If you haven’t heard of the monolithic time eater that is Bethesda’s magnum opus Skyrim, then you need to break your foot. That way you’ll have enough recovery time to play this immersive RPG. After completing the smorgasbord of side quests, picking a career and realising your true potential as a big shout dragon killer, you will fork over your hard earned cash/ms points for a DLC that turns you into a vampire and doubles the size of the game (swoon). 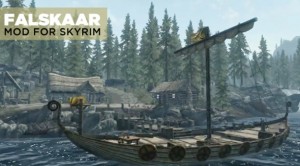 After all that, you sit down, sigh, and wonder what you’re going to do with your life.  Well, Alexander’s got your back.  Alexander who? Why Alexander Velicky of course!  After 2000 hours, 100 contributors and 29 voice actors, Velicky has created a mod for Skyrim that is comparable to the third of the map, introduces you to 54 new characters and gives you around 20 hours of extra gameplay called Falskaar. Velicky told PC gamer that he would love to work for Bethesda and explained that after high school was allowed by his father to work on the mod instead of finding a design college. “My dad was extremely supportive” states Alexander, “The best way to show Bethesda Game Studios that I want a job there and should be hired is to create content that meets the standards of their incredible development team”

Hopefully we’ll see more from this plucky modder and his rag-tag development team. In the mean time, check out the sound track here for 46 minutes of epic. To actually download the mod and further Velicky’s notoriety, click here.

Hailing from Kent, England, Mike is a writer, editor and podcaster who has just finished his degree at CCCU. He also is a drummer of 11+years, plays in several bands, and is available for session work. His other interests are Batman, music which doesn't suck and pizza. Follow Mike @The_Dark_Mike
You might also like
BethesdabreakingDLC