Today is Mother’s Day, a day to celebrate what a good job most of us mums do. A day to say thank you to the person that brought us into the world and guided us into adulthood, sharing with us traits and knowledge to enable us to become the (mostly) well-adjusted adults we are today. I’m not naive; no one is the perfect mum, we all have our failings and flaws, so I thought that I would shake it up and take a little time to look at those bad mums that have entertained us on TV.

An alcoholic spy who got knocked up and left it to the valet Woodhouse to raise her son. This woman sent poor little Sterling to boarding school for ten years and forgot to tell him she had moved. Her constant and cringeworthy need to show off her sexual prowess continues to damage her son well into his adult years, and the occasional flashbacks we are privy to confirm the emotional neglect to which Archer was subjected. Added to the fact that she lead him to believe his father had died, only to reveal his father could be a number of possibilities, further adds to her incapability as a mother. The real judge of a parent is the adult the child becomes and Archer, whilst highly skilled and capable, has grown to become a male version of his mother; an alcoholic, self-centered, bad bad human. His persistent abuse of Woodhouse, the only real parent he had, reflects the well embedded damage and hate for his mothers lack of love and affection. Malory uses her son as tool to her own ends using guilt and his ‘mummy issues’ to her advantage.

So you fall in love with someone outside of your culture and want to adapt to their ways to make your marriage work, you would think that your mother of all people would support you even if she didn’t agree with how the man’s culture behaves. Endora is blatantly human racist, she hates the fact her daughter has married outside of the witching world and makes no effort to conceal this or to get to know her new son-in-law before making judgments. Her continuing efforts to persuade her daughter to leave him and constantly getting Darrin’s name wrong, whilst a funny running joke, also indicates the lack of respect she has for her daughter’s choice- plus she turned him into a frog. We all know mothers are expected to be protective and Samantha is a strong witch who knows what she wants, a trait probably ingrained in her by her mother, yet Endora in no way respects her daughter’s chosen life style. Let’s be honest, the show was set in an incredibly sexist era where Samantha endeavoured to become the housewife she was expected to be and I understand this must frustrate Endora, but instead of taking the opportunity to befriend Darrin and open his eyes to another way, she just sits back and insults their union. 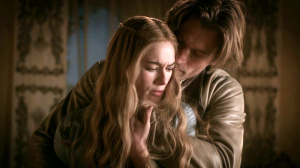 Not sure I really need to make a huge case for this one. Her children are the offspring of her twin brother, Jamie. Now I understand that during this time they did not have the genetic science and medical expertise to prove siblings breeding is, without doubt, abnormal and wrong. No, this is something the human race learnt a long time ago in its evolution, humans traveled far to widen the gene pool.  These two knew it was wrong and hid their incestuous relationship, going as far as attempted murder of a child to do so. Yet a no point did she put an end to it for the sake of her children or marriage. I don’t doubt that she loves her abhorrent offspring and is clearly concerned for their safety  but she obviously can’t parent- Joffrey is an obnoxious, sexually deviant, power mad, man-child. Though I am willing to accept this could be a result of his tiny gene pool and maybe not just down to her parenting, but either way it is Cersei’s fault. 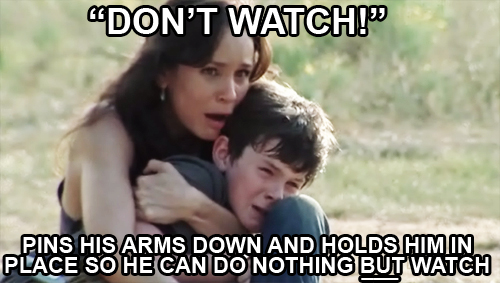 So it’s the zombie apocalypse, not an easy time for a parent what with all the running and dying and murdering of turned friends. So it is perfectly acceptable for some of your parenting to go out the window, you know, for the sake of survival. But I have two words for you “Where’s Carl?” Yep, it is the ZA and this mother doesn’t even know where her son is. A simple trip to the supermarket is enough for me to be hyper aware as to the location of my children whilst I battle through the hordes of eager shoppers, so if it was the ZA I am absolutely sure that my dearest would never leave my sight, I would even go as far as to suggest I would somehow attach them to me so there is no sneaking off. But Lori is like ‘Yeah whatever I’m talking to these guys go play, son’. Seriously, watch the episodes as they go further and further into the horror she watches their lad less and less and as a result he morphs into an unemotional and brutal creep fest. 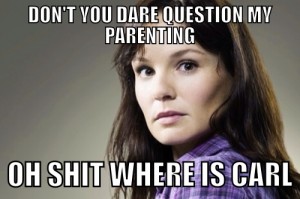 Rick, unfortunately, is leading the group and generally being badass at protecting and providing for everyone so can be forgiven for lacking as a father. But Lori has no such excuse, she has no defined role in the group so the very minimum she should be doing is protecting Carl. But her blatant disregard for son’s life is not her only parenting fail. Oh no, this woman went and got herself knocked up, seriously, every day is a fight to survive with barely enough rations to feed the quickly dwindling number in the group; with no established safe and secure base to at least give you a little sense of normality. So why in light of all this badness she thought some unprotected sex with her ‘supposedly’ dead husband’s best mate was at any point a good idea. *Spoilery and don’t get me started on how getting pregnant caused her son to have to do one of the most traumatising things any child could ever experience. The horror of her reality should have been enough of a contraceptive. Worst. Mother. Ever.

There are so many more I could add to this list, but alas it is Mother’s Day and I must leave you and indulge in a rare opportunity to ignore the usual household chores and take hold of the remote or lose myself in a little gaming. Feel free to add your suggestions of bad mums that should have made this list, in the comments below.

Editor and occasional writer for Geek Pride! I prefer Star Trek over Star Wars, collect comics and wish I could be a superhero one day. I tabletop RPG as well as a little gaming, design the odd t-shirt now and again, update my Geek Parenting Tumblr and when I have cash to spend (which is rare) I scour the internet for Wonder Woman collectables. Also Doctor Who and Firefly rock!!
You might also like
ArcherBecca Harperbecpuss