Tears of a Regained Childhood – Blood Bowl is back!!

For those of us that are over a certain age, we have many fond memories of some of Games Workshop’s forgotten games and properties. They started looking back at these recently, starting a few years back with Space Hulk. Their recent push to release boxed games that double as a cheap way to buy new miniatures have cheered up many a gamer, too, but now they’ve officially sanctioned an older game that never really went away – Blood Bowl!! 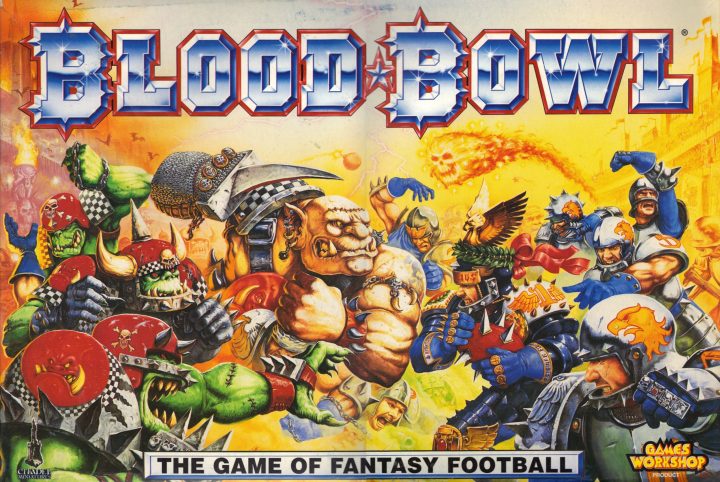 Originally released in 1986, Blood Bowl is essentially American football, slightly twisted and set in the Warhammer Fantasy universe, with 11 players to a side. It has been run by the community in one form or another since about 2002, tentatively sanctioned with a Living Rulebook, and more recently the Competition Rules Pack. This meant GW were happy for people to keep playing without any investment from GW, as players agreed on how the rules should develop. People could buy older teams on eBay, or bought and converted newer GW Minis. There were also computer games released in 1996, 2009, and 2015, based on the rules with varying success, and Fantasy Flight released their Team Manager  card game in 2013.

With annual competitions (Thrudball!!) and leagues happening across the world, Mantic Games tried to tap into the enthusiasm with their Sci Fi take on Blood Bowl, Deadzone, in 2013. The Kickstarter was very popular, and it enjoys a certain amount of success, but it hasn’t found the same place in gamer’s hearts that Blood Bowl does, even 30 years later.

This year, at Warhammer Fest, GW confirmed they were producing a new version, and today they confirmed the release of a boxed game, containing the Orc and Human Teams, a Skaven Team box set, and an updated version of the Deathzone expansion book, containing rules for teams and star players for the Skaven, Nurgle, Dwarf, Elven Union, High Elf, Dark Elf and Wood Elf races, along with advice to run a Blood Bowl League. Titled Season 1, There are undoubtedly more teams to come, and who knows what else. It seems to be not just a new physical set and minis, but a mix of the CRP rules with some details from past versions, including event cards.

They don’t appear to have moved Blood Bowl into the new Age of Sigmar universe at this time, so no Orruks or Sigmarites! Just good old fashioned Orks, Empire, Skaven and a variety of Elves.

As an interesting note, they appear to have included a money off code for the Blood Bowl II computer game in the box!!

Blood Bowl Season 1 is available for pre-order from GW or your local stockist today, and are released on the 25th November – See you in the dugout!!!

I'm just this geek, you know? Love comics, though not a regular reader - Love gaming, PC, board games and wargaming, and reading Sci Fi. Chairman at my local wargaming club, I play X-Wing and occasionally 40k (But mostly X-Wing!) By day I work in eCommerce, by night I'm either still working, reading, watching or writing :)
You might also like
Blood BowlGames WorkshopGW