There’s been a lot of speculation about the cast for the upcoming Star Wars movies, and I just recently discussed it with a friend of mine. He said that the best candidate for the upcoming Boba Fett feature was Jason Statham, but I disagreed. Traditionally, Star Wars has never been about big names, so a B-list actor would be better suited. Say, Timothy Olyphant. 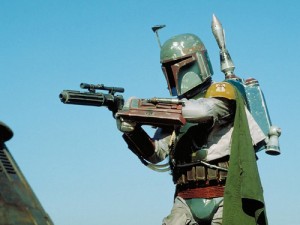 Then, it hit me – he’s perfect. Anyone who’s seen Justified knows the all-American badass of Deputy Marshall Raylan Givens. Had Raylan grown up anywhere but the crime infested trailer park that is Harland County, Kentucky, he would have been the perfect parallel for Boba. But, that being said, here’s a point-by-point as for why Raylan prepared him perfectly for Boba.

Said friend has yet to bring his points for Statham, but I’ll get back to you when he does. Until then, enjoy, junkies!

An aspiring filmmaker coming from a military family, my solitary life allowed me to gain an intimate knowledge of geekdom. I specialize on horror and military, but I am also knowledgeable on science fiction, fantasy, comic books and classic cartoons.
You might also like
BobaBoba Fettbreaking