Straight to the Point : More miss than hit, but the high points make up for it.

It’s been a slow, bleak and generally shitty month. It’s hard to say which I hate more: being owed money by people or owing money to people. But hey, at least we have comics!

Naturally, we didn’t pirate any because our glorious leaders have decided to make all UK ISPs block The Pirate Bay. Because, as we all know, TPB is the only way for anyone to illegally obtain information. Congratulations, government, you’ve stopped piracy in the UK!

*cough* Anyway. So, the long-anticipated Watchmen prequel, the imaginatively-titled Before Watchmen, is finally hitting shelves. Although Alan Moore and even, surprisingly, Dave Gibbons are all like “Uh, why is this a thing? Don’t make this a thing, don’t buy this thing” I am nothing if not curious. Also my standards for entertainment are notoriously low (I like the Resident Evil films, that pretty much says it all) so I figured I might get some light enjoyment out of it.

The reviews will be brief, but I make no apologies because I have the complete AvX and The Invisibles to get through. 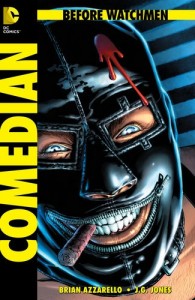 The Comedian is a beautiful paradox; a violent unstoppable sociopath who is somehow the only person empathic enough to realise that such dark impulses rest in the hearts of us all. So it’s a bit jarring to see him playing ball with his good chums Jack and Bobby Kennedy. Weirder still are Jackie O’s repeated assertions that the Comedian loves them, whilst he constantly insists he respects them. I’ve seen subtler gay undertones in Seaman Cox: Love on the Seven Seas. It was brilliant to see Comedian and Moloch connecting over the death of JFK, but I didn’t quite buy the “everyone was devastated” angle that was taken. I didn’t understand why possible drug-dealer definitely pimp Moloch was so attached to the progressive democratic president. Then again, I’m an ignorant limey so there’s probably something I’m missing.

The Comedian killed Marilyn Monroe as a favour to Jackie O. I would’ve put a spoiler alert in front of that, but it’s over so quickly it hardly qualifies as a plot point at all. The mysterious death of one of the greatest cultural figures of all time was reduced to six panels. SIX. FUCKING. PANELS. And aside from that one incident and a couple of good-natured uses of the word “fuck”, it’s a softer, more huggable Comedian we’re seeing here. Not sure if want.

Rating: 3 happy faces out of 5 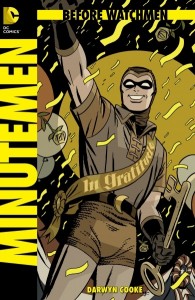 The Minutemen could easily work as the in-universe abridged graphic novel of Hollis Mason’s autobiography. Basically, the first Nite Owl’s book ‘Under the Hood’ serves as the narration for the story, and it works, although it takes a couple of pages to get into its stride. It’s worth sticking with, purely for the sentence “Deep keening animal sounds splitting the night air over and over, punctuated by blubbering pleas and desperate intakes of air” which as close to Moore as we’re going to get.

The characters previously established in Watchmen remain true to their personalities- Silk Spectre is peppy and charming, the Comedian is unpredictable and sadistic (how unfortunate that his solo comic has watered him down so much) and Hooded Justice is as mysterious and ruthless as his name implies. Silhouette, however, was a bit of a disappointment. I was fascinated by her when I read Watchmen; no mean feat considering all we knew about her then was what she looked like, and that she was a dead lesbian who uncovered a child prostitution ring. Now they’ve felt the need to add “escaping the Nazis” to her backstory, which seems to be thrown in just to add a bit of depth. It’s sad that the Holocaust has been reduced to something writers use for instant character depth. But hey, maybe it will actually be deconstructed and covered in more detail in later issues. Maybe. But I wouldn’t bet on it.

Rating: 4 costumed crimefighters out of 5 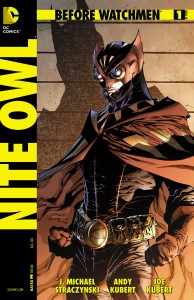 With his incredible intelligence, Nite Owl-dedicated shrine of a bedroom, and daydreamy ways, Daniel Dreiberg seems like he has Asperger’s. Which makes so much sense. I think, along with Minutemen, this comic best captures the mood of the original. The scenes of the original Nite Owl in action have an almost cringe-worthy Golden Age charm, but turn the page and you’re confronted with a scene of Danny’s dad beating and raping his mum. It’s a lot less subtle than Watchmen, but times change and you need to be a little more extreme to acheive the same shock value these days. The full-page image of Danny walking into the Owlcave for the first time is so simple it’s brilliant: far from Bruce Wayne’s multi-storey theme park of a secret hideout, the Owlcave has merely a gun rack, the costume and Owljet, and a study/library corner. It manages to convey both a sense of awe, and the realisation that yes, this is just the one guy working out of his basement.

The one area where this falls flat is when Rorschach appears. This Rorschach appears to be less maladjusted sociopath, more adorable android. He makes attempts at humour, amusingly misunderstands other people’s attempts at humour, and -when Laurie turns up in her leave-nothing-to-the-imagination Silk Spectre costume- makes no misogynistic comment at her, but simply observes that Nite Owl must have an erection. Oh dear.

Rating: 4 owl-related gadgets out of 5 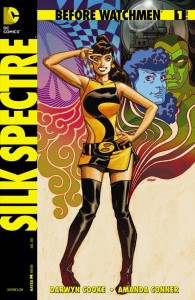 Silk Spectre is a decent enough tale of teenage rebellion: high-schooler Laurie Jupiter had a turbulent childhood, and is now rebelling against her mother’s constant demands that she take up the Silk Spectre mantle. She also has a crush on a boy. The boy has an abusive father and wants to run away just as much as Laurie does- not that it matters, because his sole purpose is to play the role of First Love. You could replace him with a David Hasselhoff poster and the story would still work. The first issue ends with Laurie and Boy getting on a VW camper with a bunch of dope-smoking hippies (gettit? because it’s the 60s!) and driving off somewhere, presumably Woodstock.

Rating: 3 psychedelic peace signs out of 5

At the time of character creation, Laura Maier made the mistake of putting all her points in charm. While this was probably an unwise decision, it's served her well so far. Her power animal is the platypus.
More Goodness
before watchmenbreakingcomic