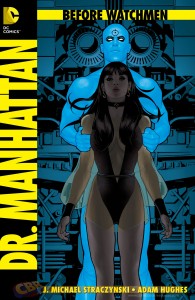 Who am I? Who are you? What day is it? What am I? Why am I? What’s my purpose in life? When is purple? Are you an angel?

So runs Dr. M’s inner monologue, for pretty much the entire comic. It manages the nifty trick of simultaneously puzzling you with non-stop questions that aren’t quite as clever as they think they are, and boring you with yet another rehashing of yet another origin story.

The big blue guy sits on Mars, reflecting upon his life as Jon Osterman, a handsome young man who genuinely prefers fixing clocks to going on a road trip with a buxom blonde. I am no expert on the inner workings of the male mind, but I am 98% sure that no man in history has ever thought to himself “Well, gee, I’d sure like to go on a beach adventure with this flirty woman and her colossal breasts, but I REALLY NEED TO FIX THIS CLOCK.”

Weirdly, though, just as you’re being lulled into a fuzzy warm cloud of faux-intellectual ennui, it actually hits the mark, with a twist ending that made me want to read the next instalment. Unfortunately, this does nothing to redeem the word soup that came before, instead just filling you with a sense of frustration- why was the whole comic not up to this standard?

Rating: 2 neon blue schlongs out of 5 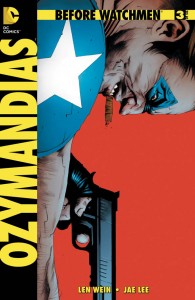 Mr and Mrs Veidt emigrate to America because they know, they just know, that their unborn child is destined to be president. If you’re finding this hard to swallow, I can assure you that it only gets worse. Don’t worry, I’ll make this quick.

Little Adie Veidt is a genius child, who must pretend to be less of a genius because his school apparently doesn’t like intelligent students. Or whatever. Then he gets set upon by bullies, providing a predictable catalyst for him to start learning martial arts. So he goes home, covered in bruises, and his parents are understandably somewhat concerned. Fortunately, baby Adie has the solution. “Patience” he tells his parents, which is apparently enough for them to think to themselves “Oh, our young son has this under control, fair enough. Let’s go watch Deal or No Deal”. Naturally, Adie is the fastest learner and best student at the dojo, and beats up the bullies in literally no time. His parents die in a car crash or something, I don’t know, Adie doesn’t even care so why should we? Then he goes on a journey to follow in footsteps of Alexander the Great, Did you know Alexander the Great was an amazing conqueror? It’s OK if you didn’t because this comic will beat you over the head with it until you have a concussion. He gets straight off the boat and tells a bunch of hench Turkish thugs to back off, and they are so cowed by his awesomeness that THEY DO. But the writer seems worried that we don’t understand that Adie’s a badass, so he beats up those same thugs several months later. Seriously. Same guys.

Oh, and then there’s the love interest. She’s not so much stuffed in the freezer as she is created specifically for the freezer. She’s like that cut-price lasagne that you get from the frozen section and leave at the back of the freezer for moths but never eat. She turns up -and I am not exaggerating even a tiny bit- tells Adie how fantastically smart, talented and wonderful he is, gets in a tizzy because he’s so preoccupied with being brilliant, and ODs on drugs and dies, prompting his metamorphosis into Ozymandias. All in the space of about five pages. It’s horrifically misogynistic, and worse, it’s lazy writing.

The only, ONLY redeeming feature this comic has is the sick pleasure you get from reading something so terrible. Like bad fanfics, or Liz Jones.

1 thinly-disguised Mary Sue out of 5 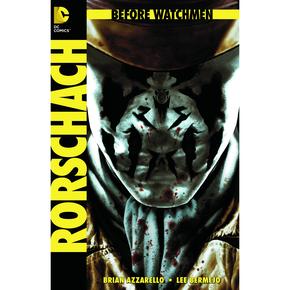 I don’t think I’ve seen an opening this good in a long time: an unseen figure carving a macabre poem into a naked woman’s flesh with a scalpel. The art is amazing, you’re almost afraid to touch the page for fear of getting some horrific disease from the dodgy end of town. Even the lettering is good- typewritten X’s obscure half-written words which could just be mistakes or could be some sort of clue.

I was a little apprehensive about Rorschach being a headliner, as I feel he works better as a narrator, a mysterious faceless side character, which made his ultimate reveal as Just Some Guy to be all the more jarring. But so far I needn’t have worried. Oh, there’s the odd bit of un-Rorschach dialogue (“Bitch to be you right now” being a particularly cringe-worthy example), but there’s enough strong moments to pull the comic through. Rorschach takes a brutal beatdown, reminding us that he’s not the invulnerable badass that pop culture has warped him into, but gets up to fight another day. A true hero indeed. You know, apart from the misogyny and fascist leanings.

3 psychologically-revealing ink blots out of 5

Obviously none of the mini-series get close to the simple power of the Moore/Gibbons original, but then we knew that. Some get close (Nite Owl and Minutemen) some try a bit too hard but have potential to get better (Rorschach, Silk Spectre) and some are so off the mark that they should be burned and never spoken of again (Comedian, Ozymandias) On the whole, I think that it’s been a hit-and-miss endeavour, and sadly, the hits don’t make up for the misses.

There are some jewels amongst the muck, but they’re so few and far between that it makes you wonder why they bothered. If they’d put all the jewels into a single Minutemen series, it would be a lot closer to the original in quality and tone. Personally, I’ll be keeping half an eye on the series as they develop, but with such a patchy start my expectations are suitably lowered for the rest of it.

the writers and artists are:

At the time of character creation, Laura Maier made the mistake of putting all her points in charm. While this was probably an unwise decision, it's served her well so far. Her power animal is the platypus.
More Goodness
before watchmenbreakingcomic