previous
Comics Unmasked – Art and Anarchy in the UK at The British Library
random
next
Zarjaz News as 2000AD Sells out at Distributor Level for the First Time Ever!
Books and Comics
0 likes

Breath Of Bones – A Tale Of The Golem

Engrossing story that builds to a cathartic crescendo.
Stunning evocative art you can lose yourself in.

The brevity of the story might be a problem for some.

Part war story, part monster story, part tale of childhood lost and part tale of good ultimately triumphing over evil. A reminder of what can be achieved in sequential art far removed from the narrative cul-de-sac of superheroes.

Breath Of Bones – A Tale of the Golem opens up on April 1944 and a group of soldiers, dug in and sheltering against opposing forces. There are men running for cover surrounded by the bodies of the fallen, explosions, and the usual carnage normally associated with warfare. It’s here the narrative begins as one of these soldiers, a Jewish conscript, while running from cover to cover amidst enemy fire recounts a tale of his youth. 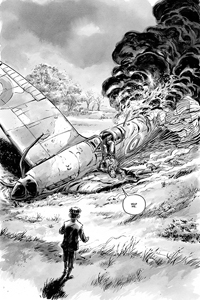 Going back to the soldier’s childhood, the German threat slowly but surely working its way towards him, the soldier remembers his father, along with the other able bodied men of his home, going off to join the fight, leaving only the old, women, and children behind, hoping that the Germans will avoid them. It is, however, on the outskirts of this small Jewish town that a British plane crashes, soon changing things dramatically for everybody.

Incorporating the Jewish folk tale of the golem into a World War II story, Breath Of Bones’ packs a lot into its pages; part war story, part monster story, part tale of childhood lost and part tale of good ultimately triumphing over evil. 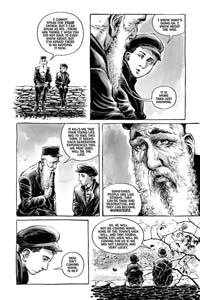 While it could be said that those completely unfamiliar with the idea of the golem may be left a bit puzzled, the essence of the tale is well known (the most famous example being the Golem of Prague) and has manifested in various mediums, featuring in an episode of The X-Files as well as numerous other films and TV shows.

Regardless, this is a powerful tale and, while the story may be slow to build, it’s momentum eventually reaches a cathartic crescendo without overplaying its hand and making it all the more effective for its brevity.

Steve Niles is a name more commonly associated with horror comics  such as 30 Days of Night (arguably his most well known work) or the hard-boiled noir-infused Criminal Macabre. Here Niles, along with fellow story plotter Matt Santoro, has come up with something different and it might just be Niles’ best work yet.

While the waiting-for-trade mentality definitely has a corrosive effect on comics, the collected edition of Breath Of Bones’ is a thing of beauty. The over-sized format allows the reader to get lost in Dave Wachter’s stunning art making Breath Of Bones impress with every page. Wachter’s art is so rich with detail, his characters so well crafted and his gift for capturing emotion so well that this story would be effective even without dialogue and the lack of colour adds an air of authenticity to the setting.

A reminder of what can be achieved in sequential art far removed from the narrative cul de sac of superheroes and the big two.

Andy Haigh started writing to counteract the brain atrophying effects of Retail Hell, now it's an addiction. Andy is an unrepentant sequential art absorbist and comics are one of his passions. Other interests include Film, Music, Science Fiction and Horror novels and quality TV like Game of Thrones. He can talk about these at great length if only someone would listen. He lives a somewhat hermit like life in The Shire, spends too much time on social media and is still waiting to go on an adventure.
More Goodness
breakingcomicsdark horse