Times have been tumultuous for the long-term Joss Whedon fan. I should know, I can sing the backing harmony parts for ‘Once More With Feeling’ (if you don’t understand, please don’t ask). Once our favourite characters, be they Slayers of the Vampyr or Space Cowboys, have left our screens, we cannot help but wonder where they ended up after.

Buffy and Angel have both lived on in comic book form. Throughout Buffy’s run on TV, there were comics that ran alongside the series. These filled in plot-holes, gave back-story to characters and embellished on themes from the series. In 2007 a canonical 8th series began that carried on 40 issues until 2011 when the 9th series was announced. 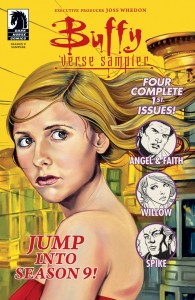 Buffy Season 9 follows on directly from the Seed of Magic being destroyed and Rupert Giles’ death. With no more magic, Willow is seriously peeved, all newly sired vampires are mindless, rampaging “Zompires” and we are introduced to a bevy of new characters. We meet Billy the Vampire Slayer, the gay teenage boy who learns to fight to defend himself against homophobic school bullies. When his town is attacked by zompires he uses his skills to defend his friends and gains a “Watcher” in the form of his classmate and long-term crush, Devon.

In the meantime, Willow goes on an interdimensional hunt for a way to bring magic back to our world. Spike gets seduced by a succubus on a spaceship full of talking cockroaches. Dawn and Xander settle down to a quiet home-life together. Buffy meets Severin, a man who can drain what is left of the magical energy in the world to make him stronger and a San Fransisco Police Officer called Robert Dowling who is, essentially, useless.

Angel & Faith follows on from Season 8 also and directly ties in with the events in Buffy Season 9. Angel and Faith LeHaine team up to fight evil. It is soon revealed that the “cases” that Angel is following are preparing them both for the task of resurrecting Giles from the dead. They soon find themselves in London and introduced to Pearl and Nash, two super-powered vampires who were allies with Angel in Season 8 and are after blood, as Angel betrayed them when he swapped sides (again). Returning favourites include Whistler, Angel’s mentor, and Drusilla, Spike’s ex. 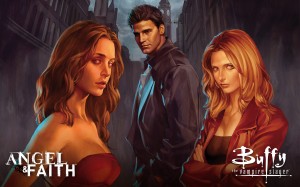 After Buffy Season 8, fans were left very divided. Joss Whedon and other long-time Buffy writers were involved throughout and felt that they could explore stories that would have never worked on a small-screen budget. This allowed them to:

Fan reaction was brutal, although many were happy to see the Scooby Gang back in action, the writers received so many complaints that the overblown action detracted from the character development and the idiosyncratic dialogue that they vowed to “reel in the crazy”.

This fan displeasure led to a complete turnaround for Season 9, focusing a lot more on characters rather than action. The action is on a smaller scale but there is still plenty of it, with vampires initially the biggest problem. Even so, the series starts slowly, focusing on Buffy, her fairly forgettable housemates, her new forgettable police friend and a gay teenager who dubs himself Billy the Vampire Slayer after protecting his hometown against vampires.

Joss Whedon and Andrew Chambliss seem to put a lot of time into establishing these new characters into her life, while the usual show favourites are sidelined. Xander and Dawn are quickly paired off out of the main storyline, Willow goes on her own solo adventure, Giles is out of the picture and Spike leaves to get over Buffy. In this time, the Buffy series still felt listless and boring.

There are a few interesting themes tackled. The Buffy abortion storyline gained the most media attention and acclaim. When approached about this, Joss Whedon had this to say: “It’s a very difficult decision for her, but she made a decision that so many people make and it’s such a hot button issue with Planned Parenthood under constant threat and attack right now. A woman’s right to choose is under attack as much as it’s ever been, and that’s a terrible and dangerous thing for this country. I don’t usually get soap box-y with this, but the thing about Buffy is all she’s going through is what women go through, and what nobody making a speech, holding up a placard, or making a movie is willing to say.”

Fans of Joss’ decision to tackle such a touchy subject were incensed when it was revealed that Buffy could not have been pregnant in the first place (read it to find out why). Many felt that this revelation made her choice completely futile, depowering the pro-choice message while others felt it did not matter as it was the choice itself that carried the most meaning. 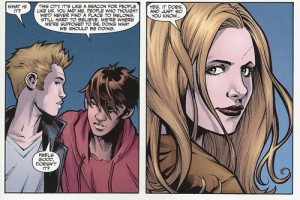 Another of the interesting themes was the saga of Billy the Vampire Slayer. It tackled themes of homophobia that Joss had already investigated in the TV series with Willow and Tara but felt very natural, shifting focus from Billy and Devon’s gay relationship to whether a man could be a Slayer. The sentiment was one of acceptance and moved the feminist metaphor of empowered Slayers to and more wide-spread egalatarian stance; although it was an involving and touching tale, it felt like a detached aside from the main story-arc.

Eventually the series picks up pace, especially when the gang are reunited against a “Big-Bad” and have to save Dawn from peril (just like old times!) with a big reveal ending that leads the reader curiously into the impending Season 10. 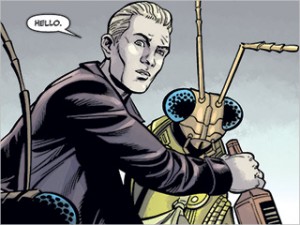 Spike and Willow both got a 5-issue mini-series. Spike adventures off on a brooding quest in his spaceship while trying to move on from his feelings for Buffy, angering Spuffies (fans of the on-screen chemistry between Spike and Buffy) everywhere. He meets a succubus and lives to tell the tale, moving over to the Angel & Faith series. It is worth mentioning that the character licence for Angel recently reverted from IDW comics back to Dark Horse. This is great as it allows for the free-roaming of Angel characters to crossover to the  Buffy titles (also Dark Horse) and vice-versa.

After a brief appearance in Angel & Faith, Willow sets off on her own journey. Her mystical journey brings her back in contact with characters from the Season 8 comics and the TV series on a wonderfully illustrated, lush world full of beauty, horror and Gaiman-esque creatures and goddesses galore! Written by Jeff Parker and Christos Gage and pencilled by Brian Ching it is a pleasure to read and by far the most rewarding part of Season 9 apart from Angel & Faith. 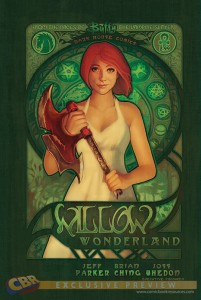 NOW we’re talking! Angel & Faith is a fast paced romp and a half! Angel did something very, very bad at the end of the last season and now, he and Faith are trying to put it right while facing many larger than life foes. Their escapades are reminiscent of a buddy film with an undercurrent of Angel’s trademark atonement. The best additions to the cast are Sophronia and Lavinia Fairweather, Giles’ great-aunts (originally intended for a Ripper TV series, focusing on Giles’ time in the Watcher’s Council and before, and were to be played by Anthony Stewart-Head’s two daughters). The dialogue between these British, sarcastic, anti-heroines and the jaded and blunt Faith is often hilarious, and juxtaposed perfectly with Angel’s renewed purpose and stoic single-mindedness.

Angel’s plan to redeem himself goes awry with results that have huge impact on the overall Buffy mythos, both hilarious and touching, as Giles’ story arc is brought full circle. The dialogue is spot on, invoking the original cast members perfectly, and the action leaps off the page. Where the Buffy title seemed wandering, Angel & Faith kept me turning pages rabidly with a perfect ratio of action to character development that managed to explore the insecurities of the main characters. It concludes with a huge stand-off between all of the main players of the season with a plot to bring magic to London that is dark, grim and lends itself to some fantastic artwork. 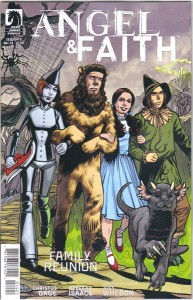 If you are a hardcore Buffyverse fan then I would recommend both series. If shelling out on both series and the two spin-offs is a bit much then stick to Angel & Faith and the Willow spin-off as they contain more than enough of all the key elements of Joss Whedon’s great story-telling and enough plot twists and cameos to keep long standing fans interested. If you are new to all things Buffy then you should start watching now and you may have caught up by the time Season 10 is on the shelves.

Owen was born with a S.N.E.S controller in his hands and now works in a comic book shop and pretends to be a pirate on occasion. He has an unconditional love for the works of Joss Whedon, Felicia Day's face and Leek and Potato Soup.
More Goodness
AngelbreakingBuffy the Vampire Slayer