That scared the crap out of me and now I might need therapy for the foreseeable future. For the 50th anniversary of the children’s classic, Penguin chose a new cover. One that actually made my blood run cold, the fear gripping me like a vice as I scrambled for ways to break away from the cold, calculated gaze of the obviously murderous child featured on the cover. 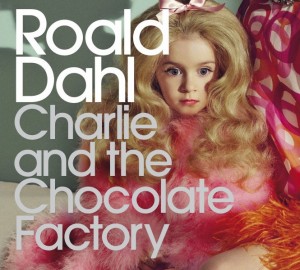 Is it too early in the day to call for the Exorcist?

While I am sure the intention behind this was good, and here you have it in the words of the Penguin editors,

This new image for Charlie and the Chocolate Factory looks at the children at the centre of the story, and highlights the way Roald Dahl’s writing manages to embrace both the light and the dark aspects of life, ready for Charlie’s debut amongst the adult titles in the Penguin Modern Classics series.

the execution fell rather flat. There is nothing stopping a less creepy cover from attracting both children and adults. Charlie and the Chocolate Factory has been around for five decades, I’m sure it’s already a staple of literature, without adding this particular kind of controversy, in order to get some cheap publicity. To be honest, if I were to have to buy this book for a child, I would do my best to find one featuring one of the old covers.

See? Zero creepy factor. Why would I want to traumatize some young child with a book cover that looks like it was ripped from some ’60s horror film featuring more than one murderous child? The book already features enough of life’s darker aspects, without adding this to the mix. But that’s just me. 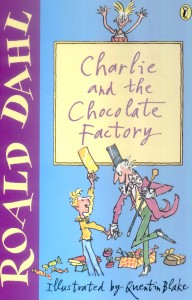 Aww, a nice old man, a golden ticket and candy strewn around?! Take my money!

I suppose it really is an easy way of gaining publicity. Odds are that they will change the cover at the last moment, but hey, they already created the buzz, now people will spend their time discussing what has been done and there’s no bad publicity, right? I suppose we’ll see in about a month’s time how the final product will look like and if parents will have to shield their children’s eyes when they go past the particular section in the bookstore that this one will be featured in. In the meanwhile we’ll keep an ear out and let you guys know of any new developments. (As long as it doesn’t involve me looking at that picture for too long, it creeps me out.)

What's there to say about me? I love the sci-fi and fantasy genre when I read, but I am in no way limited to that alone. I do think Frank Herbert deserves a statue for his writing(if there is one, point me in that direction, please). I enjoy writing quite a lot, but I am also kinda lazy. If you want to make me happy give me books or Doctor Who collectibles. Or a real TARDIS, in which case I will love you forever.
More Goodness
50th AnniversaryCharlie and the Chocolate Factorynews