Disjointed in places
Slow to start

Nice guy Chris Smith talks to God via various means, and one drunken evening ends up making the decision that leads to Nazi zombies being unleashed from the depths of Hell. You know… as you do. This kids, is the first issue of indie comic Chris Smith and The Nazi Zombies From Hell from writer Julian Burrett. 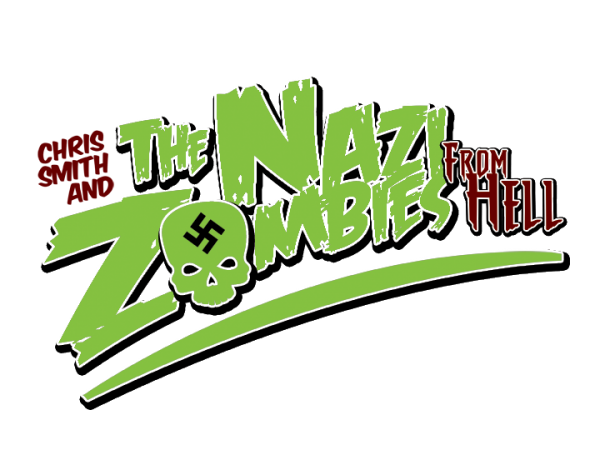 Setting the scene, the comic introduces the downtrodden characters of Chris Smith and Tina Tandy, residents of my current hometown Swindon in 2020 (I always knew the apocalypse would start in Swindon!). Chris is the nice guy – always misconstrued & always seemingly alone, and Tina was up until recently the punchbag for her latest boyfriend. Chris talks to God, who talks back through his fish (initially), and later a dog and a kebab.

The two characters get thrown together, and when Tina’s mum goes missing thanks to a local politician running for office, a drunken plan is hatched to combat the menace. Of course as dunken plans go, this is probably one of the worst possible solutions dreamt up: combat the current oppressive regime by resurrecting the most prolific oppressive regime in history to fight them.

Through Chris’ connection to the almighty via the aforementioned kebab, he manages to make this happen just before he passes out. That’s the synopsis in a nutshell, and it’s suitably bonkers. 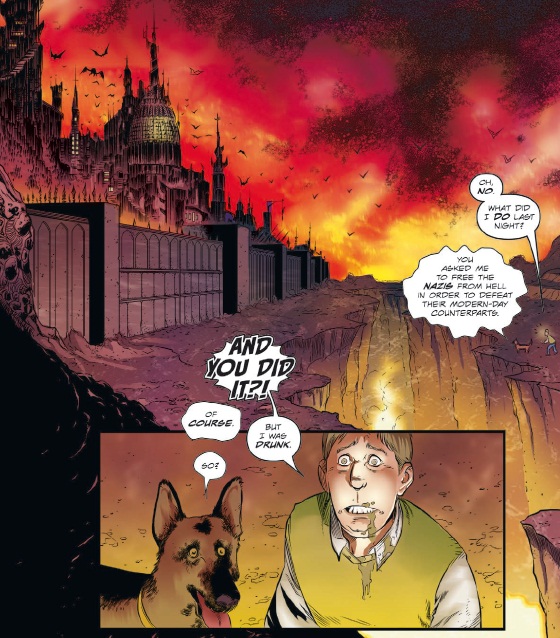 Chris’ inebriated wish comes true, and he quickly regrets it.

The start of this comic is like a slow wind-up to a movie – it brings in the characters and starts the story gradually… making you empathise with Chris who perfectly fits the old adage “Nice guys finish last”. Tina is introduced as the strong-willed woman who won’t take any shit, quickly demonstrated by her throwing a hot beverage over her former boyfriend as penance for giving her a black eye.

You’re then briefly introduced to Hermann, a naked drug-obsessed slob living in what appears to be a urine-soaked cell – this is insinuated as being his own personal hell for his life of evil deeds. This seems a little abstract really, as it doesn’t appear to connect to the story, but I imagine this will be interwoven in future issues. I like the touch of the red-eyed hooded figure giving him what he thinks are tablets so he can overdose, but he’s actually eating cockroaches and beetles.

Tina’s mother Sarah is also briefly introduced, depicting her abduction into the “hospitality” of nazi-esque politician Mr. Ffording. Again at the time this also seems somewhat disjointed as there’s no explanation for the home invasion and ensuing violence. However the following conversation between Tina & Chris, as well as the later panels showing Ffording depict Mrs. Tandy as an activist or campaigner against Mr. Ffording’s efforts to get into office.

The humour ingrained in the book from the start is initially subtle – Chris talking to God via his goldfish about inane topics like the weather, and his drunken back and forth with his kebab incite a chuckle or two… the funny thing is I’ve actually seen people talking to their kebab before – now I know why! 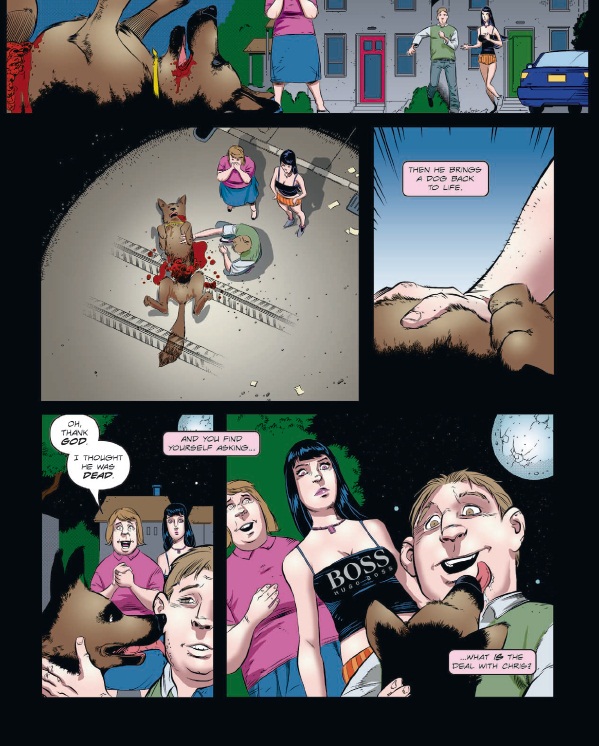 Chris brings a dog back to life and a media circus doesn’t ensue?

I did feel that Chris’ connection to God, and what Tina refers to as “magic” is accepted way too easily… the man brings a dog back to life (one that clearly shouldn’t come back to life as it’s bowels were all over the road), and he just gets strange looks, and it’s mentioned briefly in the pub later.

The artwork by Vik Bogdanovic, Ian Sharman & John Charles is great – Swindon’s grubby atmosphere is captured to a tee, and all the characters convey emotion really well – particularly the destitute Hermann while he chomps down insects.

The closing sequence of the comic with Chris’ conversation with God-dog is great, and reminiscent of something from a Simon Pegg / Nick Frost / Edgar Wright movie – this is the reason I’ll keep reading this comic.

Although slow to start, Chris Smith and The Nazi Zombies From Hell has a solid base to run from now, and it looks like it will up the tempo from issue #2. If the dark humour keeps coming from the pen of Burrett, then I imagine it’s going to get better and better.

Movie and videogame geek, basketball player, guitarist, waffle connoisseur & expert in being a slacking bastard. You'll find me gaming on PS4 as "SpasmicPuppy" most of the time... I'm addicted to Destiny.
More Goodness
breakingChris Smith and the Nazi Zombies from Hellcomic