A collection of comic news for you, and it looks to be a treat. First up, we have the Marvel news about their upcoming Post-Secret Wars. Not one, but two teams have been announced.

Okay, so first up we have the Uncanny Inhumans. We have Medusa – Queen of the Inhumans – accompanied by Naja, Inferno, Triton, Iso, all of whom have been introduced in the ‘Inhumans’ comic series.

Interestingly, we also have Johnny Storm of the Fantastic Four. Wait, what? The Inhumans and FF have had interactions in the past, but it is still pretty interesting to see him as part of this team. I mean, not a guest appearance, but as PART of this team.

Here is by far the biggest surprise – the announcement of an all-new Avengers line-up.Several things to consider here, most of all that MILES MORALES AND KAMALA KHAN WILL BE AVENGERS.

Okay, so we have an interesting team-up here. Sam Wilson is still Captain America, and will be joined by Sam Wilson (Nova), Thor (still not Odinson), an ‘Uncanny Avengers’ version of Vision, Kamala Khan (Ms. Marvel), Miles Morales (the Ultimate Universe version of Spider-Man), and an Iron Man, who has ditched his ‘Superior Iron Man’ blue-and-white for the traditional red-and-gold. Though is this the 616 universe’s Tony Stark, or another who managed to survive the Secret Wars?

And unlike the ‘Avengers NOW!’ line-up, these actually look to be the actual comics, rather than just featuring a wave of relaunched titles. 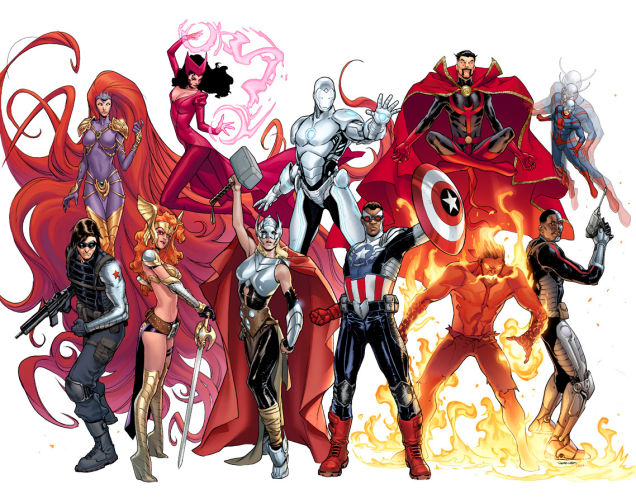 Finally, DC’s ‘Futures End’ event is coming to an end, and some might be wondering what is next on the cards for DC?

Well, how about you take a peek as co-publisher Dan DiDio himself explains the story of DC’s Convergence event and teases what’s to come.

So, we have a huge planet filled with the cities of dead or dying universes (we can thank Brainiac for this). These cities were set apart from each other by some kind of forcefield, which has been lowered in Brainiac’s absence thanks to Telos, a new villain who is tied with the planet that houses all these lost-cities.

I kind of didn’t keep an eye on ‘Future’s End’, but this one I might due to the fact that…well, I have a thing for Multiverse stories. I’ve just finished collecting all ‘The Multiversity’ issues (thank you Grant Morrison), and it looks like some of the worlds featured in this series are set to feature in ‘Convergence’. As well as a few others, including Elseworlds and Alternate Timelines.

I read. I write. I play.
More Goodness
AvengersCaptain Americacomics