by Matt Geary on 11/10/2019
Details
PublishersFictionTitan
By

Harry Hendrick is a very well written and fleshed out character. Flawed, jaded and unequivocally human, and you can't help but want to see how things turn out for him, and for him to succeed.

This could be a challenging read for some due to some of the content explored (this is more of a warning than a negative, though perhaps this should be highlighted somewhere on the blurb)

Genre bending horror fiction gives another gripping outing for flawed journalist Harry Hendrick who seems to have acquired a nose for trouble in addition to a few other things after his previous adventure.

I recommend this because: this book is darker and much more visceral than its predecessor in subject and tone. It may be uncomfortable reading for some, but Kemble doesn’t shy away from tough issues, creating a tense ride for the reader whilst drawing them into another spellbinding dark case which needs solving as a matter of life and death. 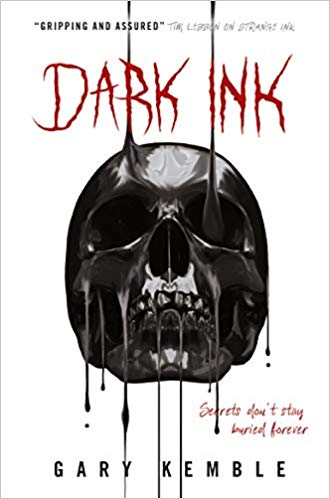 Having just finished Kemble’s debut horror, and Harry Hendrick’s first outing in Strange Ink, I couldn’t wait to pick up Dark Ink to find out what else could happen to this unfortunate protagonist since he had solved the mystery of the grisly story of the tattoos belonging to murdered Rob Johnson, which had somehow found their way onto Harry’s body, as well as uncovering major conspiracy and corruption linked to the military, politicians and his own past along the way. Thankfully I only had to wait until the following morning, and eagerly dived in.

Like the previous book, Strange Ink, the prologue throws the reader straight in at the deep end with a chilling scene unfolding which really had me questioning what was about to happen. Was this another nightmare Harry was having? Was this something actually happening to Harry? Demons?! Kemble pulls no punches here in his graphic depiction of a man wrestling with some sort of demon, whether physical or metaphorical, his desire to protect his family, and his struggle and eventual realisation that he has lost.

We then move to the main story and find Harry is fighting his corner quite literally, as he spars at his martial arts class. We very quickly establish that Harry is still tattooed, and has seemingly picked up a few other traits from his time spent with Rob Johnson.

It’s been about a year since Harry’s big scoop and subsequent brush with his own death. He is no longer at the local paper, wanting a break from the endless questions about the story behind *that* story and has instead decided to go freelance in the hope of finding another big scoop and proving that he isn’t just a one hit wonder. He needs to find it soon though, as his previous exploits are no longer paying the bills, and when contacted by a woman who probably needs a private investigator to investigate her cheating husband rather than a journalist, takes the case, especially as she offers to pay him whether he runs the story or not, but soon uncovers there may be more to this than run of the mill infidelity.

Given his freelance status and new found reputation for being a bit odd, he’s also contacted by the Queensland police, who ‘encourage’ him to look into a string of grisly deaths, all with similar notes left by the victims pointing towards atonement towards ‘the goddess’.

Once again Kemble crosses and interweaves different aspects of both horror and other genres with skill, connecting everything together in unexpected ways to a gripping conclusion, whilst bringing back supporting characters, Harry’s best mate Dave and Sandy the Psychic, giving a genuine insight into their relationship with Harry, and providing us with an alternative way to show Harry’s struggle and strife as he becomes more enchanted by Mistress Hel’s wiles. We also get to see more of Bec in this book as well, which for me, even though at times Harry was thoroughly unlikeable, provided another reason for me to cheer him on to break through and overcome his struggles. I also really liked the touches of Rob left behind after the first book, which not only serve to help flesh out Harry even more, and show his growth from the beginning of our peek into his life, but also gives a good rationale for Harry ending up involved in another bizarre and grisly story.

I do hope that this is not Harry’s last encounter, as Kemble is building up a well thought out not-so-nice world that I can’t wait to see more of!