DC Comics reminds everyone it’s all about the money.

Anyone picking up DC’s comics this month will have noticed something new that hasn’t featured in their comics before, I’m not referring to a new character or a new creative team but rather intrusive ads.

As anyone who actually picks up monthly comics will know ads in comics are nothing new, every issue from most publishers but especially Marvel and DC features several pages of ads. Generally these ads for the Big Two are for whatever licensed merchandise they are promoting at the moment (as everyone knows this market is way more lucrative than comics are) TV shows based on their properties and various other things.

Ads are one of the easiest ways for a company to gain revenue, one company pays another company for the opportunity to pimp their wares to a given audience, it doesn’t really matter what the medium is the fundamental concept is the same. The big difference this time is some of these ads aren’t the full page ads that readers will be familiar with but rather half page ads which interrupt the narrative flow of the story and impact on the art. 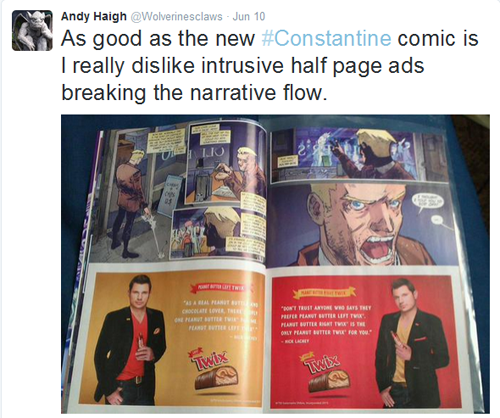 A while back there were rumours that DC might be doing this and this month DC readers found out that is actually happening, then there was speculation it would only be for a month, so why is it a big deal? This is a big deal because it has a major impact on an artists and writers creative process with the choice of panel composition and layout essentially taken away from the artist as they have to work around the space given up for for the ads.

Simply put it shows more than anything that DC cares about money first and sequential art (the medium responsible for their existence) second, something which has been becoming more and more obvious in recent years with the number of comics being cancelled for not hitting the right numbers. DC’s Dan Didio hammered this home by saying “We’ve always been the best with ads in our books, and now we have companies interested in buying ads in books. So I think that’s a good thing.” That might be great from a business perspective but it’s pretty awful from creator perspective.

Dig a little deeper though and you can see how this could potentially cripple any comic that doesn’t have a massive readership, people are going to pick up Batman every month regardless of whether it has half page ads that say “I did your mom last night and she loved it” (Note Batman doesn’t actually have ads that say that but you get my point) but it all comes down to a readers resilience and how much they’re willing to put up with something intruding on their reading experience.

There’s already plenty of people out there that just trade wait, it’s a pretty big problem for publishers as without anyone picking up the monthly comics there won’t be a trade. This is especially true for smaller publishers. This is just something to further convince people to trade wait, if a trade is going to be more affordable, have bonus content, look better on your shelf and be free of the intrusive ads that the monthly comics have then it’s pretty understandable why people don’t want to pick them up.

Whilst other publishers might be making steps to add value to their monthly comics with extra content not available in trades, like the essays found in Ed Brubaker and Sean Phillips sublime noir piece “The Fade Out” for Image, DC seems to be doing the exact opposite. Then again is this move hinging on the idea that comics fans in general like to make a fuss about things but very rarely act upon them, is the publisher calling their bluff knowing people will get a bit angry on Twitter but just pick up their comics anyway? Whilst people might be wanting to support a specific creative team they’re doing it because they get something from what they produce be it entertaining escapism or something else. How much are you willing to put up with something encroaching on that in the clumsiest way possible?

Andy Haigh started writing to counteract the brain atrophying effects of Retail Hell, now it's an addiction. Andy is an unrepentant sequential art absorbist and comics are one of his passions. Other interests include Film, Music, Science Fiction and Horror novels and quality TV like Game of Thrones. He can talk about these at great length if only someone would listen. He lives a somewhat hermit like life in The Shire, spends too much time on social media and is still waiting to go on an adventure.
More Goodness
advertisingBatmanDan Didio

Electronic Cigarettes – The Future of Smoking?