A bit of good fun, filled with Riddles, see if you can solves them before you turn the page.

Some panels needed a bit more of a visual pop!

The story is written by Scott Snyder and apparently Ray “Fakwes” an error that was overlooked in proof reading one can only assume. It should actually say Fawkes… (just saying DC).

So far, out of the comics I have read from Villain’s month this is one of my favourites; also if you enjoyed Year Zero then I believe this is one you will also enjoy. The Riddler is portrayed perfectly throughout this comic, he brings riddles to the table that play a vital role within the plot line; and he is his usual arrogant, intellectual with a grudge.

I recommending trying to solves his riddles yourself before you turn the page it’s a good bit of fun; which is capturing the traits of Riddler perfectly for the readers. You’ll see Fawkes has integrated the riddles flawlessly into giving us the villain’s evil masterplan!

The Riddler’s story is laid out perfectly from start to finish, we get a brief flashback to when Nygma was punished for contraband by an Arkham Guard four years prior.

So after the opening sequence which gives us the back story, we are shortly brought forward to present day to the post- Forever Evil world where all the villains have been set free. Though there are a few flaws regarding this, surely Gotham should be in a dire state by this time? The few resident of Gotham that are on hand are not looting, vandalizing or even forming gangs, they’re just stood behind a blockade in front of Wayne Enterprises protesting an SEC filing/misconduct scandal. In fact, we learn that the only reason the mob gathered on the Wayne Enterprise steps in the first place is because the Riddler wanted them to do so. All this being said, I must ask..

Why isn’t Gotham in shambles? How long exactly after the Arkham break-out did the city fall to ruins? What’s the timeline during this chaos? Seems like we’ll have to wait for Forever Evil: Arkham War for information.

Right, so back to the comic at hand…

So we get to see Riddler casually stroll into Wayne Enterprises… apparently one of the most guarded buildings in the world. Seemingly not the case if our villain here can just waltz on through. 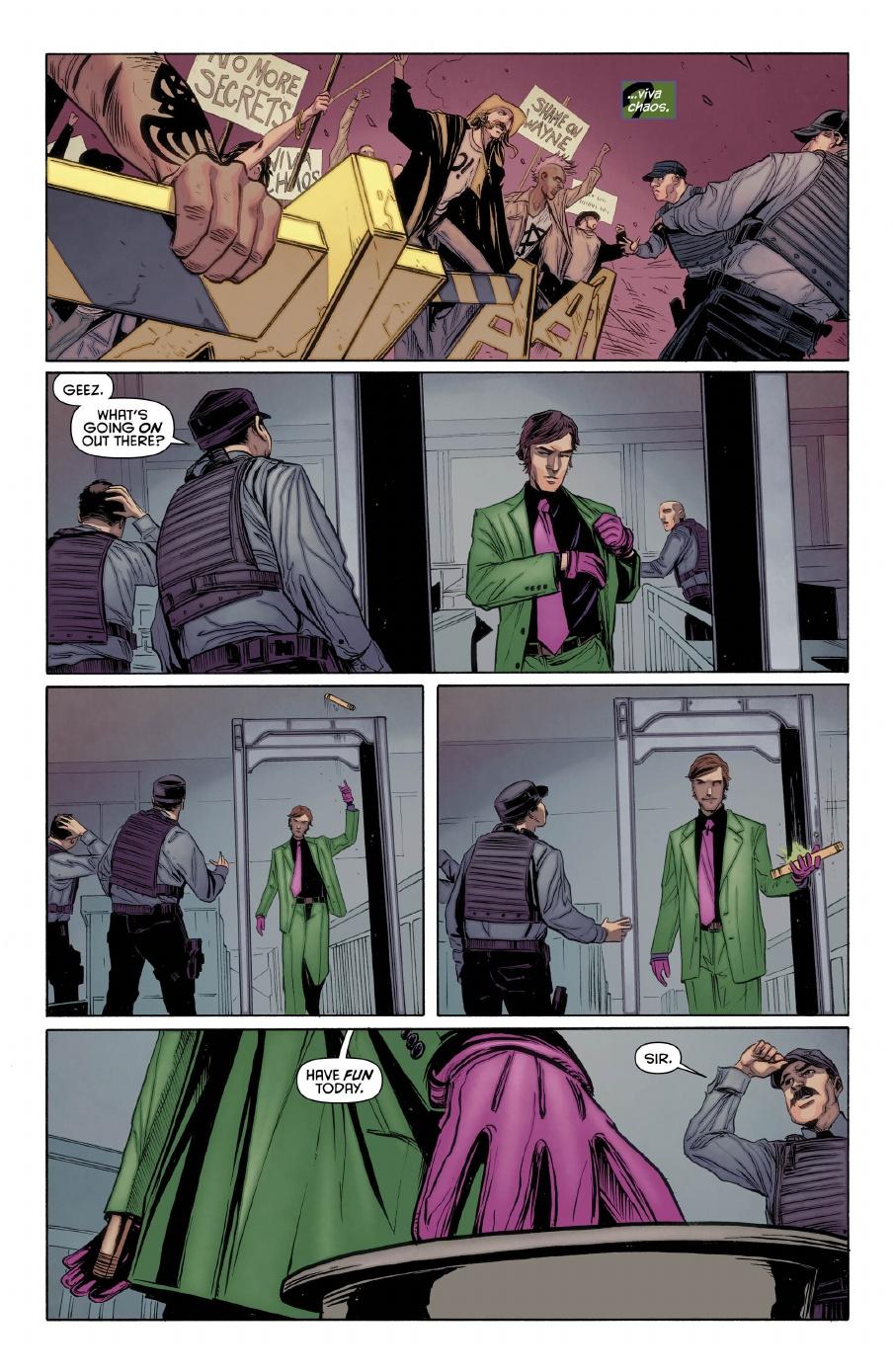 The artist working on this comic is the newly announced artist of Batwoman, Jeremy Haun; with colourist John Rausch working alongside him to illustrate this issue. I personally really like the artwork in this, I think is captures a great sense of moment, and the colour palette beautifully correlates to the mood of the story and the character (though some panels could do with a little bit extra, just to give them that extra pop!). You get a great sense of what is going on throughout the comic without even having to read a word.

What stands out for me the most is the plot line, it’s beautifully executed and makes for a good read. It doesn’t go off from what we all know about this character, it sticks to the core components of this villain.

I am Lady Noctis *waves* a small vertically challenged lady with a big heart, a penchant for comic books, and a small obsession with a character known as Harley Quinn I'm a part-time model, freelance illustrator, full-time geek and cosplayer. "I'm just another dreamer running around in a cape playing superheroes… ok, truth. I'm an aspiring illustrator who also likes to play dress up."
More Goodness
breakingcomicsDC