Doctor Who Quick Read a Quick Let Down – 5GPPs

Straight to the point: The Doctor Who “quick reads,” produced by the BBC, I thought was going to be the best value for money I have ever come across. Written by many different authors and for only a pound you get to read an original adventure featuring the Doctor, but the question remains: does it stand up to par with what I know and love of Doctor Who?

“The Silurian Gift” written by Mike Tucker, is a quick read I picked up from Amazon on a whim. Published in 2013, the story depicts a one of a kind spin off from the show featuring my favourite Doctor, Mr Eleven; I got excited. Hey, it was only a pound, why not? Well, let me inform you darling Whovians why not.

When I first got the book in the mail, a sense of suspense ran through my body. The cover  promised what the story didn’t achieve.

The storyline goes: the Doctor ends up at a site in the coldest part of the world, where a scientist has discovered what he terms, “Fire Ice” which will revolutionise the way the world will use fuels from now on. As we go on, we find that he didn’t actually discover this material but it was a gift from the ancient original inhabitants of Earth, the Silurians.

Mr Pelham, the “genius” scientist however has a darker motive. He is holding the Silurians hostage, using them to gain more and more Fire Ice for riches, however, one has got away from his evil clutches. Now free from him, this little Silurian turns to hatred for not only Mr Pelham, but the human race as a whole and seeks revenge. Can the Doctor stop both the little Silurian and Mr Pelham before the entire world is destroyed?

Yes, of course he can, he’s the Doctor. While the storyline is strong, the execution leaves a lot to be desired. The writing style seemed to be lacking the maturity and skill that I enjoy in a book. It could almost be described as a fanfiction; this is the air and feel that emanates from the pages. 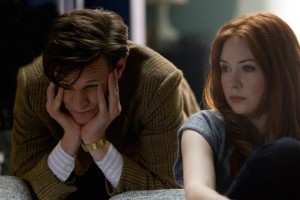 Reading through I found at parts I was struggling to pay attention, and that is one thing that any type of media should avoid like the bubonic plague. Although I will take this time to admit that there were parts, not many, but there were a couple, that made me chuckle as the Doctor’s personality shone through and in my mind’s eye, saw him act it out as he would on the TV.

However, I think that’s the thing. I am a huge fan of the TV series, and I would watch those episodes over and over again until the TV was hoarse with shouting “Don’t blink!” but the translation to book leaves a lot to be desired from this particular author.

It may be because of the writing style of the author, or the disjointedness of the story from the main show. I think it is both and neither of these, with one extra element here. On TV, you can really understand the workings of a complicated mind, as you get to not only hear but see the expressions, the reactions, the sheer epic-ness that is the Doctor Who series at this time.

All in all, an ok read. It still holds some of the charm and sophistication that Matt Smith brings to the screen but the execution is somewhat poor. I mildly enjoyed the book, but boy did I struggle to finish such a short story.

Here is me in the form of a haiku: My name is Jodie, Love fun, love hugs, loving life, To write is to be.
More Goodness
amazonBBCbreaking