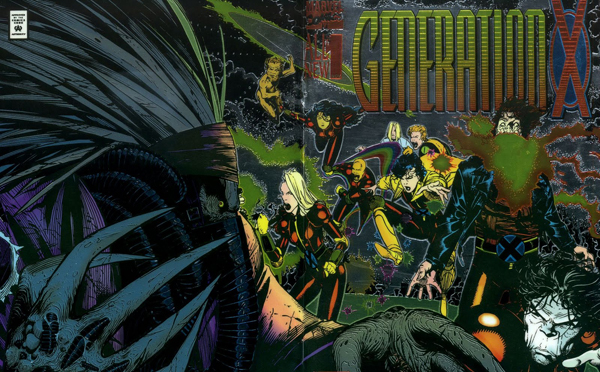 Whilst the 90’s in comics may generally be a time looked upon unfavourably, one of the things of note to appear in the mid-nineties was “Generation X”.

Spun out from the “Phalanx Covenant” event Generation X ,created by writer Scott Lobdell and artist Chris Bachalo ,was based around a new team of mutants brought together in the events of the Phalanx Covenant story. Unlike the New Mutants though, this team wasn’t mentored by Professor X or based in New York State. Their mentors were Sean Cassidy, aka Banshee, and reformed villain Emma Frost and their school was in Massachusetts . 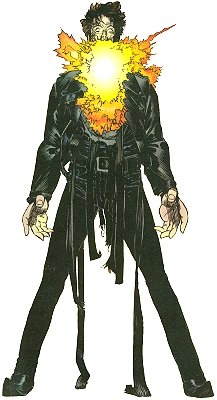 Generation X was one of Marvel’s most popular 90’s titles even inspiring a TV Film based on the comic.

One of the appeals of Generation X was as well as having more well known characters like Jubilee, Emma Frost and Sean Cassidy it also featured new characters and they were rather unlike anyone previously seen in an X title.

The team was made up of several characters,

Paige Guthrie aka Husk: the younger sister of New Mutant Cannonball hailed from Kentucky and could shed her skin, revealing a new body with a different composition beneath.

Angelo Espinosa aka Skin: a former gang member from the barrio in South Central L.A, he had the power to manipulate and stretch his skin.

M aka Monet St Croix: had the powers of flight, enhanced strength and also telepathy but was prone to going into fugue state like trances. From a wealthy family in Monaco this, along with her beauty, intelligence and assortment of powers gave her an elitist attitude and she looked down on her fellow students.

Synch aka Everett Thomas: hailing from St. Louis, Missouri, Synch had the ability to project an aura enabling him to imitate the powers of other mutants within a certain distance.

Some of the most interesting characters were Chamber and Penance. Chamber aka Jonothan Starsmore ,a British mutant, could project 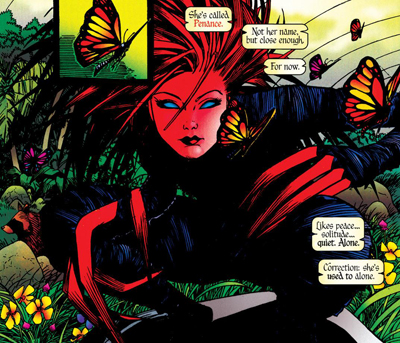 powerful blasts of energy. The cost of his powers was high though, when they first manifested he lost the lower half of his face and his chest cavity became a broiling furnace of energy. No longer able to speak he relies on telepathy to communicate. Chamber is distant, sullen and often bitter about the cost his powers have wrought on his appearance and views himself as a freak. Penance was a mysterious mute child like mutant with red skin hard as diamond and razor sharp elongated claws.

As well as it’s line up though what really made Generation X so good was Scott Lobdell’s writing, the spiky dialogue between the teenage team members wasn’t cliched or contrived but more realistic. Whilst the students would band together when they needed to, they were prone to snarking and bitching at each other, the argumentsoften derived from their different backgrounds. M viewed Jubilee as immature and thought herself better than her fellow students, Chamber was a loner, Skin had a problem with authority and Penance was a mystery. These characters would be fleshed out as the narrative unfolded.

Cassidy and Frost, despite being the adults, were just as bad as their students, often disagreeing and undermining each other in the field and on the campus.

Generation X was more about the characters relationships with each other than fighting supervillains.

Lobdell’s writing was aided by Bachalo’s detailed art with inks from Mark Buckingham amongst other artists.

The title also featured appearances from other characters like the mysterious aborigine Gateway, M’s mentor, and occasionally other various X-Men characters. 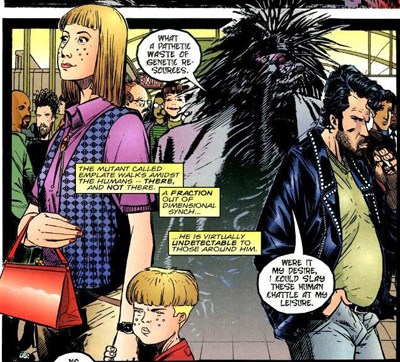 The opening 3 issues of Generation X encapsulated everything that was great about the title. After introducing the various characters as they go about their day with some wryly humorous dialogue the students end up intervening in a packed airport terminal after Chamber, deciding to accept the school’s invitation, is targeted by the nightmarish vicious parasitic mutant Emplate. It’s revealed in the ensuing fight that M knows Emplate somehow. After successfully making Emplate retreat after a pitched fight with Chamber’s help, the students, along with Chamber, return to the school only to find that Penance has mysteriously appeared on the school grounds in a comatose state.

It’s revealed that Penance was the captive of Emplate for an undisclosed amount of time and despite waking in the schools medical bay she makes a break for freedom, destroying the medical bay in the process. The students, along with Frost and Cassidy, set out to find Penance on the expansive school grounds in the midst of a storm only for all of them to be evaded or injured by the deadly, frightened former captive. Attempts by Frost to read her thoughts result in a case of psionic backlash. It’s Chamber, the self styled loner who knows all too well about feeling like an outsider, that finally convinces the deadly mutant that they are friends and mean her no harm.

As well as the action though there’s plenty of character work like Skin and Husk playing Scrabble and getting to know more about each other in the process and various other character moments.

The connection between Emplate, one of the most disturbing characters to appear in any X title, Penance and M would become a long running background arc but one which ultimately would not come to a satisfying fruition with Lobell leaving the title after 28 issues and Bachalo following not long after. Despite continuing several more years Generation X started to lose its popularity with a variety of writers brought in to try and buoy up the title to no avail. 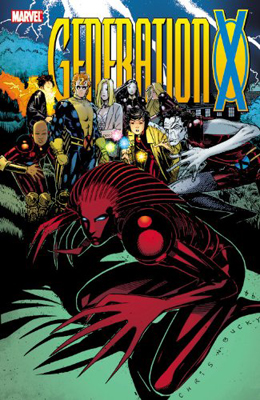 Despite Generation X’s popularity aside from a hodge podge of issues (Generation X Classic Volumes 1 & 2 issues 1 – 11 and Counter X: Generation X – Four Days issues 71 -75) it has yet to be collected and reprinted by Marvel which is rather criminal really as the first 30 or so issues are some of the best Marvel comics of the 90’s.

Andy Haigh started writing to counteract the brain atrophying effects of Retail Hell, now it's an addiction. Andy is an unrepentant sequential art absorbist and comics are one of his passions. Other interests include Film, Music, Science Fiction and Horror novels and quality TV like Game of Thrones. He can talk about these at great length if only someone would listen. He lives a somewhat hermit like life in The Shire, spends too much time on social media and is still waiting to go on an adventure.
More Goodness
comicsMarvel