Professor of Literature Sela Mathers uses her book of fairy tales to help others with decisions often with undesirable consequences.

Zenescopes Grimm Fairy Tales has been a cult favourite since first appearing in 2005, taking in classic fairy tales and giving them an often disturbing or horrific modern twist and has also lead to numerous spin off titles. This new ominbus collects together the first 50 issues of the series in one rather hefty tome.

Most issues feature a framing story with Sela, with a fairy tale relating to the events of the framing story making up the majority of the narrative. These vary in length with some being single issue stories like ‘Red Riding Hood’ which features a put up on college girl being pressurised into sex by her arrogant boyfriend before losing herself in the book of fairy tales in her room and seeing herself as the titular girl of the tale before coming to a decision regarding her current situation.

Other stories have more than one part like ‘Beauty and the Beast’ which features a girl trying to escape an abusive relationship and Sela helping her with the book. 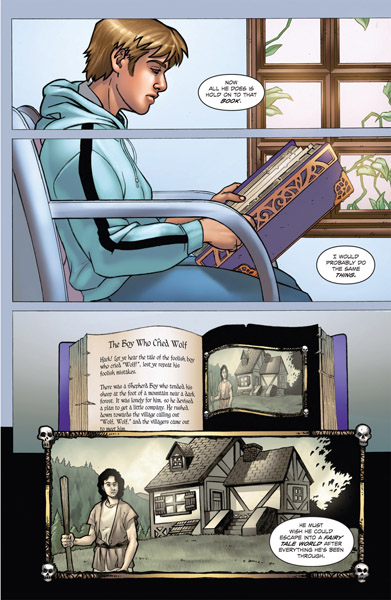 The boy who cried wolf.

Putting an alternate spin on classic fairy tales whilst not being that original does provide a pretty big sandpit for the writers to play in, some of these re-interpretations are pretty disturbing and blackly comical too. You’ll never look at ‘Jack and the beanstalk’ or ‘Goldilocks and the Three Bears’ the same way after reading it here.

Sela’s contempt for people who seem incapable of helping themselves despite her best efforts becomes a part of the driving narrative underlying the series as it goes forward and some stories feature Sela outright punishing people like in ‘The Three Little Pigs’. Later the framing story takes on a larger part as Sela visits the land of fairytales and learns more about the power she holds.

However creator/writers Ralph Tedesco and Joe Tyler, amongst others writing, is inconsistent due to the series inherent ‘anthology’ approach and this inconsistency on a written level is equaled with some distinctly hit and miss art. 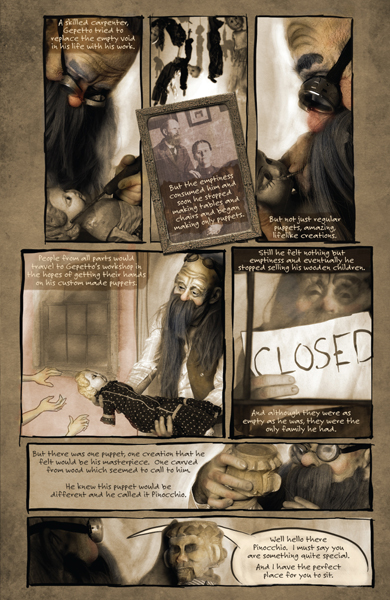 Not having a regular series artist isn’t necessarily a bad thing, the different art styles actually suits the anthology approach. However presumably due to the indie nature of the title, for every good example like Eric J and Nei Ruffino’s work on ‘The Sorcerer’s Apprentice’ there’s something truly diabolical like Claudio Sepulveda’s work on ‘Myst’.

Although there are standouts like the tale of Pinocchio which features some impressive Dave McKean-esque art from David Seiman for the fairy tale part of the story contrasting with the art of Dave Hoover on the framing story of Jacob, it’s the high point of this collection.

One of the more bizarre features or omissions to be more accurate here is unlike other omnibus collections this doesn’t feature any of the cover art for the issues contained within. Grimm Fairy Tales is probably more known for its often impressive pin up style cover art involving elements of fairy tale imagery, which often differ from the characters appearances in the story. So to omit these entirely from this omnibus is an odd move which probably won’t go down well with fans  .

Andy Haigh started writing to counteract the brain atrophying effects of Retail Hell, now it's an addiction. Andy is an unrepentant sequential art absorbist and comics are one of his passions. Other interests include Film, Music, Science Fiction and Horror novels and quality TV like Game of Thrones. He can talk about these at great length if only someone would listen. He lives a somewhat hermit like life in The Shire, spends too much time on social media and is still waiting to go on an adventure.
More Goodness
breakingcomics