Back in 2007 I attended my first Comic Book Convention in Ireland. It was a rather underwhelming experience truth be told. I spent the greater part of the day trying the find the venue on the rain and windswept shores of Dublin Bay. After what seemed like an eternity I walked in to the modest function room of a three star hotel. The room was buzzing; there were a few merch stalls and plenty of comics. The event felt well attended but that was probably due to the lack of space. None the less, the nerdy faithful had turned up to see the guest of honour, none other than famed comic book writer Mark Millar.

That was nearly ten years ago. Now in 2016 the convention scene has really taken off. Large conference spaces spanning several floors have now replaced the cramped back rooms of hotels. People of all ages are wearing their fandoms not only on their t-shirts but embodying their favourite movie and comic book characters through cosplay; the word hadn’t even entered the mainstream vernacular back in ’07.

Riding on the crest of the wave of this tide of popular culture is the emergence of the comic book scene at home. Across the island, north and south, artists and writers are collaborating, creating and promoting their work via the internet and conventions. In this first part I took time to talk to some of the home grown heroes of the Irish Comic book scene at MCM in Lisburn.

Aidan Courtney and Mike Lynch are both comic book writers who work in the medium of the Irish Language. 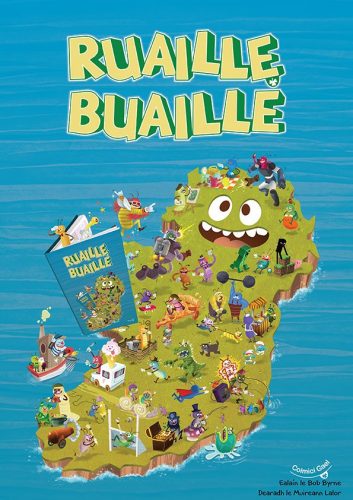 AC: I am the publisher and founder of Coimicí Gael which makes Irish Language Comics. It’s just basically to make the Irish language a bit of fun, a bit of craic for people. When I started out doing this I used to read French and Dutch comics and a friend of mine give me some great Dutch comics from time to time. I have remedial Dutch so I figured if I can laugh at something in Dutch I’m learning it. So we decided to put our heads together and do the comics in Irish. We’ve got a variety of comic book writers and artists who are working in different fields. We’ve got Mike Lynch who writes for us too..

ML: I write for Abandon Comics, I do sort of horror comics for kids and teens; I do stuff for younger kids as well…done a lot of work for small press companies in England and the 2000AD fanzine.

GP: What’s the reception been like for these comics at home?

AC: The idea came to me in college, I was at Limerick School of Art and Design and I used to go home and watch SpongeBob Square Pants in Irish. I’ve always had a interest in the Irish language and I speak a bit myself. I figured I wanted to read more comics as gaeilge and there was nothing available at the time but then a publisher starting doing graphic novels of myths and legends in Irish and I started working for the Irish language paper La, doing Irish language panel cartoons. I spent time in Canada reading French comics and got influences there. All the people I collaborate with we work either professionally or semi-professionally making cartoons on this Island. 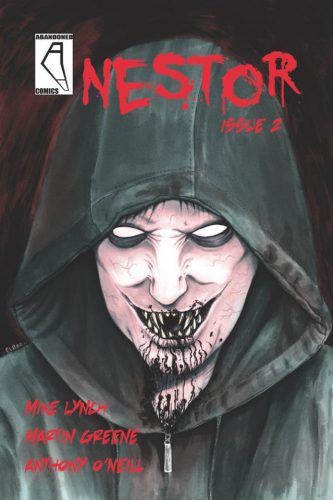 GP: What’s the reception been like? Do you base your scenarios in Ireland?

ML: It’s been great. It’s a real mix of styles and formats. And yeah we tend to set them here. This particular work is set in Dublin, it’s a vampire story set in Dublin. We find our readers like to keep things local as they can relate to them a bit better. It’s great to see where you’re from in a comic because you can relate more to it than say somewhere off in space or wherever.

GP: How is the state of the Irish comic scene today?

ML: It’s getting bigger all the time and these shows weren’t happening at all now there’s a few now each year. Now it’s a regular occurrence and its great to see, its great for our industry.

Richard Davidson is the co-founder of Back Pocket Comics based in Northern Ireland one of the many growing self-published comics coming out of the province.

GP: What’s it all about?

RD: We want to create comics that everyone can enjoy for a back pocket price. Something that’s very affordable with good quality art and stores. I’m a writer myself both me and the other founder, we find artists to create our comics on the internet to do our artwork with us.

GP: Tell us more about that process from getting your work from the page to the artist canvas board? How does that work?

RD: We tend to give our artists their own creative development on it. We’ll have our basic outline, we’ll break it down into pages for them and say “here you go, if you want to tweak it let us know and we’ll give it a shot.” If we have a very specific idea what we want on a page we will detail it to them and they’ll try to match that detail as much as possible. The majority of the time we’re happy for the artists to create their own signature style on it as well.

GP: What are your comics about?

RD: This one here is called The VIM Initiative which I have written myself. It’s sort of our take on the generic Superhero. I use that word generic because superheroes have been done a lot, so I want to create your typical upbeat superhero; the only difference is I wanted to do a nonlinear story line. So instead of starting on day one and having an origin story I got to the good bit and started at day 45 and jumped back to day 35 and jump back to day 55 so we’re getting all the good bits in a shorter space of time. It’ll be a three issue miniseries. This next one here, Steven wrote Tarik which is a lot darker and grittier. Its about a wee kid who’s been taken away from his murdered family and taken to this kingdom. The leader of this kingdom takes a great shine to this boy and there’s a hidden mystery behind that.

Our first collaboration is The League of Mundo. It’s a cross between Assassins Creed and some Manga influences in there as well. It’s going to be a 250 page volume which should establish that universe. 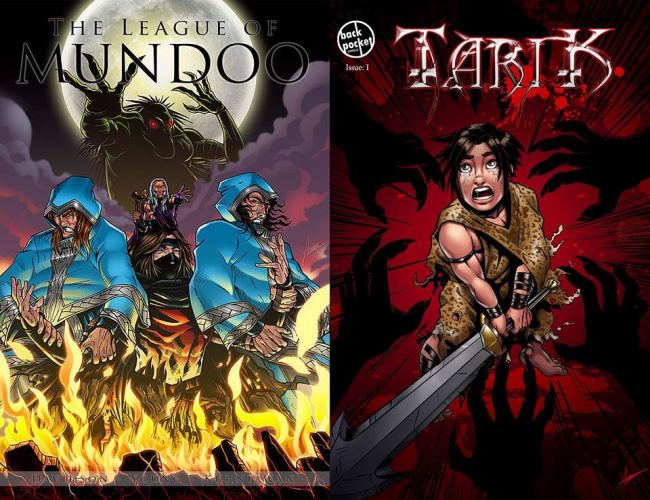 GP: You’re based in Northern Ireland, is there a burgeoning comic book scene here in the province?

RD: I think so, its small but its growing. You’ve got the Comic Book Guys based in Belfast who have just launched their own comic; they’re definitely ones to be carrying the flag for the independents. It’s small but growing and hopefully with the like of Comic Cons it’ll help us showcase our art.

GP: Do you ever set your comics close to home or is it pure escapism?

RD: Yeah I’ll leave that up to the other people. I’ve seen home growth of stuff using subjects like the Troubles and Belfast; I’ll let others deal with that. I want to write what I want. This is our first comic con selling and I’m pleased at the reception we’re off to Dublin soon and we’re going to be coming back next summer with more stuff hopefully.

John McCray is a bit of a local legend. His list of contributions and collaborations reads like a fanboys who’s who. Marvel, DC, Dark Horse, Spiderman, Batman, Superman, The Hulk, Star Wars, Simpsons, Scooby Doo, and Judge Dredd are but some of the amazing works that he has drawn for. You’ve probably read his work without knowing it. And he’s a local lad through and through. 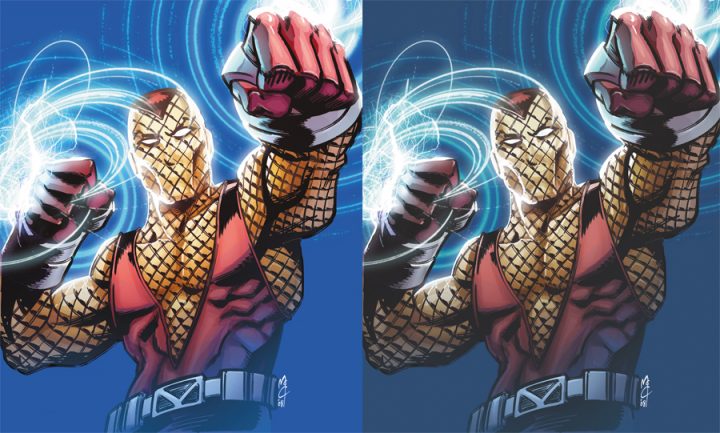 GP: How did you get into comic book artistry?

JM: My mum and dad bought me a comic when I was about 4 years old, The Avengers No 8, and that was it, I was going to draw comics when I grew up. When I got to about 18 I realised I had to be serious about I, I was always drawing comics but I started drawing sample pages, drawing out pages from the comics and sending them in to the companies. If you look at the inside of any comic its got the address of the publishing company. I would just post off my artwork to them, photocopies, did that for four years until someone gave me a job. Simple as that!

GP: And you’re from Belfast is that right?

GP: And were you aware growing up of any local based comic book artists from the local region.

JM: There was a guy, (is a guy) called Will Simpson, who worked for 2000AD, he came before me, he now storyboards game of thrones now. I would go out to his home in Larne and help him out with his drawings. He was the first guy and I was wanting to learn off him, great talent.

GP: What does it feel when you begin to ink your favourite heroes, especially the ones you’ve grown up with?

JM: It’s both scary and exhilarating. It’s fantastic to sit down and draw Spiderman after you’ve been reading Spiderman stories all your life and you get to put your mark on the series and do your little bit. I’m never going to be one of the greats but I have been published for Marvel and it’s a great feeling. 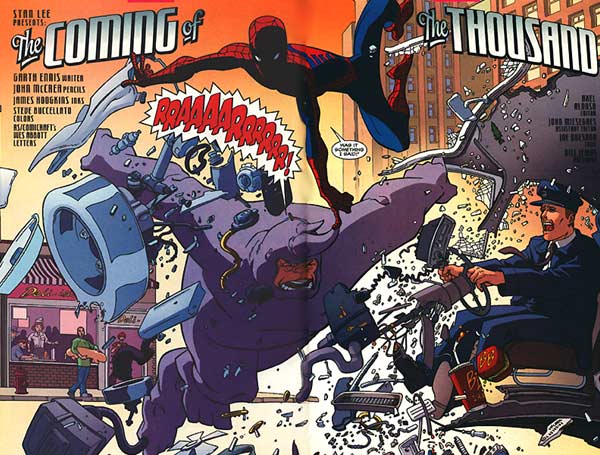 GP: Have you worked on your own original martial?

JM: Yeah I do a book called Mythic which is published by Image at the moment and its my own creative collaboration with a guy called Phil Nestor who writes it. Its premise is that science is a lie and myths and legends exist and made the world go round. There’s all these different fusions of cultures and there’s this team of trouble-shooters that come and fix it when it breaks and keep the world from knowing that’s how the world works.

Both the north and the south, there’s a whole lot of good talent coming up and the internet makes it easier. When I was breaking into comics there was no internet and it was all done by mail and post and FedEx. Now with the internet you can be chatting with your editor in real time and you can send your artwork and they can answer you within seconds whether the page is good. You can fix and veto the colouring too. Makes the whole process a hell of a lot easier. A lot of comic book artists are obsessive compulsives and so they can get to control every stage of the journey so it makes the job twice as long and hard in a way because you are tinkering away with everything but at the same time you get a better product at the end of it.

Stay tuned for Part 2 where I interview comic book writers at the Dublin Comic Con!

Mark lives in Belfast where he runs a ukulele club, plays board games and watches old TV shows. His interests include Cold War architecture, trawling for vintage toys on eBay and reading Starship schematics on Memory Alpha. He was a finalist on the UK version of King of the Nerds.
More Goodness
2000 ADartBatman