The art, the writing and the sheer sense of anticipation is almost overwhelming.

It's the nature of the beast but it's still a shame that the story has to be sliced up for publication.

Another year and the beginning of another Marvel Event, but this time we’re promised more than the traditional cross-over punch-up. Infinity#1 represents the culmination of writer Jonathan Hickman’s work at Marvel since the NOW! initiative began back in October last year and continues plotlines that have germinated in his comics as well as elsewhere throughout the modern Marvel universe. In this issue, the first of six, we are reintroduced to a whole host of new concepts and characters that need a fair bit of background reading to get up to speed. If you’re not entirely au fait with his work on Avengers and New Avengers then things such as the Builders (an ancient alien race of evolutionary perfectionists), the incursions of other-dimensional Earths into our reality (and the Illuminati’s attempts to stop them) and new additions to the Avengers rosta, Ex Nihilo and his sister Abyss, for whom there is not room in this review or words in my brain to explain, might see you playing catch up. Elsewhere we are treated to the reappearance of some older Marvel properties like the unfathomable Captain Universe, Squadron Supreme refugee Hyperion, and characters powered by the White Event from New Universal, properties that haven’t seen much wear in recent years but are more than welcome strings to Hickman’s epic bow. And if that all seems a bit much then know that I have only scratched the surface of the story that Hickman is trying to tell. 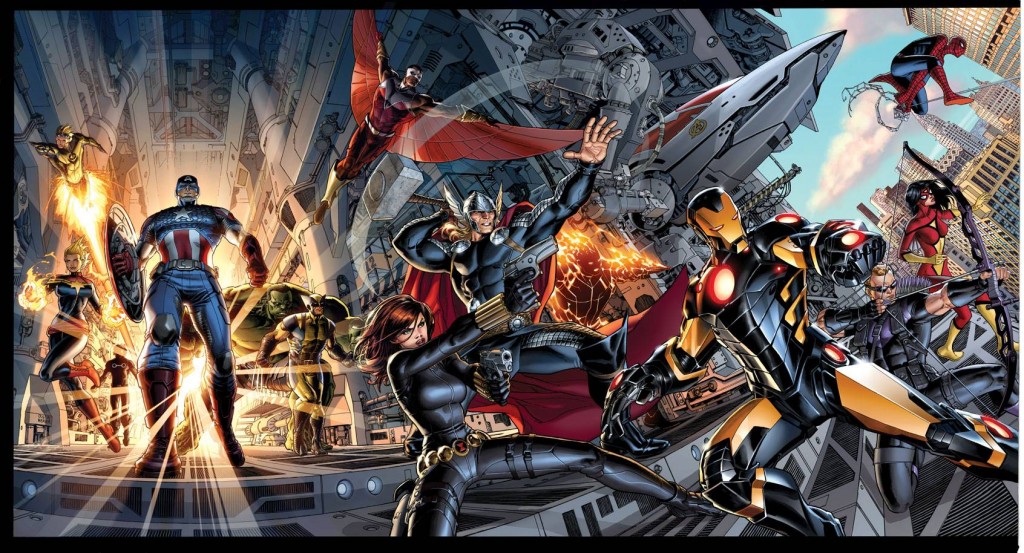 Time to update your definition of “epic”

There is an elegance to Hickman’s work that, in his creator-owned material, can come across as over-stylised but, with a Marvel artist keeping him grounded, is nothing short of magnificent. In Infinity #1, as usual, Hickman is taking you down multiple paths at once, teasing you with glimpses of larger mysteries, goading you to keep up with him as he runs one stride faster than you can follow. New ideas are built upon old ones like cities rising throughout time, futuristic architecture melding with the modern and here and there a familiar arch or buttress, a nod to that which went before.

All of this is perfectly complemented by Jim Cheung’s artwork, depicting the busy hubbub of a SHIELD Helicarrier or the grand desolation of a mad Titan’s asteroid -throneroom with equal aplomb. Due to this issue and his work on New Avengers: Illuminati and Avengers: The Childrens Crusade, Cheung is fast becoming my second favourite artist (sorry Jim, Frank Quitely will always rule the roost in this poor fanboy’s heart) – I’m particularly a fan of the way he imbues his non-combatant characters with a gentle, very human innocence; something that causes the heart strings to be plucked all the harder when they’re smooshed into a fine paste.

From the first page, Infinity #1 is not a comic for the casual reader and, really the only criticism I can lay at the creators’ door, the experience of reading it is akin to watching the first ten minutes of Star Wars or The Ring Of The Nibelung and then waiting a week for the next ten minutes – you know that the finished article will be mind-blowing but the wait in between is an exercise in utter frustration. Fill the gap with some more of Jonathan’s Marvel work – you can’t go wrong.

BONUS! If Marvel’s Infinite Comics doo-dah is your bag, check out the Silver Surfer  flavoured extra entitled “Against The Tide” for all the dead Skrulls you can eat.

Pics from comicvine and craveonline

Trapped in the past, Ben Fee finds himself leaping from life to life, putting things right that once went wrong, and hoping each time that his next leap will be the leap home..........
More Goodness
ben feecomiccomics