previous
Knight and Dragon - Be ready for it!
random
next
Clockwork Watch
Books and Comics
0 likes

Well written with an interesting premise.

Lacks some of the punch that may be expected.

Magic Of Myths is a good comic but not overly my thing sadly, seeming to be aimed at a younger audience. I say this because, although the story has a certain weight to it, I found it somewhat simplistic and it often felt like it was too light for the potential heaviness contained in the themes and general narrative. Simply put, Magic Of Myths is the story of a war between the Greek and Roman gods that has boiled down to each side having to find and train a champion to fight the deciding battle; pretty intense stuff then, and interesting too, what with the conflation of Greek and Roman mythology.

It gets more interesting when considering the blending of myth, fairy tale and folklore that occurs throughout the story with characters popping up from all sorts of classic stories. It’s full of cool references that have enough broad appeal that anyone can enjoy them but are also select enough that anyone with a more specific knowledge of myth and folklore will be able to appreciate the fan service going into the development of the story and the presence of these characters and creatures. 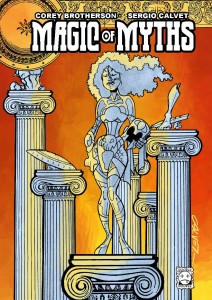 Champion Of The Comic, Eve

So, all for the good right? Cool references, a premise of epic proportions and well written narrative with some interesting characters woven into it. It genuinely does seem like a very good offer. However, my main issues are twofold. The first is objective and it’s that, as I said earlier with the lightness of the story, the full potential just isn’t reached. We’re talking a battle of epic proportions, a war between the most awesome gods out there, biblical level chaos and yet, in putting this into a mere 100 pages (roughly), I ended the book feeling that it was too short, that the characters didn’t reach the level of development I would have liked.

Admittedly the series isn’t yet finished and we are currently waiting on Season 3 of Magic Of Myths but I just felt a bit flat after finishing. I didn’t feel like I’d particularly gained anything from the comic and I never felt truly engaged, though I certainly didn’t dislike it, it was always present in my mind that it was being read as part of a review.

Part of this was the age orientation of the book. Though I’m not entirely sure if it would be something I’d give to a child, stylistically it felt to me that it had a certain young appeal. There is somewhat of a tendency for the book to overstate its messages that, to me, felt blunt. However, the real problem was the second real issue I had with Magic Of Myths.

Now, I’ve got to say that this is purely a personal preference. This is very much a subjective criticism as it concerns the artwork. It just doesn’t work for me. It’s cartoony and the bubblegum style feels more suited to Cartoon Network than anything else to my eyes. It lacks the visceral quality I look for, particularly in combat driven sequences. That said though, I must stress that this is very much just my artistic preferences coming to the fore. Calvet’s art is well drawn and thought out, as is Brotherson’s writing. The problem was that neither of their styles really worked for me. From an objective perspective I can commend them on their work but, personally, I just could not enjoy it. I would say that Magic Of Myths is, overall, a comic well worth a look. However, I wouldn’t advise you to run screaming out of the house to get it right this very second. 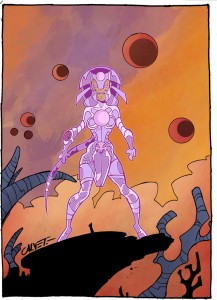