I have the feeling it will be a long wait for issue 2. And it also ends too soon. I really wanted more. 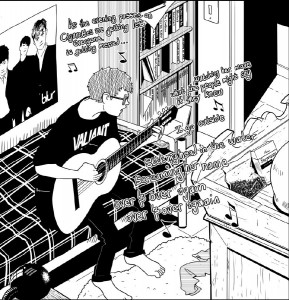 I’ve already mentioned that Willem Samuel has brought to life his experiences growing up in South Africa, using his skill as an artist to put into images and words how the world was slowly changing around him. I was fortunate enough to receive an advance copy of the comic that will hit the shelves in February, 2014 and I have to say I was quite impressed.

The first part of six to be released deals with his experiences a seventh grader and what I found quite interesting is that while he’s a grown man at this time he doesn’t embellish his experience. It might be a story that deals with the changes that had occurred in South Africa and its effects, but very few kids of 13-14 are concerned with politics, economy or the social moves that affect the world surrounding them. Samuel captures perfectly that sort of rash innocence that allows for kids to live in a world to which they are very little attuned with, outside their immediate existence. He presents us with a realistic teenager, whose biggest concerns are pimples, popularity, girls and whose biggest problems come from being caught smoking in his room.

It is hilariously portrayed, even though I imagine it would seem not quite as funny for anyone living through the events. His inner thoughts create an entirely different world, one we’re privy too, but one that everyone else can’t see, a world where Judge Dredd can come and give him a ride to school, one where he can change what’s been said and done, cleaning up the messes he’s created, whether by accident or by design.

The main character is essentially a dreamer, a boy that wants something that he can’t have anywhere else outside of his head and it’s why the comic works so well, because, aside from portraying a world that’s so little known for the vast majority of the people living outside it, it also deals with certain issues that we’ve all bumped into at least once in our lives: having a bad day from start to finish, getting in trouble and feeling wronged – the list can go on.

All in all, I can’t say anything other than you should get it, read it and anxiously wait for the second part, which will lead us to an entirely different stage of the character’s life. Oh and did I mention the art looks amazing? No? I probably should’ve started with that.

*Many thanks to Nora Golberg from Soaring Penguin Press for pointing us towards this brand new comic.

What's there to say about me? I love the sci-fi and fantasy genre when I read, but I am in no way limited to that alone. I do think Frank Herbert deserves a statue for his writing(if there is one, point me in that direction, please). I enjoy writing quite a lot, but I am also kinda lazy. If you want to make me happy give me books or Doctor Who collectibles. Or a real TARDIS, in which case I will love you forever.
More Goodness
breakingcomic bookmengelmoes