Lorenzana and Gamboa's art is impressive and intricately detailed.
Gloriously over the top in its Grindhouse exploitation aesthetic.

Bad taste, nudity, profanity, gore, body horror, this is definitely not for everyone.

Nancy Simmons found herself in Hell after being murdered by man-turned-demon Mr Macabre. Macabre had an insidious plan: he picked Nancy due to knowing she would have a strong enough spirit to resist Hell’s minions. Not wanting to “spend an eternity in a heavy metal video” she fought her way out after gaining the assistance of another who was growing tired of Hell- Lucifer, who fell in love with Nancy in another part of Macabre’s plan. Together they escaped through the gates of Hell back to the mortal realm. The only problem is the gates are still open and now the demonic denizens of Hell are surging forth into the mortal realm… and they’re hungry. 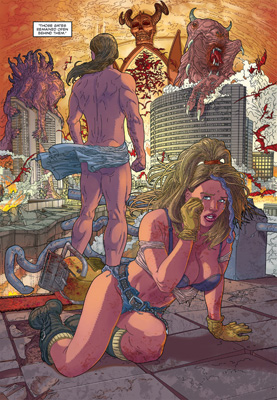 Nancy and Lucifer look on at the carnage they’ve unleashed.

This is a gloriously over-the-top gem; a grindhouse exploitation film in comic form. Nancy Simmons is a bad girl with a capital B, a trailer trash blonde with boots, cutoff denim Daisy Duke shorts, a ripped skimpy T-shirt and a bad attitude- and after fighting her way through Hell she’s also pretty handy with a chainsaw.

The first thing you notice is that the art (by Enrique Lopez Lorenzana with colours by Fran Gamboa) is stunningly defined and detailed. The opening panels show Mr Macabre journeying to Cocytus through a set of huge doors, housed between the spread legs of a vast statue of a daemoness, showing both stunning detail and the delightfully bad taste that sets the tone for the whole affair.

Before long, Lucifer is being seduced by Nancy -who is more interested in the pleasures of the flesh than dealing with the apocalypse that’s unfolding- only for the real Nancy to show up and promptly hack her head off, and berate the demoness imposter for not having a tight enough ass. Elsewhere a bible-quoting, shotgun-toting police officer named Irvin (think Fred Williamson) is saving the innocent from rapacious demons which are running rampant in the city.

That’s just the opening act; as the story progresses, huge demons start attacking the city Pacific Rim style, the army gets involved, and Nancy, Lucifer, Irvin and other survivors take refuge in a prison before a horde of Angels descends with their own agenda.

Torres throws in some neat touches, like a Satanist who is disgusted with how pathetic Lucifer seems after dedicating his life to worshipping him, and Sandalphon of the Heavenly host, who sees humanity as nothing more than worthless cursed monkeys scrambling 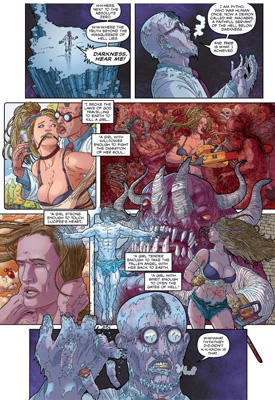 Mr Macabre speaks to his superiors.

Angels who are just as bad as demons isn’t exactly a new development by any means, but Sandalphon’s disgust with humanity (“the monkeys… they are wicked”) adds to the End of Days tone of the story, and her reaction to Nancy making her touch the floor (“You defiled with me this dirty soil”) results in one of the most twisted images in the book.

Saying this isn’t for everyone is a bit redundant- just looking at the cover (one of several playing on the grindhouse film aesthetic) will make it pretty clear whether this is for you. Torres, Lorenzana and Gamboa don’t do anything by half measures: profanity, nudity and blood soaked gory violence are splattered all over.

There are nods aplenty to the B-movies and grindhouse films that clearly inspired Torres, with likenesses of Quentin Tarantino, Danny Trejo and Tom Savini featuring, and plenty of body horror in the vein of The Thing.

For anyone wanting a gloriously bad taste grindhouse experience in comic form this is great stuff.

Andy Haigh started writing to counteract the brain atrophying effects of Retail Hell, now it's an addiction. Andy is an unrepentant sequential art absorbist and comics are one of his passions. Other interests include Film, Music, Science Fiction and Horror novels and quality TV like Game of Thrones. He can talk about these at great length if only someone would listen. He lives a somewhat hermit like life in The Shire, spends too much time on social media and is still waiting to go on an adventure.
More Goodness
breakingcomicsEl Torres