previous
Birmingham Comic Con is back
random
next
Geek Pride speaks to author A. S. Chambers
Books and Comics
1 like

by Laura Benson on 11/05/2019
Details
PublishersComicsTitan
By

The terrible art and story.

Worth avoiding for fans of the show 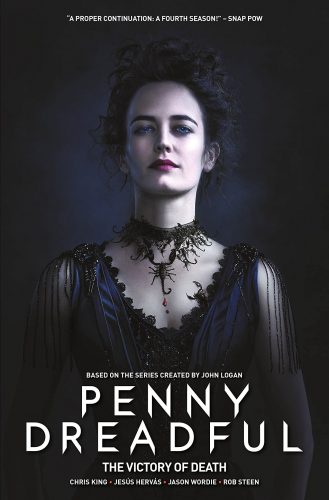 There are often conflicting feelings when a much-loved TV show like Penny Dreadful carries its stories into the comic medium. On one hand, there is excitement over continuing the stories of our favourite characters! On the other, there is the worry that the stories won’t live up to the plans the show had for future seasons or the level of story writing.

When I was given the chance to review Penny Dreadful ‘The Victory of Death (issues 9-12 of the ongoing series), I leaned more towards hopeful optimism. A series as dark and horrific and also
based off the very idea of short stories, the show had, to me, found the perfect home in comics.

The series is described as:

“Penny Dreadful: The Awakening, a sequel series exploring the aftermath of the events which transpired in the dramatic final episode. Here, six months have passed and Ethan Chandler is plagued by the death of his lover, Vanessa, whom he murdered per her request for the greater good. Feeling lost, devoid of purpose and unable to move on, little does he know that his doom and gloom will soon be exacerbated when a new threat arrives in London with destruction on its mind. Elsewhere, in Egypt, Mr Lyle and the Duke of Kent discover a sarcophagus whilst rummaging through a tomb boasting hieroglyphics which warn of disaster. Nothing good ever comes from meddling with the dead in these scenarios, but in this case, the consequences could bring about the end of days. Written by series producer Chris King with illustrations by Jesus Hervas, The Awaking is already shaping up to be a successor on par with Showtime’s cult phenomenon.” (sic) 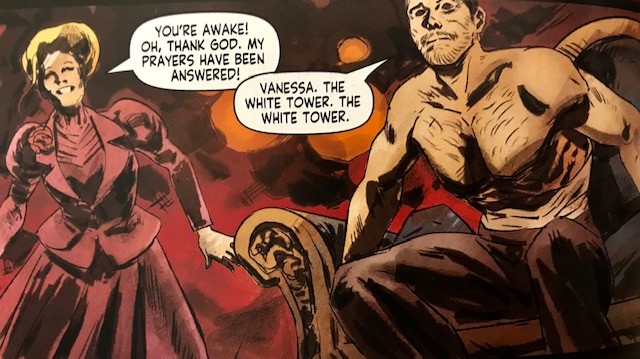 For me, the most disappointing aspect of this comic is the art. The show was a deeply detailed and elegant affair, with scenes straight out of the most horrific paintings. Quite frankly the art in this comic does not do that justice.

Only when characters face is mostly straight on and up close is there any detail, often the character is left looking vague like an unfinished outline. There is so much colour splashed around the pages that it becomes hard to figure out what is happening.

It is a shame we are not treated to the art of Tess Fowler shown on the back cover of this volume. It is crisp, detailed and quite true to the actor’s faces in the show. Sadly the style of Jesús Hervás in the (main comic is so stylised that is can be hard to tell who is who, especially if it’s been some time since you last finished the show.

The storyline would be a lot more engaging if the comic didn’t flip between subplots so often, often devoting just 2 pages to a story before moving to a different part of the story all together with no sense of rhythm. I confess at first wondered if the volume I was reading had been bound out of order, for all the sense it was making.

The characters are very different to the show and I can’t say in a good way. The most jarring of all is Lily Frankenstein’s transformation from an angry, vengeful powerful woman into a god fearing, hand wringing, pushed around by men doormat. To see one of the series most interesting characters dumbed down like this hurts greatly.

In fact, none of the characters seems to share the personality of their onscreen originals. It’s pretty disheartening. 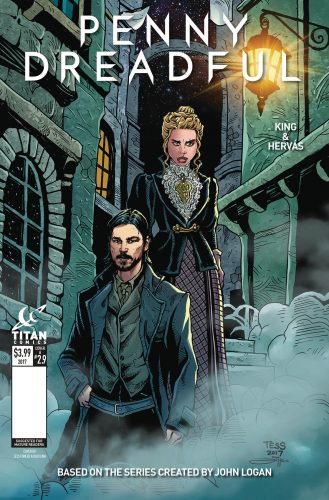 I wanted to love this series, then as I started to read I tried to like it, and towards the end, I could just barely tolerate it. This series sadly does not do justice to the shows aesthetics nor its stories. Fans of the show can easily give this one a miss.

Thankfully for fans, the show is coming back!

As seen on the official Penny dreadful Twitter account;
“Sometimes what’s dead doesn’t always remain. #PennyDreadful returns to @Showtime with Penny Dreadful: City of Angels. Set in 1938 Los Angeles, this next chapter will explore a mix of the supernatural within a genuine historical backdrop infused with Mexican-American folklore. ”