Once upon a time there was a popular chap-hop artist named Professor Elemental. The Prof expressed an interest in comics on his Twitter page, and an idea was born in the mind of young Christopher Mole, writer. After a brief exchange between the two it was agreed that Chris should go forth and find talented writers and artists to assist in the glorious feat of documenting the shenanigans of Professor Elemental in comic form. And so it was done. 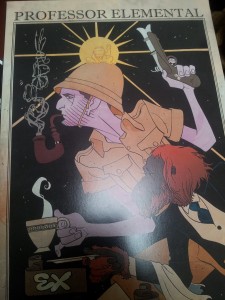 Since then the Prof has had two comics based on his exciting adventures released, and they aren’t stopping there! I was lucky enough to meet the writer/editor Chris at MCM Expo Manchester in July, and picked up issues 1 & 2 of the comic. 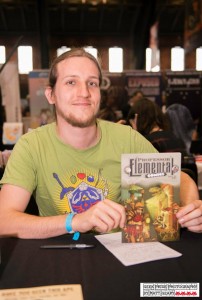 This biographical epic begins with the Prof’s “Quest to the Congo” where he meets his soon-to-be long suffering monkey butler Geoffrey who is too frustrated with trying to clean up after the local Gorillas who insist upon pooping right where he’s just cleaned up! After a short spell his new monkey butler learns to make the perfect cup of tea, and is forever endeared to our exuberant Professor’s heart. 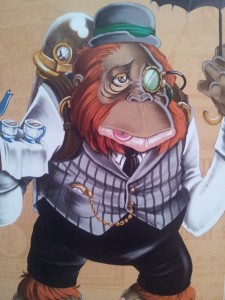 Every story is illustrated in a different style by a different artist, which really adds to the charm, and they are chock-full of gentlemanly exclamations such as “Indubitably! And bring me my horticultutal trousers!”. The rest of issue 1 sees Professor Elemental fighting with killer plants during an ill-planned scheme to win the interest of the beautiful Sadie, and dining with the inhabitants of Wonderland whilst trying to find the Mystic Golden Frog. All in all this 1st issue has set the comics in good stead for the future. 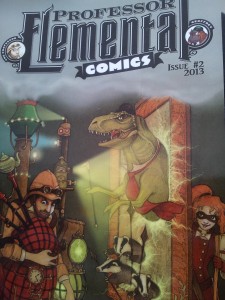 Issue 2, in contrast to the first, has been printed in the English size which is much more enjoyable to read from in my humble opinion, plus it has a fricking T-Rex on the front, what’s not to love? There are a lot more stories this time round and while that does get a bit confusing at times (it’s hard to tell sometimes where one story ends and another begins, and “is that just a filler page or not?” crossed my mind at one point) they are no less entertaining than those from the 1st. The shenanigans continue with flying contraptions, ghosts and vigilantes, to mention but a few. It’s just a shame for the poor old Prof that nothing ever really seems to quite go his way. 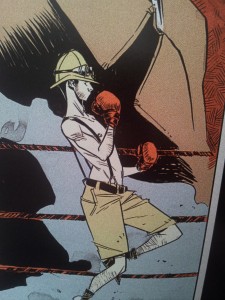 Throughout both books the artwork is incredible, the writing is impeccable and the escapades which span all over the globe, not to mention time and space, are gripping and I couldn’t put them down. Now… Where did I put my Earl Grey?