Relaunches Sonja as a bad ass heroine.
Impressive characterisation.
Geovani's art compliments the story.
Introduces one of the best villains since Kulan Gath.

If you have no interest in sword and sorcery then this won't appeal to you.

In this first issue of the relaunched Red Sonja, King Diamath has fought a bloody war and overthrown the Zamoran king only to make a strange discovery in the castle’s dungeon. On the Cimmerian Border Red Sonja finds herself the subject of a Royal Summons.

Dynamite have always been been somewhat looked down upon despite their excellent modern pulp titles like The Shadow and cult favourites like Warlord of Mars and Dejah Thoris amongst others. This looks set to change however with acclaimed writer Gail Simone taking on Red Sonja Dynamite’s most enduring title, on-going since 2005.

Red Sonja#1 is an impressive example of how to pull off a relaunch, it doesn’t really change that much it’s the execution here that is key.

This issue features several different covers from Amanda Conner, Fiona Staples, Colleen Doran, Nicola Scott and Jenny Frison amongst others. After Simone voiced an idea of getting the best women doing art in comics to provide covers, they were forming an orderly line.

The prologue featuring King Diamath and his clearly somewhat unhinged son Tiath, making their way through the aftermath of the bloody war with the Zamorans and investigating the dungeons, is an excellent and ominous start to the story. More than that though it establishes character traits which will become important later on in the story and this is just the first few pages. 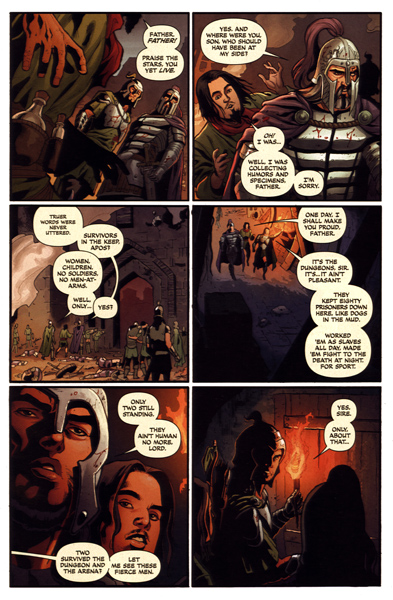 King Diamath and his men head for the dungeons.

A scene featuring a trio of thieves attempting to sneak up on Sonja sleeping by her camp fire is reminiscient of Dirty Harry’s infamous ‘Do you feel lucky punk’ as the still prone Sonja says ‘I keep a throwing dagger under my pillow always. Are you a gambler cutthroat?’

This in itself establishes a far more badass Sonja to what has been seen previously.

Red Sonja has always been a gender switch on Conan ever since the character first appeared in Marvel’s Conan in the early 70’s, a warrior woman capable of being Conan’s equal and that character was based on the character created by Robert E. Howard for the story ‘The Shadow of the Vulture ‘, although that story wasn’t set in the Hyborian age like Howard’s more well known work.

Other scenes reinforce this element of the character like Sonja having to wear a dress much to her dislike before seeing the King and learning the details of what has befallen the kingdom . This works on more than one front, it’s a nod to the way Sonja chooses to wear very little in the way of clothing or armour. Her ‘chainmail bikini’ has become a staple of fantasy in itself but also it works in the sense that a warrior whose survival is dependant on fluid movement and agility wouldn’t want to be wearing something restraining.

As well as establishing characters there’s also a refreshing humour present with a messenger/bodyguard referring to Sonja as ‘She of the impressive cleavage’. Humour is hard to pull off in a sword and sorcery setting without it spoiling the tone and seeming too tongue in cheek however this works well and is a nice nod to the notoriety of the chainmail bikini. 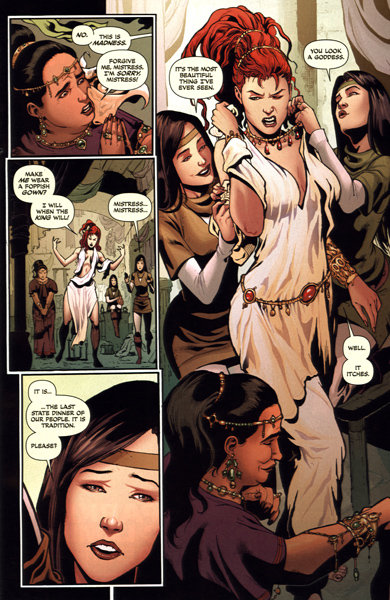 Whilst Simone’s writing is one part Red Sonja veteran Walter Geovani’s art brings the hyborian world to life with some impressive scenes. The opening page featuring King Diamath and the siege of the Zamoran castle is impressively busy and the different approach to panels with the more dialogue heavy scenes being more traditional square panels and the action oritented scenes being more random in their layout and shape is a nice touch which adds to the kinetic nature of the action.

Adriano Lucas’ colours also bring scenes to life, with the camp and dungeon scenes making good use of shadows and fire as a lightsource.

This issue features a lot of stuff happening but it never gets confused, it’s easy to follow events even though there numerous shifts in location and time which is a credit to Simone’s writing. Superfluous dialogue is a pethate but there’s none of that here, every line is shot through with purpose of

This issue also introduces a new villain, who is far more than just another warlord (which is one of the problems of the sword and sorcery setting) and the ending of this issue makes you want to pick up the next to see what happens, which is the best .

Red Sonja deserves to be in the ascendant with this relaunch, Sonja has never been more of a bad ass heroine.

Andy Haigh started writing to counteract the brain atrophying effects of Retail Hell, now it's an addiction. Andy is an unrepentant sequential art absorbist and comics are one of his passions. Other interests include Film, Music, Science Fiction and Horror novels and quality TV like Game of Thrones. He can talk about these at great length if only someone would listen. He lives a somewhat hermit like life in The Shire, spends too much time on social media and is still waiting to go on an adventure.
More Goodness
amanda connerbreakingcomics