Review: Kat on a Hot Tin Airship by Sam Stone 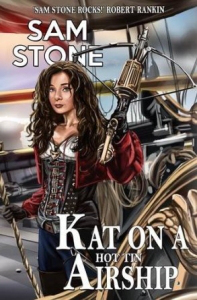 Whilst this novel is a sequel to Sam Stone’s previous horror/fantasy story Zombies at Tiffany’s, and utilises many of the same characters, Kat on a Hot Tin Airship is a radically different novel.

Set several years after the previous story, the chief character Kat Lightfoot is now a much different individual. Whereas before (and I am not giving much away, given the previous novel’s title) Kat was a shop assistant who found herself defending Tiffany’s from a horde of zombies, this new Kat Lightfoot is a much more capable “monster hunter”.

One of my main problems with Zombies at Tiffany’s was that the ending felt too contrived. Kat on a Hot Tin Airship corrects this by providing a reasonable explanation, whilst giving an overview of what has since transpired between the two novels. Also, having the sequel set several years later means Kat Lightfoot’s fighting ability is more down to her training as a “demon hunter”, rather than luck.

The title and front cover give a false impression of Kat on a Hot Tin Airship as the airship plays only a token role and the beweaponed Kat gives the idea of a high-octane adventure novel. Instead, what we find is a well-paced yet atmospheric supernatural horror set in the American deep-south. Admittedly the back cover does offer some explanation as to the true nature of the novel, but as first impressions go, the front cover is misleading.

All of that aside, Sam Stone evocatively describes the deep-south setting, and Kat on a Hot Tin Airship is a ripping yarn. The characters and setting are historically accurate, with the exception being the presence of the supernatural and other steampunk elements. It is in this regard that Sam Stone’s research is obvious, with the evocative descriptions adding to the mood.

Kat Lightfoot is a likeable strong-willed character who never feels invulnerable, however the other characters feel one-dimensional at times. Examples, such as Kat’s mother and sister, felt underused despite their presence being necessary for the purposes of the plot and the time given to them was insufficient.

Do not expect insightful commentary into embedded racism of the post-independence deep-south America as Kat on a Hot Tin Airship is a steampunk-fantasy. It may be popcorn reading, but it is an enjoyable one nonetheless with an intriguing murder-mystery added for good measure.

Science Fiction: the final frontier. These are the articles of the freelance journalist Peter Ray Allison. His continuing mission: to explore strange new realms of fiction, to seek out new genres and new visions of the future, to boldly geek where no one has geeked before.
More Goodness
historical-fantasysam stonesteampunk