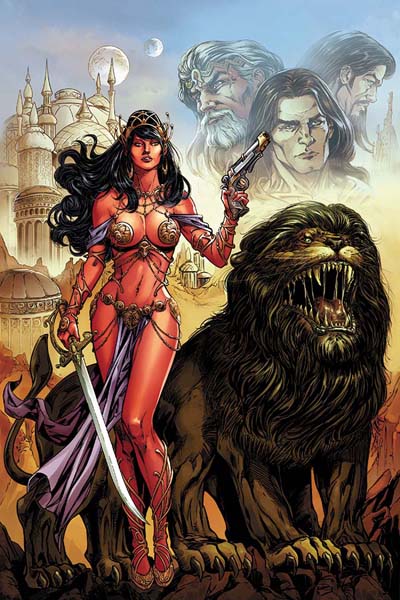 John Carter: Warlord of Mars is set to return from Dynamite later this year following the publisher and Edgar Rice Burroughs, Inc coming to a somewhat surprising agreement first announced earlier this year over a complicated rights dispute relating to several of Burroughs properties.

The new agreement will allow the publisher to feature elements that have not appeared in previous comic interpretations. Writer Ron Marz, known for an acclaimed long run on Witchblade, will be writing the new series along with art from Abhishek Malsuni and Neeraj Menon.

Marz had this to say about the news,

“This is literally a job I’ve been wanting to do since I was twelve years old. I was just the right age when I discovered John Carter, Dejah Thoris, Tars Tarkas, and the wonder of Edgar Rice Burroughs’ Mars. It fired my imagination like almost nothing else. So to finally get a chance to write these characters, to visit that world, is a dream come true for me.”

Dynamite Publisher Nick Barrucci had this to say,

“We are incredibly excited about Ron coming on board for this project. When we originally launched the Warlord of Mars series in 2010, Ron and I ran into each other at a comic convention, and Ron grabbed me by the shoulders and said something to the effect of, ‘How can you launch a John Carter series and not call me to write it?’ It wasn’t a question. It was a statement! As we looked at the potential creators for this series, we instinctively remembered Ron’s passion for the mythos. He is simply the perfect fit. Add in the fantastic art by Abhishek Malsuni and Neeraj Menon, this series will take John Carter to new heights.”

John Carter first appeared in 1912 as the lead character in Edgar Rice Burroughs’ first novel, serialized as Under The Moons Of Mars in the pulp magazine, The All-Story, it was later published as a complete novel retitled A Princess of Mars, the first of several novels featuring the character. The new John Carter:Warlord of Mars is set to appear in November.

Andy Haigh started writing to counteract the brain atrophying effects of Retail Hell, now it's an addiction. Andy is an unrepentant sequential art absorbist and comics are one of his passions. Other interests include Film, Music, Science Fiction and Horror novels and quality TV like Game of Thrones. He can talk about these at great length if only someone would listen. He lives a somewhat hermit like life in The Shire, spends too much time on social media and is still waiting to go on an adventure.
More Goodness
comicsDejah ThorisDynamite Entertainment