Steve Rogers To Be Replaced This Autumn

Captain America #25 is going to be one for the poly-baggers this Autumn, as Marvel have just announced that Steve Rogers will be retiring as Captain America to be replaced by an undisclosed  member of the Marvel ‘Verse.Writer Rick Remeder had a lot to say on the subject:

“This is the final bit of story that we started off in CAPTAIN AMERICA #1 with the opening of Dimension Z,beyond that we’ve also got a nice tie-in to AXIS. Zola and Red Skull have been in cahoots, Red Skull having been a consciousness saved by Zola and then given a new body. Now we’ve reached the payout. The issue itself is just bombastic action. It’s Steve Rogers doing his very best to deal with a huge escalation in Zola’s war against the Avengers and mankind. There are a number of guest stars in it. We’ve got Iron Man and Hulk and Thor doing what they can to stave off Zola and his invading armies.We’ve also got the return of a few surprise characters we haven’t seen in a while. We’ve got a betrayal of a cast member and we’ve got the reveal of the new Captain America.” 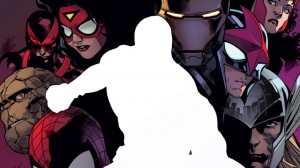 “Steve is in a spot where he’s still determined to serve, and he’s still determined to have a positive influence on the world around him,” Remender says. “He wants to work to defend his nation and his world, but he’s left in a physical state of not being able to perform. The choices he has before him as to who he’s going to select as his replacement seem very simple at this point—it’s a short list—but we’re revealing a number of characters in #23 who’ve been gone for a while, that decision gets a little trickier. Steve hasn’t had a lot of time to concern himself with these things. Literally a day after the Iron Nail debacle when he lost the Super Soldier Serum and rapidly aged to the physical age he would have been had he never been frozen, he’s forced to make some hard decisions.He’s a man in his 90s now without the frame or physical strength, but that doesn’t mean he’s out of the fight. He’s basically orchestrating things and playing tactician, fighting against Zola, using his friends in the Avengers to try and do so. He’s waging a war from a room rather than the front lines, which is new for Steve. There might be some shuffle boarding in his future. I do like the idea of giving Steve a bit of a break once the new Cap steps up and takes the mantle for a while. Steve’s going to continue to play a role in the series as mentor and tactician and eye in the sky, running ops and things. He’s got all of his faculties and is still the super soldier he earned the right to be called; he just lacks the physical form.”

Whether the new Cap will be an old acquaintance, a completely new character, or some kind of crazy time travel we do not know as of yet.

Who do you hope it is? Do you think this is the right decision? comment below, or at FB or Twitter.

Hailing from Kent, England, Mike is a writer, editor and podcaster who has just finished his degree at CCCU. He also is a drummer of 11+years, plays in several bands, and is available for session work. His other interests are Batman, music which doesn't suck and pizza. Follow Mike @The_Dark_Mike
More Goodness
breakingCaptain AmericaMarvel