Welcome back to the Geek Pride Comic Blog. This week we talk Batgirls, crossover ‘events’ and Grant Morrison. 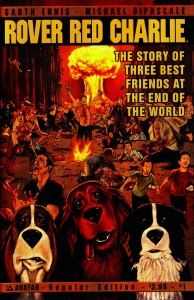 Laura Maier Swainston: Rover Red Charlie both broke my heart and restored my faith in humanity… or, I guess, caninity. That’s about it.

Ben Fee: Red Rover Charlie has been eyeing me for a while but…well…dogs.

LMS: It’s like if Disney movies had the balls to be realistic… the series is over now, so I’d say wait for the TPB. It’s pretty intense, in the best possible way .

BF: Good shout. I’m always a little sus about stuff from Avatar press. Reminds me of those underground comix I used to read as a nipper.

LMS: Yeah… they vary wildly in quality, but when it’s a recognisable name (as in the case of Moore, Gillen and RRC writer Ennis) you can’t really go wrong . 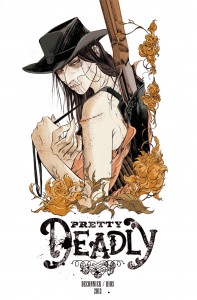 Becca Harper: I picked up the first 5 issues if Pretty Deadly. I really wanted to live with it being a female creator but if I’m honest I didn’t get past #3. I’ve never been a fan of the western genre and it just didn’t hold my attention. I’m even considering putting them back on eBay, which is unheard of from me.

Andy Haigh: I like the Western genre but the narrative style really put me off.

LMS: Kelly Sue’s deep thoughts at the end of each issue make the series

BH: I didn’t even look if I’m honest. It did inspire into digging out some 90’s X-Men. In each issue it seems that on every other page a mutant must remind the reader of their mutant powers and there are so many more thought bubbles, you know just in case we forget the plan firmed in the page before, quit thinking and kick ass mutants. Plus Wolverine is all like “I’m the best there is at what I do” I know already, you told us in the last issue. Still, much fun to read. 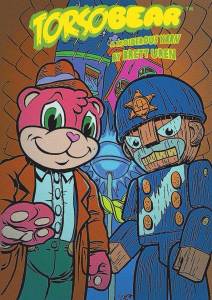 Mike Orvis: I haven’t actually read it, but I have also backed Torsobear on Kickstarter today. It’s a noir story with toys. It looks bitchin’ and includes one of the most underrated comic book writers of the last decade, Cy Dethan .

BF: Torsobear looks amazing. I love the Kickstarter video. Ok, I’m backing it too. Man, I need to produce something like that…

MO: Ahem, WE should do something like that. Wanna do a webcomic? 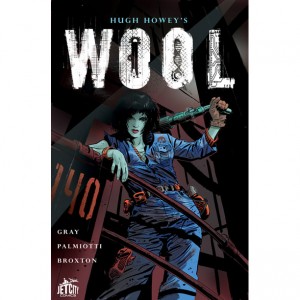 BF: This week I picked up the fantastic Wool, which is like a thriller/mystery set in a Fallout vault. So happy.

Callum Tyndall: The wool series is excellent, first and third books in particular. The second one wasn’t quite as good. 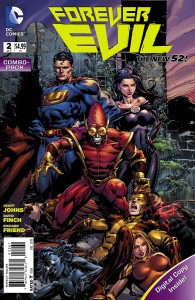 CT: Not got much reading done this week but finally finished off Forever Evil and felt mildly disheartened by the somewhat disappointing end.

BF: Ha! I know Callum, I hate when you invest in a long series and then you’re like “what the fuck did I waste all that time and money on?”

CT: I’m still enjoying the New 52 and I like the Justice League series but Forever Evil has been a bit iffy. I liked parts but then the end was a bit sudden and unimpressive and just seemed vaguely weak. I’m essentially just waiting for Umbrella Academy  Vol 3 though this year. I’m hoping it’ll be this year anyway. 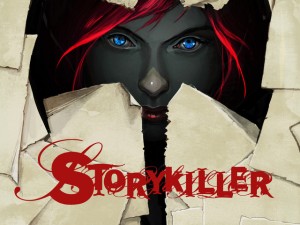 AH: I just got my copy of Storykiller by Kelly Thompson it’s not a comic but it has some awesome art by comic people. It’s a bit like Buffy or Fray really crossed with Mike Carey’s The Unwritten if you’re looking for a comparison. You should check it out. 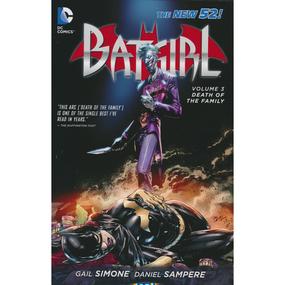 MO: I read Batgirl Vol 3 and let me tell you I for one do not appreciate paying for 2 issues of Gail Simone wonderment , an issue of Batman and then 50 pages of Mean Girls: Gotham edition. #bringbackourgails

BF: Batgirl is shit. Be a man and read Batwoman.

MO: Simone’s Barbara Gordon was one of the most earnest Batgirls I’ve ever met. I loved her. Batwoman is on my list.

BF: I have issues after Stephanie.

CT: Got to be honest, not as invested in batgirl as I probably should be but I have no time for Stephanie whatsoever. Annoyed me as spoiler, annoyed me as robin and never really got on the level of the other batgirls

BF: It’s all about Cassandra Cain. She was bad.ass.

CT: Yeah, I don’t really like that she’s pretty much just disappeared from the story

BF: New 52, man. Everything gets got. Expect if Grant Morrison’s involved. He was all like “Fuck your new continuity, I’mma bringin’ back Betty Kane, bitches.”

AH: Big fan of Morrison but not his superhero stuff.

BF: I think he definitely breathes new life into the crusty spandex, but you’d need to actually enjoy the genre in the first place. Can’t actually wait to see what he does with The Trial of Wonder Woman.

CT: The actual main problem I have with Morrison’s stuff is the art that often accompanies it. Can’t remember who the artist is for the life of me, Frank Quitely I think. It’s a unique style but just does not do it for me at all.

AH: The art can make or break a comic even if it is subjective.

CT: Exactly. Morrison does great writing and Quitely’s art is a very subjective thing for me but it really does just put me off the work. It’s why I’m not reading the Batman and Superman duo comic. The weird, sort of Japanese style just reminds me of the Wolverine ‘Snikt’ storyline, in which it worked, but it just doesn’t for Batman and Superman, they look odd.

AH: Aside from the subpar writing the art for Constantine is for the most part dire compared to pretty much any issue of Hellblazer. John Constantine just doesn’t look right done in a superhero art style.

AH: I read the first issue and thought it was just dire really. So many first issues just assume people are going to mindlessly pick up the next issue.

CT: When the New 52 kicked off I picked up a load of first issues but due to cost I’m basically just subscribed to justice league now and occasionally picking up the volumes of the other titles. Red Hood and the Outlaws I’ve really enjoyed and I’m currently waiting for volume 4 of but so many title are so meh.

AH: I never really read any DC outside of Vertigo besides Batman before the 52 kicked off. That was all the collected stuff like No-Man’s Land, Hush, Killing Joke, Knight Fall all the classic stuff. I picked up several when the 52 started then half of the stuff I liked got cancelled or it just started going nowhere the major problem with superhero comics in general. Pretty much anything that isn’t well established and doesn’t feature Batman, Superman or Wonder Woman will get cancelled, it’s pretty much guaranteed. I’m currently picking up Jonah Hex, Swamp Thing and Harley Quinn from DC.

CT: Yeah, the smaller titles do tend to fall by the wayside. But on top of justice league I’m really enjoying red hood and suicide squad as well.

AH: I used to pick those up but I ended up picking them up out of habit. If Ales Kot stayed on Suicide Squad it could’ve been really interesting but he only did like 4 issues or something. I can’t stand the way stuff gets dragged into yet another “Event” too.

CT: I would prefer it if they did it as single title events. The way the bat family all played into death of the family for example was awesome and worked well but I just don’t know if it was actually necessary to have more than the batman single story line. It didn’t lose anything by just reading that.

CT: It’s just such a pain trying to keep up with events. I didn’t even try with forever evil. It was ambitious and hugely marketable but an event that runs in every single title is just so impractical for readers.

AH: I find it hard to not just feel like the Big Two are just making a mug out of their fans with most events, like the suits are just sat there rubbing their hands with glee at the prospect of making so much money. There’s a fine line between worthwhile narrative possibility and shameless corporate marketing stunt.

CT: Pretty much. Some events are good but it’s such a scheme in that it costs so much to try and keep up with all the titles during the run of an event. It’s so much cheaper to just get a collected volume once the event is over.

Trapped in the past, Ben Fee finds himself leaping from life to life, putting things right that once went wrong, and hoping each time that his next leap will be the leap home..........
More Goodness
becpussben feeby andy haigh

A Thank You From Matt Smith!

Video: Most Complicated Board Game Ever…