previous
Mike Wolfer talks about new crowdfunding project The Curse Of Ragdoll
random
next
The Kill Screen #1: I Love You
Books and Comics
2 likes

Hi, comic-book lovers and welcome to the first in what will hopefully be an ongoing weekly blog covering recent news, releases and general stuff about your favourite four-colour medium. This week we discuss some new and recent releases, the fate of Nightwing, and why DC can suck it.

The following contains spoilers, swears, and a marked tendency to go off-topic… 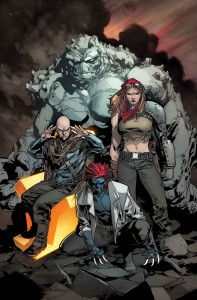 Ben Fee: All New X-Men #27 – Sincerely one of the best runs since Morrison. I’m absolutely loving the original X-Men team from the past, in the present, fighting the future thing. 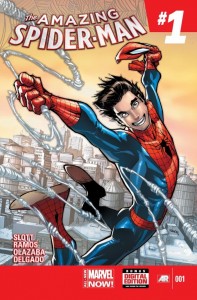 Callum Tyndall: I got The Amazing Spider-Man #1 through on Saturday. Pretty nice to have Peter Parker back after the weirdness of Superior and it’s got the humour of seeing him coping with his new found life.

BF: I’ve been Peter-Parkered out for a while now. Caught the first few with Doc Ock in the tights but far far preferred the Superior Foes title. Is it worth having a look at Amazing?

CT: I dunno. I mean, if you’re Parkered out it may not be for you but it’s pretty fun. Haven’t read Spider-Man for ages so I just thought it was a good point to come back in. Personally I think it’s pretty good, interesting to watch him adjust to the life Ock left behind. There’s a lot of good comedy in it that’s nice to pick up after a lot of dark shit going on in the last few months of Justice League and the whole Forever Evil saga.

CT: The whole Nightwing thing has pissed me off so much. But I also picked up Flash Volume 1 lately which is pretty good. Never been a huge fan of the hero so I’ve not really invested before but enjoyed the first volume.

BF: I got the first few for most of the new 52 – wasn’t really feeling it for any of them except Batwoman (obvs). What’s the deal with Nightwing?

CT :Well SPOILER ALERT but they killed him. The Crime Syndicate hooked him up to this bomb that was linked to his heart beat. So Luthor killed him, seemingly just so DC could cancel his solo run, presumably ‘cos it wasn’t selling enough?

BF: Lame-o. It would have been more interesting if he just left the superhero business to open a sandwich shop or something. A circus-themed sandwich shop.

CT: Yeah, I mean he’s really the only one of the Bat-family who could really replace Bruce so I’m hoping he’s coming back somehow. There’s enough ways in the DCU for him to be revived.

CT: Yeah…. But I think they’re bringing him back because they’re changing his title to Grayson where he’s like giving up being Nightwing to go undercover as part of Spyral or some shit…

Laura Maier Swainston: Loving Captain Marvel #3 and the quest to reclaim her spaceship, her escaped cargo/prisoner/person she’s trying to help, and her cat. She’s just the most awesome superhero ever. Well, I mean, she’s no Spider-Woman, but she’ll do…

BF: Captain Marvel is ace at the moment! I tried to get into her from the Marvel Now reboot but it was just too All-The-Things-I-Hate-About-Green-Lantern-y with her air force stories and then the time travel adventure with WW2’s sassiest company. This new stuff with her in space, though? Booming. Love the fact her spaceship is named after Harrison Ford. Even love the GotG guys showing up like they have in every other book… 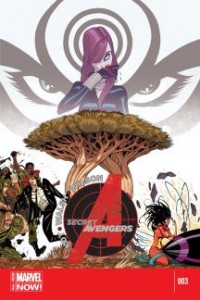 LMS: Secret Avengers #3 was good… I’m finding this run on SA a bit jarring, since the first two volumes were pretty dark and serious covert ops books, but I’m liking the style and tone of this book, what with the characters accidentally bumping into the fourth wall all the time.

BF: I am trying so hard to love this but the covers are awful and it seems entirely orientated towards the new movie and TV fans. Not that that’s necessarily a bad thing. 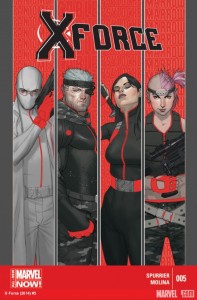 LMS: X-Force #5 wrapped up some Things We Didn’t Really Care About, but wrapped them up so well that I feel compelled to go back through the first four issues, and I love it when that happens. 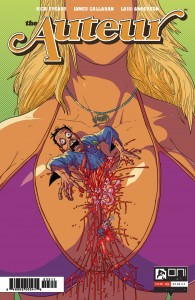 LMS: Oh, and in Auteur #3 (3 being the magic number for me this week it seems) three guys dispose of a body whilst off their tits on multiple drugs. I don’t there’s a single comic that couldn’t be improved by a scene like this. Seriously. 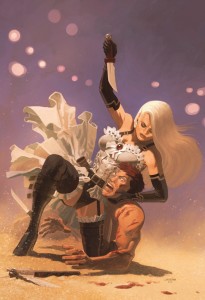 Andy Haigh: The latest All-Star Western is top stuff, like usual. One of the best things DC is putting out and it avoids all the event bollocks. Jimmy Palmiotti and Justin Gray have been writing Jonah Hex for about a decade I think, so it’s also avoided DC’s talent for cancelling anything that’s good or anything that doesn’t feature Batman and friends. Staz Johnson’s art is quality too.

LMS: I continue to be Very Much Not A Fan of everything DC does, but this week’s Batgirl had Ragdoll from the Secret Six in it, and it was all very wacky in the darkest possible way. But don’t worry, it had a happy ending *evil smile*. I’ve basically stopped reading everything DC-related since the New 52. I gave it a chance, I really didn’t like it, and now I’ve converted to Marvel and the smaller companies (Image, Dark Horse and BOOM! especially) although I’m buying up all the TPBs from pre-reboot. I’m still reading Batgirl, obviously (though I don’t accept it as canon and probably won’t buy the trades), Worlds’ Finest (ditto) Wonder Woman, Batwoman and Harley Quinn (all three of which- especially Batwoman- work with the old continuity) and I look in on Catwoman from time to time to see if she’s gotten any better. SPOILER: She hasn’t.

BF: To be fair on Catwoman though, where could she go after the peak that was boning Batman on a roof in issue 1?

Cristina Bogdan: Heh, Laura, I actually started liking DC with the new 52 thing  Never did like them before, but I’m easily pleased.

BF: I think it depends how invested you were in the old continuity. If you didn’t care about the old stuff, I reckon the reboot would have been amazing. For me it was a confusing mess of what was new and what was still true.

LMS: Yeah, like, I totally get WHY they did it, but most of the new stuff has left me cold. As for Catwoman boning Batman, I’m not even exaggerating when I say I felt a bit betrayed by that- pre-52 they had a complex relationship where, even if they weren’t together, they trusted each other and each knew the other’s secret identity. New 52, they have no clue who the other is, have no investment in each other’s personalities, but hey, let’s fuck on a rooftop, why not?

CB: Batman and Catwoman fucked on a rooftop? How modern of them! Was Superman ogling them from space?

CT: Nah, Superman was busy getting with Wonder Woman while flying. The DC men are classy guys. The whole Catwoman/Batman thing I’ve basically just ignored because it’s never gonna get better than it was in Hush but the Superman/Wonder Woman combo just seems a bit cheap with it essentially just being Superman: “I’m lonely and awesome” Wonder Woman: “I don’t want Steve Trevor but you’re on my level so let’s do this”

Trapped in the past, Ben Fee finds himself leaping from life to life, putting things right that once went wrong, and hoping each time that his next leap will be the leap home..........
More Goodness
ben feeby andy haighctyndall