Too short, No TV/Film adaptation in the works

The brainchild of Warren Ellis and Darick Robertson, “Transmetropolitan” throws a lot of people with its name. Several people apparently believe it has something to do with metro-sexuality and present day New York. This could not be further from the truth, and if you have not heard or indeed read this graphic novel, do it. I cannot give it higher praise, being a huge fan of gonzo journalist Hunter S. Thompson.

This novel’s premise is : Spider Jerusalem,  a jaded, angry writer, sick of ‘the city’ in the 23rd century, is dragged back into the population by his publishers. He has a contract stating he has to write several books against his will. Once he wrote the first, he became an instant celebrity. Despising the limelight he left the forever un-named city, preferring isolation in the hills. 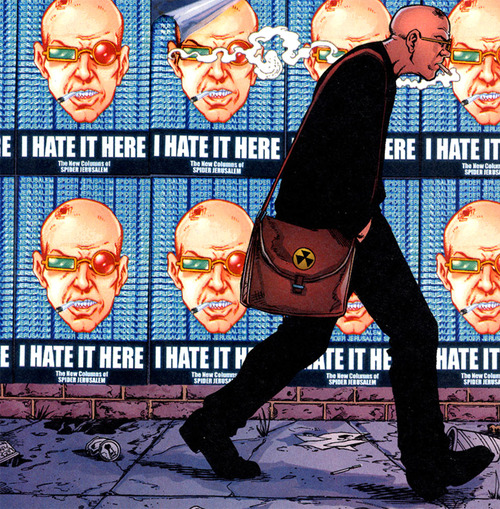 Unfortunately for Mr Jerusalem, he can only write in the city, a place he hates and despises. After the first half of volume one I could see why. Such is the way this graphic novel is worked, it shows the extremes of where our current lifestyles are taking us.

Never before has a dystopian future been given a cyber-punk twist and yet been delivered to us in such a real, down to earth way. With corporations and politicians both screwing the population for their own gain; religions celebrating paedophiles; and advertising everywhere, this is truly Warren Ellis’ angry views on how the world is going, and how we as a society are taking everything for granted.

Every single person in the city is connected via the internet; nothing goes on in the city without it being recorded for everybody to see (if they look hard enough). Big Brother of George Orwell aside, that last point is very well exploited by our main character, the anti-hero, Spider Jerusalem. 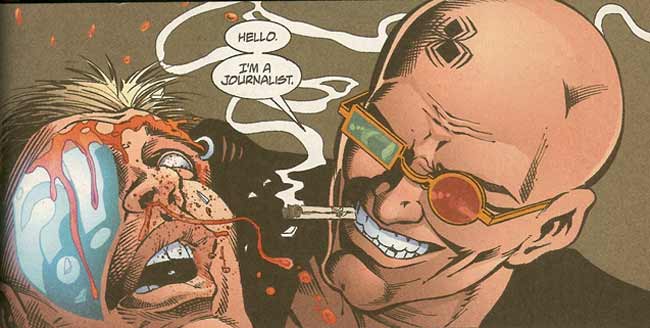 Spider Jerusalem, who is fuelled by anger and drugs, unlike other journalists/reporters of the age will stop at nothing for the truth. He doesn’t swallow what everybody’s PR team tells them.  He takes to the street and finds out for himself – be it humans injecting themselves with alien DNA to perform surgery or crooked cops looking to kill people and create riots.

He is an unwilling hero to the masses following the success of his book and makes no qualms about who he is, with tattoos all over his body, including a spider atop his bald head. He is what many would call eccentric, or a lunatic depending on your point view. Whether it be adopting a cat with two faces or having a drug addicted vending machine, everything he does is larger than life.

Warren Ellis is well known for his sociocultural commentary and this is exactly the case here. His writing is exceedingly smart, full of contempt, but very funny. This is not a children’s comic, this is a full blown 18+ graphic novel and doesn’t apologise for it. It is aimed solely at intelligent, science fiction loving adults and hits the mark across the board.

In fact I would not be amiss to say that after reading this 10 volume series, it will make you want to know what’s going on in and around your own life – to help you figure out what is actually worth fighting for and what isn’t worth your time.

“Transmetropolitan” has been published under the ‘Vertigo’ label, an off-shoot of DC. Vertigo was created for DC to be able to write and make more adult-based creations. It was a place where they were allowed to have profanity and nudity without judgement. Whether it be “DMZ”,” Y: The Last Man”, “Preacher” or “100 bullets”, it gave writers a lot more freedom than they would be allowed at DC.

It is also helped by some fantastic artwork done by Darick Robertson. Robertson is an American artist who is best known for his work with DC and Marvel, including “Wolverine” and “The Justice League”. He is also the artist for one of my other favourite graphic novels, which is the satirical superhero story ‘The Boys’ which shall be getting reviewed by me at a later date.

Upon researching further into Ellis and Robertson’s brainchild, I became elated when I came across talk about it being turned into a film or animated TV series. It was going to be with the aid of Patrick Stewarts’ production company ‘Flying Freehold Productions’. Sadly however, Ellis explained during a London comic convention, production costs would be too expensive. This reviewer shall always live in hope that I manage to see this visage in an animated TV series. 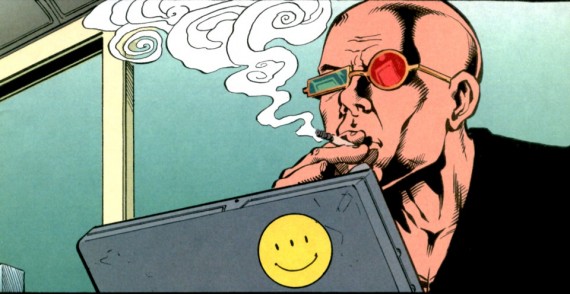 In conclusion, Transmetropolitan is a dark, twisted series well worth a read. Whether you’re a fan of great artwork, social commentary, and witty dialogue, or maybe have a penchant for an insane man with a bowel disruptor gun, this series is for you. I believe all the books are still available online despite finishing a decade ago.

As an aspiring journalist I have found a home here at geek-pride, where I can write upon many subjects. If anybody has something they believe should be reviewed or newsworthy then feel free to send me a message, I always enjoy talking to people.
More Goodness
100 BulletsBig Brothercomic books