Why is Fantomex even there?

Storm, Psylocke and Puck confront Spiral about the drug she’s been peddling and the mutant girl. A rather angry and rather more powerful Bishop continues to cause problems and Fantomex and his clone/lover continue their crime spree whilst thinking about Psylocke.

Reading the New Uncanny X-Force from Sam Humphries is a disorienting and bewildering experience it has to be said.

So far, Storm and Psylocke were sent by Wolverine to meet up with Puck to help out with a problem, this problem turned out to be a strange drug called ‘Tao’. They discover that Spiral is behind distributing this drug but the source of it is a girl called Ginny, also a mutant. A far more powerful Bishop appears and causes carnage, whilst Fantomex is doing something with his clone/lover. 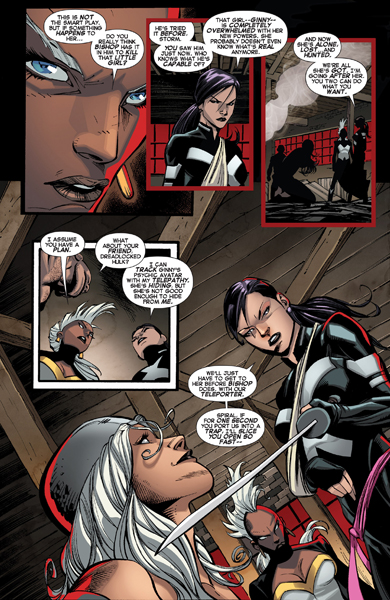 Things get personal between Spiral and Psylocke.

There are numerous flashbacks this issue, one detailing Psylocke’s past and shedding some light on her vulnerability, another dealing with what happened to Spiral and a brief one about Storm’s youth. For the most part anyone reading Marvel comics should already be well aware of these events with the exception of Spiral’s but this adds some context to events as they unfold.

Spiral’s story actually makes her seem far more sympathetic and it’ll be interesting to see where the character is headed. If she ends up joining the team that would actually be both left-field and a pretty cool development.

By far the best part of this issue is an incredibly well done fight between the team and Bishop in a subway tunnel with the fight being punctuated with trains speeding through the pitch black tunnel.

The issue ends on one of the most WTF moments I’ve seen in a Marvel comic and the confusion of the reader is shared by Psylocke as she’s is staring confused at the mindscape of Bishop which is distinctly M.C. Escher like. 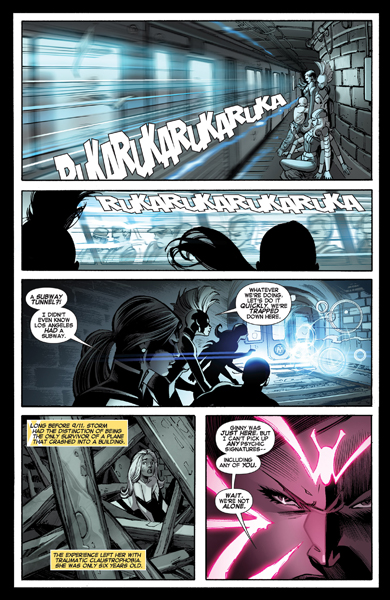 The art from Ron Garney is clean and crisp, it should also be noted this issue has a rather large art team with Scott Hanna, Adrian Alphona, Christina Strain, Martie Gracia and Israel Gonzalez all featuring and having a different art team on the mindscape pages is a neat touch.

Also the fact Puck spends the whole time bare chested made for a nice inversion of the usual half-naked women everywhere problem that persists in comics.

Entering into this latest issue it’s hard to tell where any of this is supposed to be leading and it’s pretty much the same after reading it. This is a stark contrast to Rick Remender’s streamlined and focused run on the title. The main story maybe intriguing but the sub-plot involving Fantomex seems completely and utterly superfluous at this point.

Andy Haigh started writing to counteract the brain atrophying effects of Retail Hell, now it's an addiction. Andy is an unrepentant sequential art absorbist and comics are one of his passions. Other interests include Film, Music, Science Fiction and Horror novels and quality TV like Game of Thrones. He can talk about these at great length if only someone would listen. He lives a somewhat hermit like life in The Shire, spends too much time on social media and is still waiting to go on an adventure.
More Goodness
Adrian AlphonaBishopcomics