Warlord of Mars: Dejah Thoris: The Vampire Men of Saturn

Truly diabolical art which has scant regard for anatomy and panel composition.

In self-imposed exile due to her actions nearly causing the fall of Helium.(the city she called home), Dejah Thoris is now wandering the northern wastes racked with guilt for her actions- even though her will was not her own. An encounter with a member of a mythical race in the wastes leads to Dejah being kidnapped by the Vathek;a dominant vampiric race. Finding herself on a different planet, far from her home of Barsoom, Dejah must stop the Vathek’s plans to make slaves of everyone on Barsoom.

Warlord of Mars: Dejah Thoris( like its parent title) is set in the pulp sci-fi world created by Edgar Rice Burroughs for his Barsoom series 100 years ago. 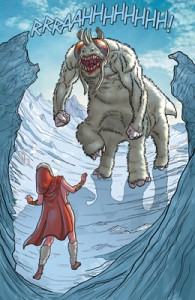 This title though is set before the arrival of John Carter ( the hero of Warlord of Mars), 400 years before- and shows Dejah’s adventures in that time.

Dejah Thoris is a red skinned stunningly beautiful princess of Lesser Helium and a skilled warrior and accomplished fighter (even though Helium is a patriachal society) .

The inhabitants of Mars wear very little in the way of clothing due to the arid climate; Dejah’s clothing consisting of little more than jewelery and a thong. This makes the title an easy target for accusations of sleazy sexploitation, but it should be noted that the men for the most part are just as bereft of clothing.

The previous volumes of this title have been an enjoyable exploration of pulp sci-fi. A potentially endless series of untold stories, as the foundation and the perils and pitfalls of Martian living being a fertile basis for adventures taking in strange creatures and exotic locations.

That being said, there’s a fundamental problem manifesting now: Previously art on this title has been both impressive and dynamic courtesy of Carlos Rafael. Handling bizarre creatures, alien landscapes, action and dialogue driven events with ease, with the assistance of Carlos Lopez’s colours. As of issue 14 Rafael left the series which has lead to this collection featuring art from one Deborah Carita, which is some of the worst art to feature in anything in a long time.

Even if a story is well written, bad art will break a readers immersion in that story, which is exactly what happens here; almost every other panel features yet another blatant display of a fundamental failure of the understanding of anatomy, especially female anatomy. This is a huge problem in a title with a female lead, even bigger when she has little in the way of clothing. It’s pretty surprising to see such amateurish art in a title from a well known publisher, it wasn’t too surprising to learn that Deborah Carita hasn’t done much work in comics. Some of this is so bad it makes Rob Liefield look like Henry Gray.

The story from Robert Place Napton has some nice ideas in the mix. Andlaust (one of the Vathek) becomes infatuated with the martian princess Dejah after tasting her blood, 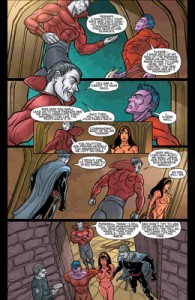 The Vathek are not known for their hospitality.

She stumbles across a resistance against the Vathek( oppressors by the Palidor a subjegated race). The idea of ‘Blood camps’,where the Palidor are herded together awaiting their fate, to be drained by the Vathek or having one of their officers take a special interest and keep them alive for numerous feedings is genuinely chilling.

This title does seem at risk of repeating itself though with Dejah seemingly becoming a damsel in distress during writer Robert Place Napton’s tenure, which goes against the roots of the character.

There are a few effective images, one of a forlorn Dejah looking at her native Barsoom aka Mars and there are some cliffhanger endings to the issues featured too but these are somewhat blunted by the shockingly bad art.

More alien aspects, like the dragon-like creatures which are used for transport by the Vathek fare better and it’s pretty obvious that male anatomy is clearly less of a challenge. Although there are also numerous examples of a failure to understand panel layout and positioning which becomes increasingly frustrating as the story continues.

The interior art is a stark contrast to the stunning covers from Paul Renaud and Fabiano Neves it has to be said.

Andy Haigh started writing to counteract the brain atrophying effects of Retail Hell, now it's an addiction. Andy is an unrepentant sequential art absorbist and comics are one of his passions. Other interests include Film, Music, Science Fiction and Horror novels and quality TV like Game of Thrones. He can talk about these at great length if only someone would listen. He lives a somewhat hermit like life in The Shire, spends too much time on social media and is still waiting to go on an adventure.
More Goodness
breakingcomicsDejah Thoris