Okay, that title sounds a lot more interesting than: “People flail over the possible return of the vigilante saints to the big screen.“ Actually that sounds good too. Now that my excitement has been (moderately) contained here goes nothing. 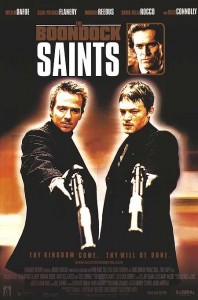 A lot of you (hopefully) are aware of the existence of a movie called The Boondock Saints. It came out over a decade ago, faired badly in movie theatres, but became a cult hit, with people passing the DVDs around, the fanbase growing slowly but surely. Now there are events,  super special screenings of the movies, secret hand-shakes, tattoos, the works. The point is it grew and it changed, becoming the movie of the masses, mostly because it speaks to that person inside us that rants at the TV screen, shouting out how the world would be a better place if we could pick up a gun and deal our own brand of justice. It might sound like a bad message to send out, but we all know none of us has been exempt from feeling like this, at least once.

The movie was followed by a sequel, that came almost ten years later, still starring Norman Reedus and Sean Patrick Flannery as the two Irish brothers that picked up on God’s call to vanquish evil by beating it at it’s own game. Guns blazing,  humour, Julie Benz to replace Willem Dafoe (who made a very attractive woman in the first movie), Clifton Collins  Jr. and many bad guys made for an entertaining film, even though it lacked that certain something that made the first one special. It also needed a little more character development, ten years had passed after all, Troy Duffy! Still All Saints Day was worth the watch. And now! Drum-roll please!

Troy Duffy, the mastermind behind this project, supposedly announced for wegotthiscovered.com that a third movie is in the works, one that hopefully won’t come out when both Sean and Norman are old, grey and walking with the aid of a pretty nurse named Frank. Supposedly the script is half-way done and we can expect a TV series to follow, featuring The Saints (although it’s unknown if Connor and Murphy will be the leads or if Norman Reedus and Sean Patrick Flannery will even be involved). So far it’s just hear-say, but one can only hope at least one of this two projects will be turned into a reality, because I could do with having the Saints on my screen on a weekly basis, not to mention my Boondock Saints DVDs have been complaining that the promised trilogy isn’t complete.

For those of you that have lived under rocks or other places without DVD players, movie theatres or internet access, get your butt into gear and watch the first two movies. You’ll definitely love them (the first one more than the second one, in most cases, I’m not going to lie about that) and then you’ll be fully prepared for the experience of a third movie. Check out the trailer for the first movie below and be sure to stick around Geek Pride, we’ll do our best to bring you the freshly out of the oven news about it.

What's there to say about me? I love the sci-fi and fantasy genre when I read, but I am in no way limited to that alone. I do think Frank Herbert deserves a statue for his writing(if there is one, point me in that direction, please). I enjoy writing quite a lot, but I am also kinda lazy. If you want to make me happy give me books or Doctor Who collectibles. Or a real TARDIS, in which case I will love you forever.
You might also like
breakingFilmnews