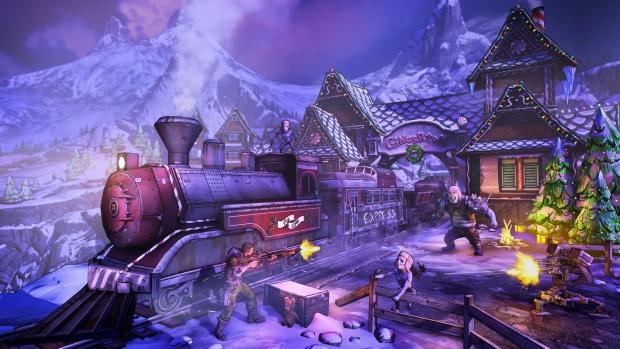 Gearbox has once again been keeping busy, and is now just about ready to treat Borderlands 2 players to yet more DLC for their FPS RPG loot hunting extravaganza. How Marcus Saved Mercenary Day is the newest of Gearbox’s Headhunter Packs, after the Thanksgiving inspired  Horrible Hunger of the Ravenous Wattle Gobbler and Halloween themed TK Baha’s Bloody Harvest. These packs give players mini-sized DLC experiences with new missions, areas and unlockables, and this newest Christmas themed pack is very reasonably priced at just £2.39 / $2.99 / €2.99.

How Marcus Saved Mercenary Day will reportedly follow the Vault Hunter’s exploits in the frozen land of Snowy Bottom. Pandora’s favorite heavy weapons dealer has had train full of his munitions disappear on its way to the Christmas town of Gingerton, and do he’s enlisted the player’s help to uncover the mystery. Naturally, things aren’t quite that straightforward, as  the Abominable Mister Tinder Snowflake turns up, eventually leading to a showdown where players can slay the abominable snowman and nab themselves a unique snowman head for their characters.

Matt, 24 last time he checked, was born and raised in Manchester. A self-styled geek; when he isn't annoying his other half by fitting in as much gaming time as he possibly can, he can be found getting his fix of Fantasy and Sci-Fi elsewhere by reading, writing, or watching TV Series and Films. He is also a Michelin 3-Starred Chef in his spare time, and can be found experimenting in the kitchen, and generally poisoning his friends with obscure and mysterious dishes.
You might also like
2Kborderlands 2breaking