It seems that John Barrowman is in trouble with the BBC. In recognition of the Doctor Who 50th Anniversary, John had intimated that he was in talks with the BBC surrounding his involvement in the exciting endeavour.

However, a recent tweet from him saying “Re 50th I didn’t say in what capacity or what medium so stay calm and carry on. Jb” set Whovians wondering and worrying about the whether he was actually going to be involved and the BBC foaming at the mouths with anger.

Re 50th I didn’t say in what capacity or what medium so stay calm and carry on . Jb

While John, who plays the character Captain Jack Harkness, is a great actor and portrays this character with every bit of charm and zeal we would expect, would it be a shame to not have him in the 50th?

Some may scream and shout “Yes! He must be in it!” Some, however, may sit back, relax and shrug, “Meh, I’m not fussed”. I guess it just depends on your fandom.

Read the full article on digital spy and speculate for yourself. Just remember friends, it’s all speculation so… 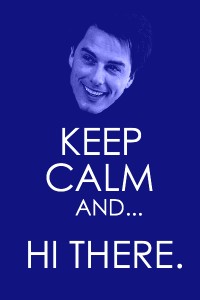 Here is me in the form of a haiku: My name is Jodie, Love fun, love hugs, loving life, To write is to be.
You might also like
50th specialBBCbreaking