Cosplay Catch Up – An introduction to madness 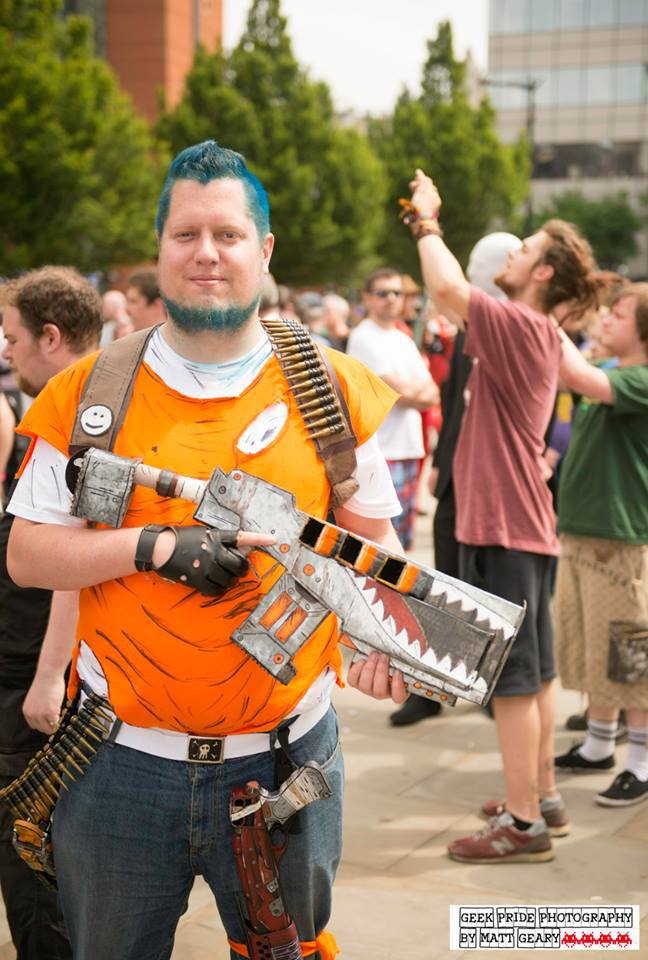 I decided with the arrival of New Year to start writing a bi-weekly cosplay catch up article for Geek Pride, basically this blog will track my cosplay adventures over the course of this year (I feel big things coming!).

I am a fairly new cosplayer, I put together a vaguely rubbish Hobbit costume for Manchester MCM, it wasn’t any particular Hobbit, just a Hobbit in general. I wasn’t really feeling it at all. I was more excited for my partners cosplay that I had made him, more effort and love went into his Salvador cosplay from Borderlands 2. I didn’t particularly enjoy the day as it was too warm, I felt uncomfortable and other than my partner being stopped every so often for a photo I felt very much left out of the whole atmosphere.

For some reason, which I can’t quite remember I decided to do a Sister Of Battle cosplay from the Warhammer universe, having never played the game I immersed myself in the artwork which was beautiful and bought some EVA foam to start making some pieces of armour. A friend then suggested London MCM in October last year so I rushed to finish my armour. I felt 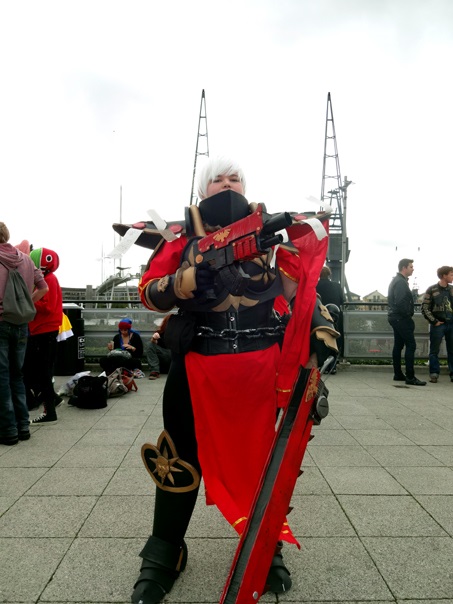 like crap the morning I had to put it on and parade around London Comic con in it My confidence has never been great but the first time in a hand cosplay, boy that was sickening…

But slowly, after a while, it occurred to me that I felt so much more a part of it this time! I felt like I could approach people, talk to people and people were stopping me for photos, admiring my handy work. I loved speaking to people who appreciated just how much effort I had put in to my outfit! It wasn’t a perfect cosplay, without flaws, but it was the start of something and it made something click in my mind. I wanted to make things and more so I wanted my cosplay props to make people feel happy when they saw them. Quite selfishly I wanted to feel more pride in the things I could make. (This may sound vain and like I am slightly full of myself but the people who know me closely know that I needed this kick in confidence) So I made a page on facebook, took on the name of Miss Muca for my cosplay stuff and that was that! 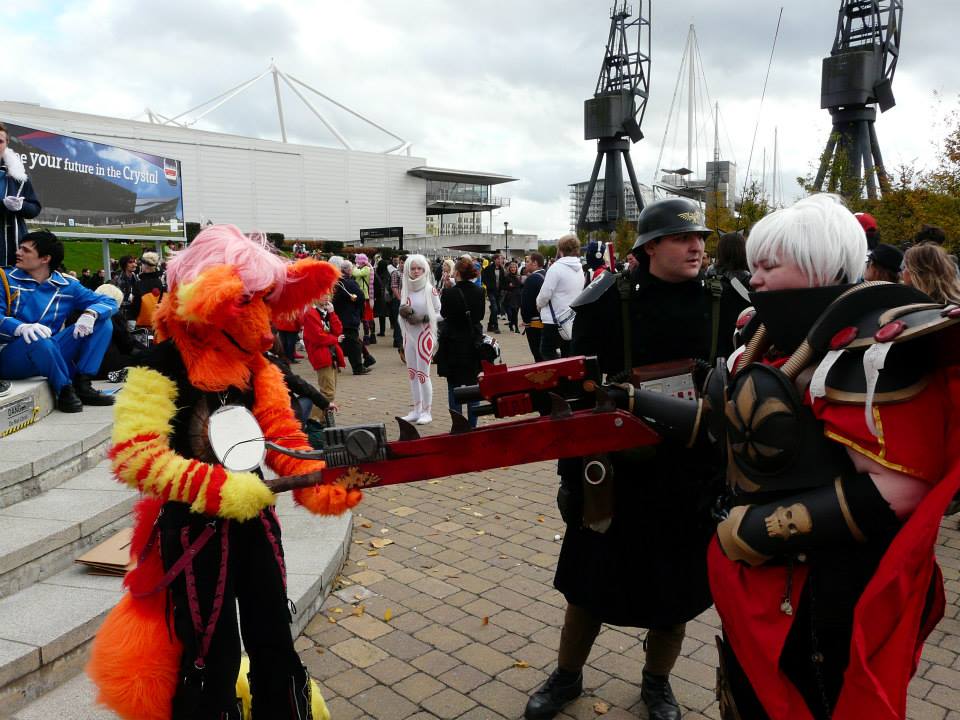 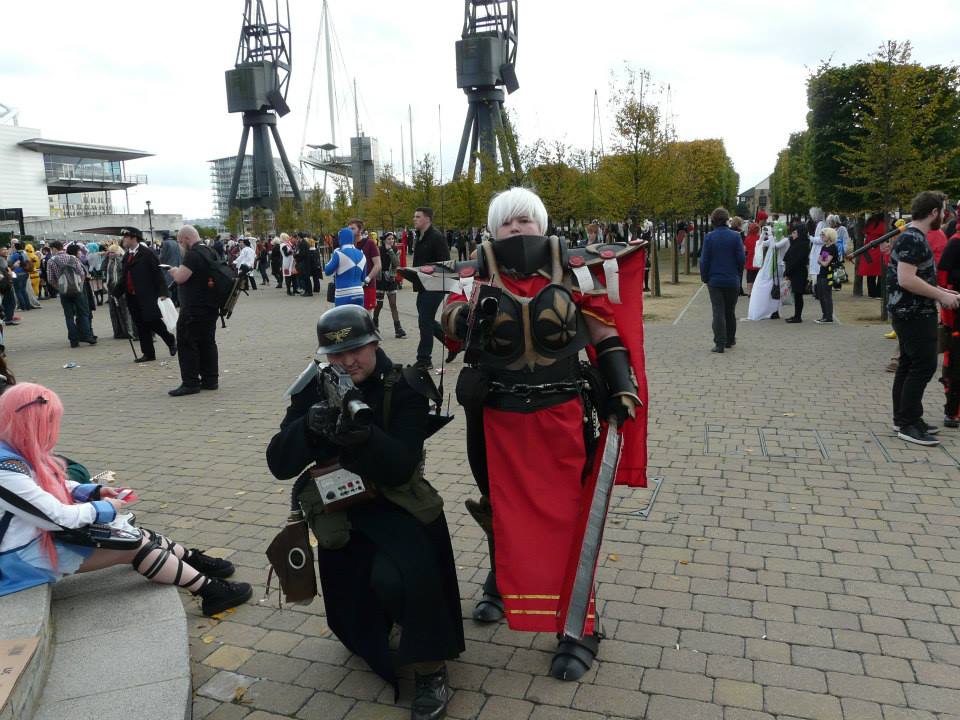 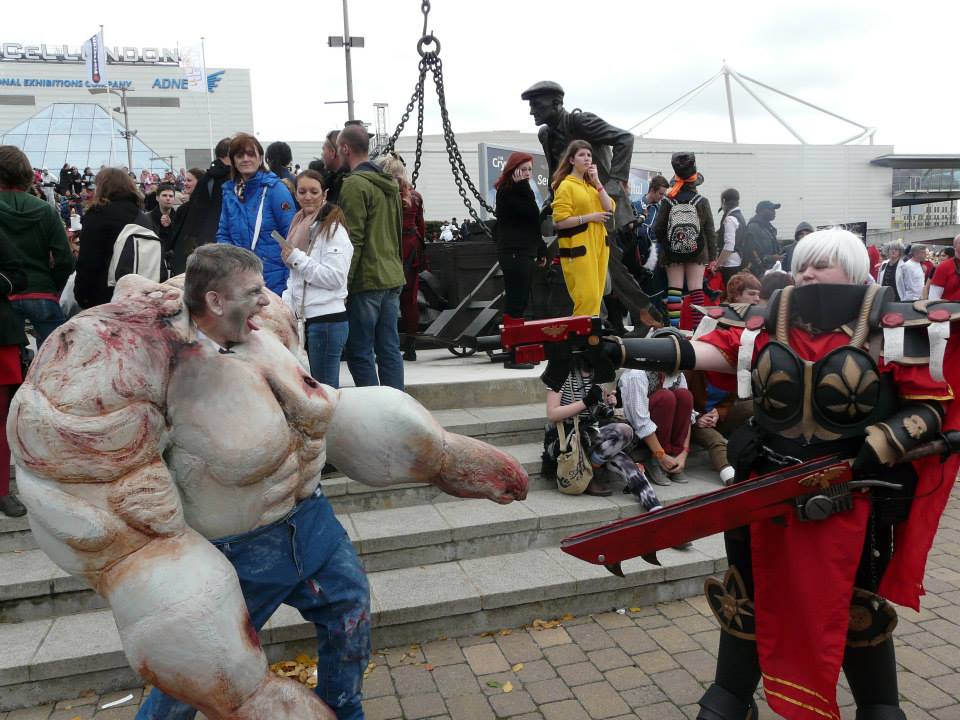 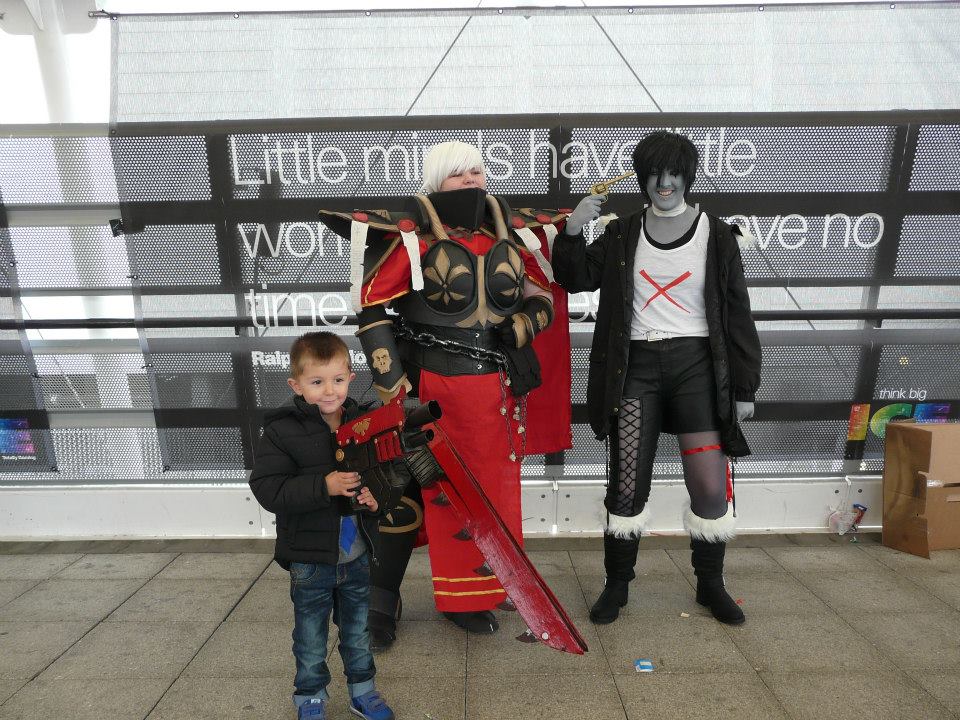 So now it is the New Year and all I have done, so far, is keep a hold of a fraying rope that is stopping me from being completely and utterly possessed by the hobby! New Year’s eve I spent with my rabbit, Rambo, who is also a cosplay fan (he really gets into character!) And together (okay he ran round the room destroying stuff and eating all of the things) we started the construction of a Predator helmet. Nope, I am not going to cosplay this any time soon because of money and a couple of other cosplays which come first in line to be made. But yah know what? I am really really compulsive and the urge to attempt the base of a Predator helmet was far too much to reject. 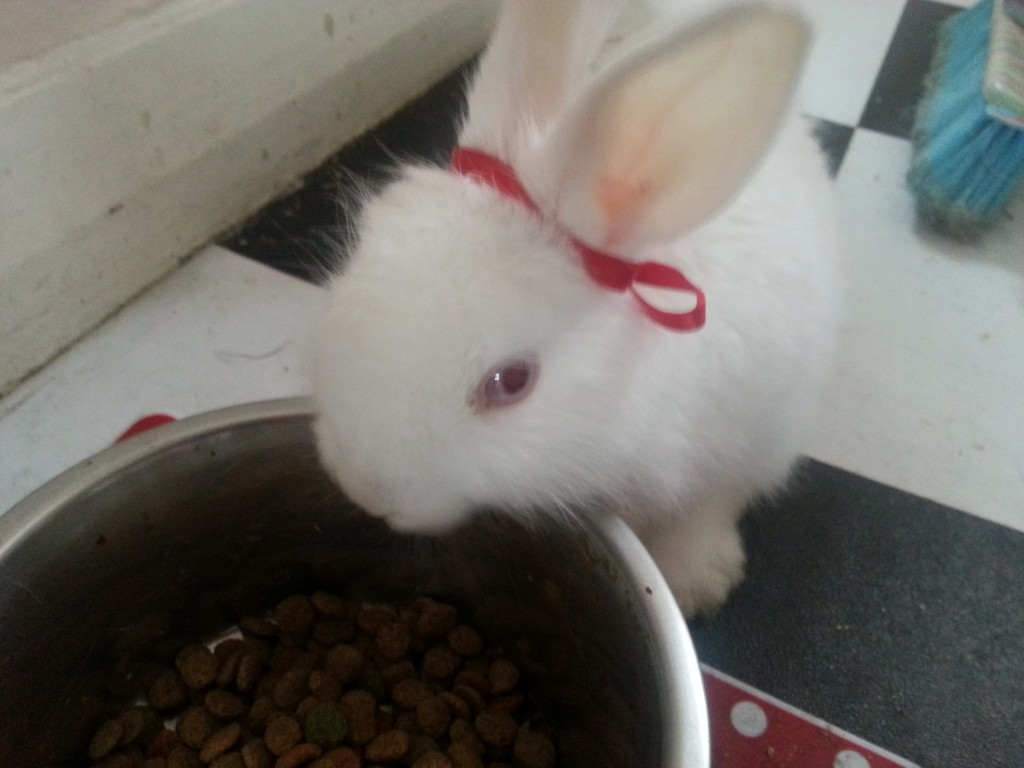 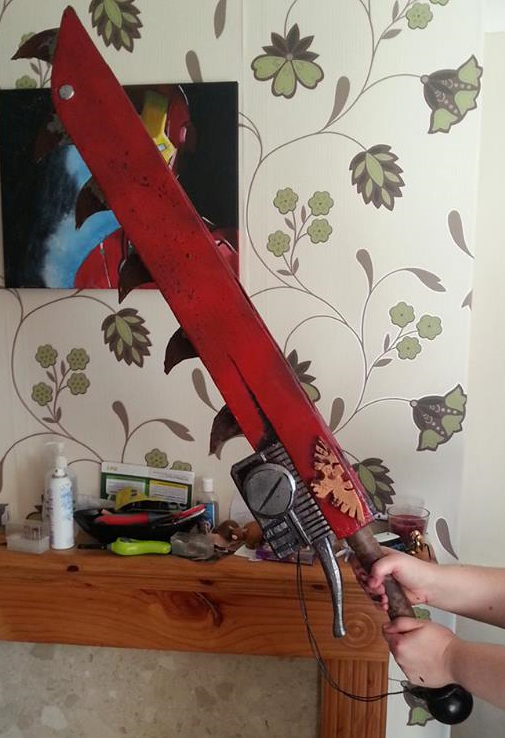 As I have proved before with my Sister of Battle Sword, which I produced articles on the progression of, I don’t use fancy expensive materials for my cosplay builds. Mainly because of money but also because I feel like I need to prove to people that you don’t have to spend an absolute fortune to make something awesome. Yes, it might not be film perfect but it does have the potential to look just as epic… If you are willing to put love and effort into it! Which is something I love to see when I go to cosplay events.

I spoke to one guy at London MCM, who was praising me for my Chainsword, he went on to tell me he hoped to work with better materials than cardboard and duct tape at some point to which I just laughed and responded “This is made from cardboard.” He didn’t believe me at first but I explained my process. He then kept mentioning about how his sword looked beside mine (I know that sounded wrong) but I genuinely thought his duct tape and cardboard sword looked amazing! I told him that he had put the effort into making that sword and that was worth a hell of a lot more than expensive material!  More than anything you should be proud with what you have achieved with a crappy material such as cardboard!

Anyway! Returning to my Predator helmet, basically I got out all my scrap cardboard and EVA foam from my last cosplay and put it in a pile on my floor and then stared at it for a good long while, rearranging pieces, trying to work it all out in my head. The only online tutorials I could find  were for pepakura or clay sculpts. Which didn’t suit my needs at all. So I looked at pictures on google and well… did what I do best – made it up as I go along. Hence no tutorial because to be quite honest; I don’t really know how it all came together well enough to vaguely represent a Predator mask.

As much as I know, I started off with the nose bit, getting a rectangle of foam and holding it up to my face while looking in my computers webcam and snipping at it till I thought “Yup, that’ll do.” Next I found a piece of foam exactly the right shape for the rim around the skull piece. Score! Just needed a bit of adjustment. The cheek pieces were a nightmare, I couldn’t get them to shape right so I had to attach additional pieces of cardboard inside of the helmet to bend it into a shape that looked right, so that it bent around my face. The skull piece is simply a piece of cardboard. For now, because I wanted to try it on, I have glued a couple of beautiful pieces of baby blue ribbon to the back so it can be worn on your face. (Considering keeping these, make it all nice and pretty! Haha) 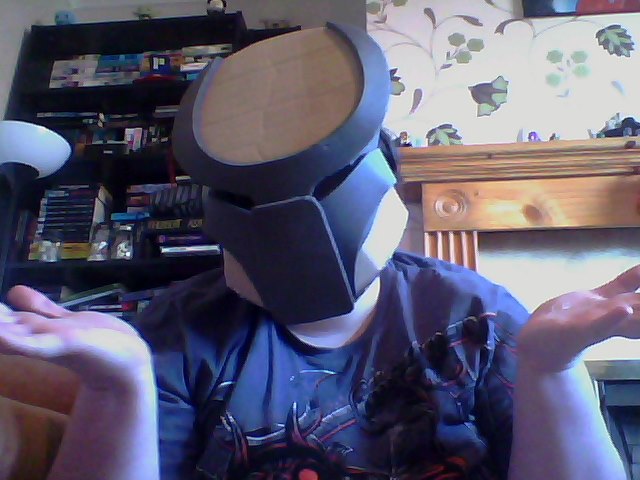 What I will do next is sand down the EVA foam into the shape I want so it looks a bit smoother around the edges. Paper Mache over the cardboard bits, using this to add a curve to the skull bit and coat the EVA foam in glue. I will correct any bits that aren’t quite right and then cover the whole thing in multiple layers of Gesso before Sanding and painting! I also found a simple and cheap tutorial for the dreads which can be found here.

Can’t wait to have this finished and just hang it in my living room! Hell of a talking point! I also had this fab idea of making an Alien head into a shield that can be worn over my arm… (Which I now feel like I NEED to make!)

The first cosplay I want to do this year is an original version of Fionna from adventure time, with additional armour, I am hoping my materials for my Fionna cosplay comes soon, to take my mind of my crazy Predator cosplay making obsession!

If you would like to check out more photo’s and nonsense visit www.facebook.com/missmucascosplaycorner

See you next time!