Doctor Who Enemies: The Daleks 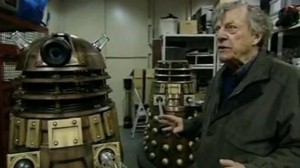 Raymond Cusick with his creation

The brain child of science fiction writer Terry Nation (Survivor, Blake’s 7) and designed by Raymond Cusick (BBC Staff Designer) the Daleks are the most iconic of the Doctors enemies. 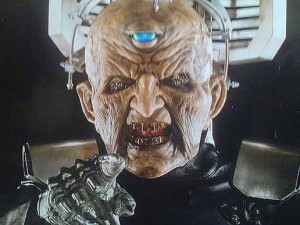 Davros: Creator of the Daleks

Created by Davros during the final years of a thousand-year long war Davros genetically modified the inhabitants of Skaro , known then as Kaleds. He integrated them within a robotic, mechanical shell. To complete the modification Davros finally removed their ability to feel pity, compassion or remorse. Famously known for their catchphrase ‘Exterminate!‘ they are well-recognized in British popular culture. In July 2013, the BBC announced that the Daleks will return in the 50th anniversary special later this year. 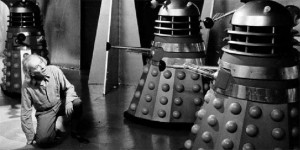 William Hartnell and the Daleks

They burst onto the television screen back in 1963 in the second series of the show, coming up against Doctor of the time  William Hartnell, his grand-daughter Susan (Carole Ann Ford), and her teachers Ian Chesterton (William Russell) and Barbara Wright (Jacqueline Hill). In the serial the party land in an alien jungle and are captured by the Daleks, mutated creatures, surviving off the radiation that remains in the atmosphere after a nuclear war they waged with their enemies. 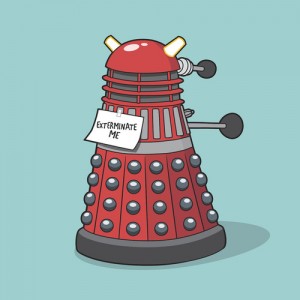 Daleks were in danger of becoming too kid friendly when they were re-modeled during the episode ‘Victory of the Daleks’. In this episode five all-new ‘true’ Daleks were created, all coming out in bright Crayola colours leading to the British press to label them ‘Teletubby’ Daleks. Children loved them instead of feared them, wanting to collect the whole set instead of hiding behind the couch. The backlash from Doctor Who fans quickly destroyed any chance of the ‘Teletubbies’ coming back.

As it stands the Daleks are definitely coming back in the 50th Anniversary and hopefully many more times after that.

As an aspiring journalist I have found a home here at geek-pride, where I can write upon many subjects. If anybody has something they believe should be reviewed or newsworthy then feel free to send me a message, I always enjoy talking to people.
You might also like
BBCbreakingDaleks