Dr Ian Turner and the Science of Superheroes! 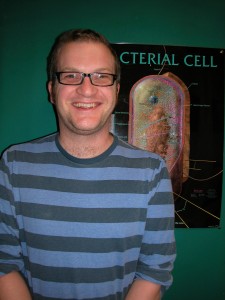 By night a superhero in training, but by day Dr. Ian Turner works at the University of Derby as a senior lecturer in Biology and Forensic Science and teaches genetics, molecular biology, science communication and all aspects of forensic investigation. But he isn’t just a science geek – he has Star Wars Lego and Marvel Potato Heads in his office! I caught up with him recently and asked him a couple of questions about his work, his interest in comic books and why he chose to lecture on the science of superheroes.

How long have you been a comic book fan and what are your favourite characters?

I have been a comic book fan ever since I was little, I grew up in the 80’s which was a great time for comic book style cartoons such as He-Man, Thundercats, Dungeons and Dragons and the show that kick started my love of comics Spiderman and His Amazing Friends. The show featured Spidey, FireStar (Angelica Jones) and Iceman (Bobby Drake) and I remember clearly running round my house shooting imaginary ice from my fingers to make Iceman-style platforms to travel around on.

After this I started reading comics mostly Spiderman, I distinctly remember reading Spiderman and His Amazing Friends and The Complete Spiderman. I have stuck with comics most of my life but am not an avid collector! My favourite character is still Spiderman! I am also fond of the X-men but I will read anything that someone recommends to me as worth reading!

You have previously lectured on the science behind some of the comic book world’s best loved characters. How did you get into science and teaching and what made you want to combine your love of science with your interest in comics?

I got into science the traditional way, fell in love with Biology at school and chose Biological Sciences as an undergraduate. The rest, as they say, is history!

I guess the inspiration to lecture on the science of superheroes came from my subject (genetics) and the strong links in comic books between mutation/DNA alteration and superpowers and a desire to pass on my passion for science to the public. In my spare time I work for a charity called the British Science Association that aims to ‘engage the general public in science’ and I was working with a charity called AimHigher that worked at promoting science in schools that had a low number of students attending University. I wanted to come up with a talk that made science fun and used a medium that all children could relate to, that’s where Superheroes came in! 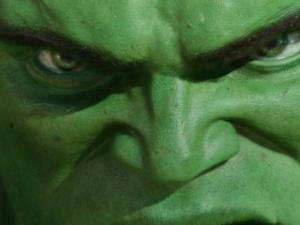 Bruce Banner becomes the Hulk when he is hit with Gamma rays. Peter Parker is bitten by a radioactive spider and becomes Spiderman. Barry Allen turns into the Flash after being struck by lightning in a chemistry lab. The Fantastic Four gain their powers from cosmic rays and Dr Manhattan is born when  Jon Osterman goes back to retrieve his pocket watch from an Intrinsic Field Generator chamber and gets locked in. Are any of these viable ways we can get superpowers?

Some interesting examples here! Many of them are focused on radiation, the sad truth is that none of these events would create the superheroes that we know. Radiation can be classified into ionizing (IZ) and non-ionizing (NZ). IZ is the really dangerous radiation; essentially it can ionize atoms which means it can damage the DNA we find in every cell of our body and ultimately cause cancer. X-Rays are the ‘weakest’ form of NZ radiation, then gamma radiation and finally cosmic radiation. Patients are sometimes exposed to X-Rays but in very small doses for specific medical processes, but you cannot have too many over a discrete time period as the effects of x-rays are cumulative (they build up) I am sure you have noticed that x-ray operators sit behind a thick wall with some lead somewhere between them and the x-ray source.

The Fantastic Four are bombarded with cosmic radiation (rays is an incorrect term allocated by scientists who initially thought they were rays!) but the Earth’s atmosphere shields us from the worst of their damage. Interestingly, the effects are worse the higher you are in the Earth’s atmosphere and airline crews are exposed to higher levels than a normal traveller.

I realise this puts a bit of a dampener on anyone trying to get superpowers! But this is where science can help us to achieve our dreams! We can all increase our muscle mass using traditional means of exercise, we could even take artificial substances such as anabolic steroids (a drug that is similar to the sex hormone testosterone that stimulates new muscle growth and allows shorter rest periods between exercise) but these have some very nasty long term side effects such as liver damage.

One alternative can be found in the field of nanotechnology. Dr Ray Baughman and his team at the NanoTech Institute, University of Texas in Dallas, have developed artificial muscles 100 times stronger than our own, powered by alcohol and hydrogen. These muscles are made of incredibly small fibres only a nanometer wide (a nanometer is a billinonth of a meter)  that when combined are extremely tough.

For example; the current world record for weight lifting is a 266 kg (586 lbs) held by Leonid Taranenko,. If Taranenko’s natural muscles were replaced with Dr. Baughman’s nanotechnology muscles, he could lift 26,600 kg, or about 30 tons. The difficult bit is actually weaving the fibres into a human body – which, today, would be complicated and messy, not to mention probably illegal! Interestingly these new fibres would form a sort of natural armour and may even be able to provide protection against bullets, very Hulk like!

A lot of Superheroes started out as scientists, or science plays a major part in granting them super powers. Is this the real reason you chose a career in science?

No that’s not the real reason! But a large number of Superheroes have scientific origins; Spiderman, The Hulk, The Flash, Dr. Manhattan and other such as Susan Storm and Reed Richards, Captain America and many others were created by scientists. The same applies to the villains, Dr. Octopus and the Lizard to name but a few…  it’s really interesting that science fiction and comic book fiction take a root in science to add to the plausibility of the hero!

If you could have superpowers what would they be?

I would go for teleportation! I’d save so much time travelling between places, straight from work to home, from home to a nice hot beach somewhere sounds awesome!

Richie Janukowicz has been a cameraman, knight, web developer, farmer, graphic designer, telesales agent, carpenter, gardener and chef, though not necessarily in that order. He has been forced by Officers of Her Majesty to sign the Official Secrets Act. Twice. He possesses a deep and unwavering love for playing acoustic guitar, dissecting movies, reading fantasy and science fiction, superheroes (both real and imagined), martial arts and bacon. Right now he's trying to juggle a blossoming writing career with being a full time dad. He enjoys the challenge, but would like some more sleep.
You might also like
breakingcomicsinterview