Dragon’s Claws, Simon Furman, and My Introduction to American-style Comics.

Flashback to 1988, I’m an 8 year old kid, and my idea of comics ranges from British instituitions such as The Dandy and The Beano, to several titles my brothers would pick up, including Eagle and Marvel UK’s Transformers.

Then something new appeared from Marvel UK. Named Dragon’s Claws – which was rather odd, I thought – it was Marvel UK’s first attempt at an American format comic. This was way before a reliable distribution network: back then, only newsagents sold the hodge-podge mix of various British comics aimed at kids with the occasional American comic.

Dragon’s Claws was the creation of Simon Furman and Geoff Senior, writer and artist of the acclaimed Tranformers UK comics which I was an avid fan of, even if I didn’t understand the rather mythological and epic scope of Furman’s writing at the time: writing which would guarantee his name would forever be associated with Autobots and Decepticons.

Taking influence from 2000AD’s dystopian futuristic science fiction, and 70’s films Rollerball, The Warriors, and Live Aid, Dragon’s Claws was set in the far future of 8162, in a world wracked by overpopulation, food shortages and environmental disaster. To distract and pacify the population, the World Development Council creates ‘The Game’.

The Game ,which is only briefly alluded to, pitches teams of garishly armored assailants against each other in a contest which blends gladitorial combat with strategy and 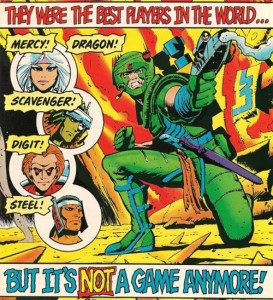 sport. Before long, though, The Game itself descends into anarchy culminating in the ‘Miami Bloodbath.’

What made it so appealing was, even disregarding the story – the deeper layers of which were completely lost on my young self – was the great art from Geoff Senior, the great characters, the action, and its surprising brutality. Most of all, though, as my younger self would say, it was pretty damn ‘cool.’

It also fed into my idea that sport was an activity which had only one purpose, grievous injury at the hands of people bigger and more intimidating than you, and you had to be somewhat mentally unhinged to voluntarily engage in it.

Dragon excelled at anything sport related. Growing up in an orphanage, headstrong and possessing a volatile temperament, he was born for The Game. His early experiences ended in disillusion and tragedy, though, prompting him to disappear before returning several years later with the Claws, after a stint as the leader of a squad of commandos in the war zone of Sudan.

Dragon’s team consisted of Steel, a samurai who, despite his intimidating appearance, and being the muscle of the team, has a distinct code of honour, and a deep bond of  mutual respect with Dragon.

Mercy, the daughter of a wealthy corporate magnate, first joined The Game to track down those responsible for killing her father, before brutally assassinating them. Dragon made a deal to save her from jail time for the murders: in exchange, she joined his team.

Digit, a genius who became a leading authority on computer systems. He mysteriously disappeared to be found several months later in a Game arena having being tortured and shot in the head. Technology he invented saved his life: Digit is now a cyborg with cybernetic eyes and a bio-organic computer replacing the damaged portion of his brain.

Scavenger, the most mysterious member of the team, Dragon offered him a place on his team after witnessing his flair for improvisation to overcome a rival team.

These weren’t the regular heroes you got in comics like G.I Joe or Dan Dare: they were flawed, dangerous, edgy, and intriguing. And these were the good guys! With good guys like that, the bad guys had to be really bad and sadistic. Sociopath Slaughterhouse and his team ‘The Evil Dead’ didn’t disappoint. 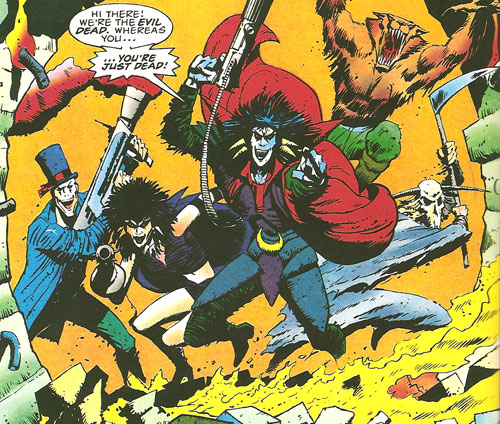 That’s how you make an entrance.

Briefly introduced in issue #1 taking out guards from the shadows, it’s here where the brutality and kinetic nature of Senior’s art really pops, as Slaughterhouse, Death Nell, Feral, Hex and Kronos take on the guards in a high security arms depository they have been laying siege to, only this time the reader sees everything in all its twisted glory.

A wise cracking guard confronts Feral, remarking ‘I can still teach you a thing or two….. like how to dance,’ only for Feral to dodge his gunfire, leaping on the terrified guard, jaws dripping with saliva, to answer, ‘Feral only dances…….with a partner.’ Another scene has Hex mesmerising a guard into relinquishing his gun with the refrain, ‘So let’s run through this again. I’m dead and you’ve got the gun.’

The highlight, though, was the malevolent glee behind Slaughterhouse’s actions, and his taste for the theatrical, living up to the old rule of the villain being more appealing than the hero. When the sole survivor of the raid asks him why they are doing this, Slaughterhouse replies, ‘You don’t know? Because my friend………we like it!’

The real genius of Furman’s writing was being unafraid to have half of these characters killed in a single issue, with only Slaughterhouse and Death Nell surviving. This was not only brave from a writing point, but also established that the Claws really were good at what they do, whilst establishing a seething animosity between Dragon and Slaughterhouse that would burn throughout the series. 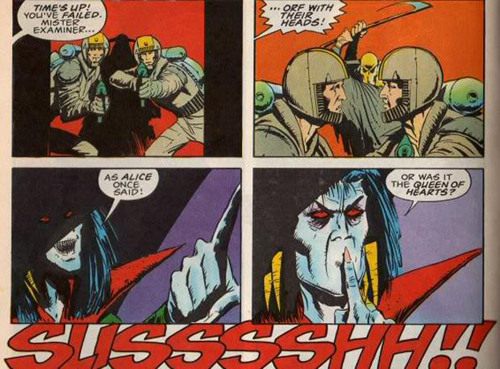 Slaughterhouse and his sadistic sense of humour as aided by Kronos.

Colliding with the TARDIS whilst travelling through a time vortex caused both to materialise. The Doctor didn’t appreciate Death’s Head’s bad attitude, so shot him with a Tissue Compression Eliminator, a weapon stolen from The Master. This shrank the mechanoid to human size. The Doctor then launched him into the far future via the TARDIS: 8162 to be precise. 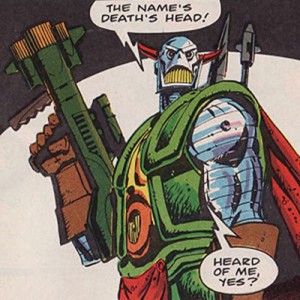 This far future setting allowed for an ‘anything goes’ approach: the team have a ship called The Pig; in one issue, Steel encounters soldiers riding robot horses; the landscape is a mix of sky scrapers, teeming streets, neon signs, crumbling industrial ruins and waste land; there are numerous vehicles featuring throughout along with roaming street gangs, mad religious zealots, mutants and shady corporations as the story unfolds.

As great as Dragon’s Claws was, it only lasted ten issues due to a fledgling comics market and poor sales, it being lost in the racks due to its small size, and disapproving parents not allowing their children to pick it up.

Furman managed to wrap up most of the story, although plenty of potential remained, with events tied to several characters’ pasts unresolved. One was Death Nell and Steel being a couple at one point. Seeing how that relationship developed and fell apart, and the fall out, was ripe for exploration, but it wasn’t to be.

Dragon’s Claws was my introduction to American style comics, and, whilst I continued to vicariously read Generation X amongst other titles, Dragon’s Claws really seeded in my mind the idea that comics didn’t have to be about superheroes that saved the day. This notion was the basis for my discovery and love of 2000AD in the mid 90s, a treasure trove of enduring characters which couldn’t be further from Marvel and DC’s omnipresent raison d’être.

Andy Haigh started writing to counteract the brain atrophying effects of Retail Hell, now it's an addiction. Andy is an unrepentant sequential art absorbist and comics are one of his passions. Other interests include Film, Music, Science Fiction and Horror novels and quality TV like Game of Thrones. He can talk about these at great length if only someone would listen. He lives a somewhat hermit like life in The Shire, spends too much time on social media and is still waiting to go on an adventure.
You might also like
breakingcomicsSimon Furman