previous
Video: First Impressions - when superheroing gets in the way of dating
random
next
Persona 5 Announced for PS3; Coming Winter 2014

Every Single Living Doctor Takes Part in 50th Anniversary After All 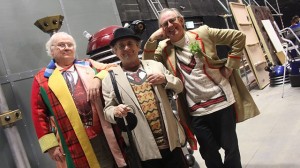 After a lot of umming and ahhing and debate about whether the living actors who played the Doctor in the “Classic” era of Doctor Who would take part in The Day of the Doctor, it turned out that they did… sort of.

Whereas Paul McGann was part of the absolutely brilliant minisode the Night of the Doctor and Tom Baker got a small walk on part in the episode proper, Peter Davison, Colin Baker and Sylvester McCoy got to be the stars of their own anniversary special, “The Five(ish) Doctors Reboot” about the very fact they were snubbed from the special (or were they?).

Written by and starring Peter Davison, the half hour special on bbc.co.uk is absolutely sidesplitting, partly because it has all the in-jokes, silliness and references they couldn’t cram into the already long Day of the Doctor episode; but also on the lengths the entire cast and crew go to make fun of themselves, right down to little things like Davison calling in favours from his son-in-law (who just happens to also be the Tenth Doctor), Sylvester McCoy’s barely-veiled boasting about his ten minute role in The Hobbit, Paul McGann’s “Filming commitments” and Colin Baker telling us what we already know about Vengeance on Varos!

It’s sharp, witty, clever, laden with self-depreciation but at the same time filled with a love and admiration of the series, its fans and its legacy, which shines through despite clearly being a bit of a silly low-budget runaround. It is an absolute delight, and definitely worth a look in case you feared that the only way the John Nathan Turner Doctors would be involved is via stock footage and Madame Tussauds.

The truth is rather more shrouded than that…