Everybody takes the G.O.A.T.: Why I love Fallout 3 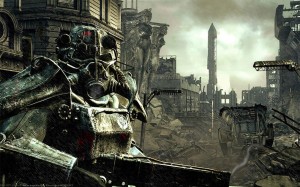 Alas,  Bethesda’s recent teaser and announcement was revealed as a new project involving Resident Evil creator Shinji Mikami called ‘The Devil Within’ which promises to take survival horror back to it’s trouser-filling core. Whilst this definitely sounds like a promising idea, I couldn’t help feeling slightly disappointed as the media hype surrounding the teaser only reminded me of how much I love the Fallout series and, specifically, Fallout 3.

I don’t want to set the world on fire….

Firstly, I have to admit outright that I am not a Fallout purist. I’ve never played the original top-down RPG’s at any great length (somebody really should port these to iOS and Android) and due to some rather severe phobias involving certain creatures including cockroaches, rats and scorpions,  I have only ever been able to play the Bethesda published open-world sequels on the PC using replacer mods. Some hardcore fans may argue that I have meddled with the designer’s formula and ruined these games for myself, however I challenge those people to try my modded ghoul ridden vision of the Capital Wasteland for themselves before dispensing judgement. What remains important for me however is that this community-developed content allowed me to experience a game like no other I had ever played before and for that I will always owe them a debt. 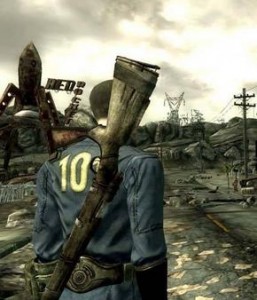 The Lone Wanderer: Bethesda purposefully give a generic title to Fallout 3’s protagonist to help the player feel at one with their unique vault dweller.

We’re born in the vault….

For the uninitiated, Fallout 3 built upon a franchise created for the PC by Interplay in the late 90’s and it’s subsequent sequels. Released in 2008, Fallout 3 is almost entirely disconnected from the original games although certain factions and lore remain the same. It tells the story of a vault dweller born 200 years after the world has nearly destroyed itself using nuclear weapons. Players customize their character from the point of birth, witnessing the world of an underground totalitarian bunker and building their basic skills and attributes through a series of monumental childhood events such as a 10th birthday party and a high school graduation exam before being forced to escape the confines of Vault 101 towards the terrifying and hazardous world above. I fell in love with that world from the first moment that I laid eyes on it.

What first struck me about Fallout 3 is the sheer vastness of the game world. Fallout 3 is absolutely astonishing to look at and was a genuine technical achievement when it was released nearly 5 years ago. Even though the world consists of only a single human player, almost every moment feels like it is completely unique and unexpected. A student of game design or seasoned RPG player would be able to immediately spot the standard formulas in use, e.g. the player will encounter weaker enemies and simpler quests at first as a means to level up etc, but in Fallout 3 it remains entirely possible to leave Vault 101 and head in the ‘wrong’ direction, leading to either certain death or a completely unique gaming experience, dependent on how well you can fight and adapt.

The design of the world is based on a 1950’s Sci-Fi cliche of a post-nuclear apocalyptic America only with a noughties twist. The player carries a PDA-style Pip Boy 3000 around which glows an eerie retro green, controls character and game options and enables some of the best in-game radio stations this side of Grand Theft Auto. The music on those radio stations along with the announcers and DJ’s is incredible and builds on an already amazing soundtrack which could actually stand out on it’s own even without the game as an accompaniment. 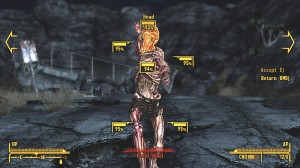 The last outstanding feature of the Pip Boy is V.A.T.S. which allows players to freeze mid-battle, target a specific area on an enemies’ body and make a critical strike, which can lead to some seriously gruesome slow motion scenes.  Heads explode in gory detail, limbs get dismembered and some of the larger creatures in the later stages of the game will be either seriously irritated or entirely decimated depending on your choice of weapon. Fallout 3 is an extraordinarily violent game but this isn’t an experience that was designed for families and because of that the game isn’t afraid to tackle some other subjects which many other artistic works would go out of their way to avoid.

Are you taking Jet over here?….

The 2227 Capital Wasteland is an ugly place and not just aesthetically. Humanity as we understand it no longer exists and man has been split back into smaller feudal societies, each looking to ensure their own survival or improve their lot by any means necessary. Those humans most affected by radiation became zombie-like ghouls of either the feral or sane nature and are largely ostracised by those other survivors  who managed to keep their physical forms slightly more in tact. Women and children are fair game for slavers and rapists and the power to deal in drugs, enslave, cannibalise or even commit mass-genocide  is placed in the hand any player with a darker side. Only Bioshock springs to mind as a game of this generation which has even come close to giving the player the kind of choices that Fallout 3 does in a world where law and common decency don’t exist but in Fallout 3, almost nothing is taboo. Every single action has a consequence and Fallout 3 is a rare interactive experience which can actually make a player question their own sense of morality. 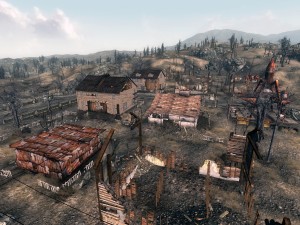 Andale: small towns like this are home to some of mankind’s last survivors and occasionally to some dark secrets.

Bottlecap for your thoughts….

In an industry where many products seem to be going down a more big budget and faceless path, Fallout 3 stands out as a game which I will likely remember for a large part of my life. The level of openness is like nothing I had experienced before and like nothing I have experienced since and I still find myself occasionally longing to go back and play it. Fallout 3 is the kind of game that will still be discussed around a table with a group of friends for years to come and it is likely that no two play throughs will ever be completely the same. Each player is actively encouraged to project their own personality and judgement into their Lone Wanderer avatar which will then have massive consequences within the gaming world. I often cite Bioshock as being my choice for the most important game of this generation as the choices which it introduced left a lasting impression on almost every player who experienced them. However all of those choices still ultimately remained within the narrow path lines of a heavily structured narrative. Fallout 3 blew that system out of the water by creating a virtual world with a sense of completely open decision-making and progression and whilst Fallout 3 was far from being the first mainstream open-world RPG, it was possibly the first one to include some of most openly adult and culturally-sensitive themes yet experienced within the console space. Fallout: New Vegas and Skyrim further built upon some of Fallout 3’s ideas however Fallout 3 will always remain a game close to my heart and I really look forward to seeing where Bethesda take the franchise during the next generation.

Fallout 3 Game of the Year Edition is available now on Xbox 360, PS3, and PC. For more information on mods for the PC version of Fallout 3 visit http://fallout3.nexusmods.com/

A proud member of the Geek Pride video games editing team, Sai can currently be found trying to get through his Christmas games backlog (and failing miserably at it).
You might also like
Bethesdabreakingfallout