5!…. 4!…. 3!… OK, you get the idea. In conjunction with its 50th anniversary, a new co-operative board game based on the classic TV series Thunderbirds is going to be produced this year by Modiphius Entertainment (Achtung! Cthulhu, DUST Adventures) and designed by Matt Leacock (Pandemic, Forbidden Island). TBtBG will see players taking on the roles of the Traceys in an effort to do what they did best: saving the world! 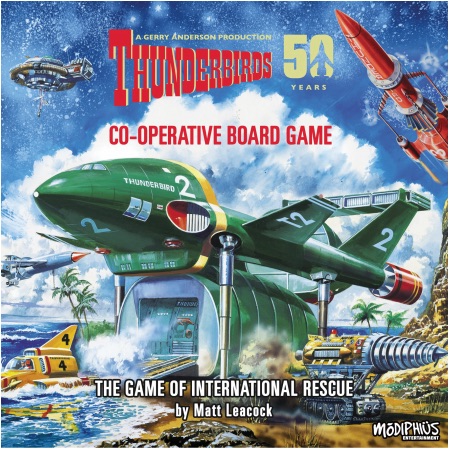 The artwork for the box

“Thunderbirds has always been the geek dad brand of choice as people introduce models of Thunderbird 2 or the original TV show to their kids,” said Chris Birch, Publishing Director of Modiphius.“From collecting the models and avidly watching the shows as a kid, it has been a dream of mine to create an awesome game with Thunderbirds. With Matt Leacock on board, I know we’ll be able to create the ideal co-operative gaming experience for whole families to enjoy the Tracys’ world. F-A-B!”

Much of the design work has already been completed, including minis for all the vehicles from the series and a Kickstarter campaign has been earmarked for February to generate funds for the production run (although I’m sure the additional marketing provided by a KS campaign has been an intended side effect!) with a planned release for Autumn/Winter of this year.

With such publishing and design pedigrees behind this game and the popularity of the original show, will this be a success? Are there enough Thunderbird fans remaining in the world to give this game some love? Only time will tell, but this is definitely one to watch for 2015.

Are there any TV shows from your youth you’d like to see given the board game treatment? Let us know in the comments below or hit us up on Facebook and Twitter!

An avid board and card gamer, this displaced Cornishman has spent way too much time playing games and skulking around his local hobby shops. He later escaped to Swindon, the land of roundabouts, where he currently designs games whilst infecting those who stand still too long with his gaming lurgy.
You might also like
Achtung! Cthulhuboard gamedust