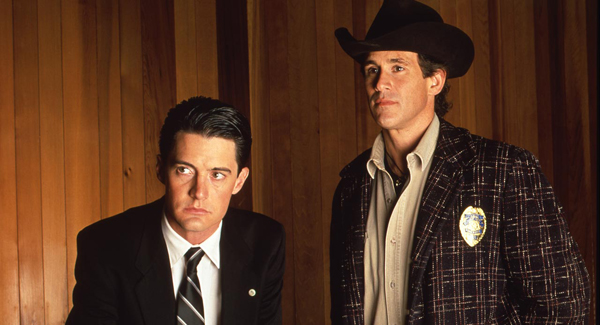 One of the most surprising developments in TV for years is the announcement that Twin Peaks, the cult hit which originally aired in 1990-91, is returning on Showcase for a new series coming in 2016.

The original series revolved around FBI agent Dale Cooper (played by Kyle MacLachlan) investigating the murder of home coming queen Laura Palmer (played by Sheryl Lee) in the small Washington town which gives the series its title. The murder sets of a chain of events within the idosyncratic town as Cooper tries to track down Laura’s murderer .

Twin Peaks was notable for numerous reasons; one being it was co-created by David Lynch (along with Mark Frost). Lynch has become infamous for his surrealist films like Eraserhead and Lost Highway. The series shares Lynch’s surrealist touch featuring numerous memorable characters Margaret Lanterman, better known as Log Lady due to cradling a log like a child wherever she went, being just one example.

The new series which will be written by Lynch and Frost will be set in the present day and continue storylines established in the second season with Lynch himself planning on directing the 9 episodes. On the show returning after over 20 years Frost said,

“For those followers of the show who felt bereft when the show ended where it did all those years ago are going to like where it goes from here, and we hope that a lot of people who haven’t been to Twin Peaks yet are going to be equally interested in where the story goes from where we left off.”

Lynch tweeted this announcement to fans. 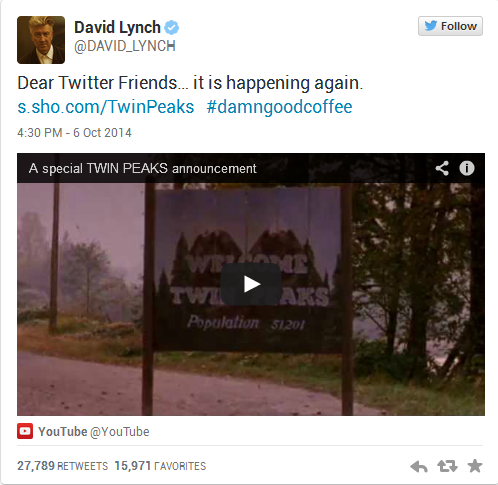 Andy Haigh started writing to counteract the brain atrophying effects of Retail Hell, now it's an addiction. Andy is an unrepentant sequential art absorbist and comics are one of his passions. Other interests include Film, Music, Science Fiction and Horror novels and quality TV like Game of Thrones. He can talk about these at great length if only someone would listen. He lives a somewhat hermit like life in The Shire, spends too much time on social media and is still waiting to go on an adventure.
More Goodness
David LynchKyle MacLachlannews