SPOILER WARNING: THERE ARE ACTUALLY NO SPOILERS BUT I’M SURE YOU’LL FIND SOMETHING TO GRIPE ABOUT.

In the second installment of Anchorman , we see a dejected Ron Burgandy ( Will Ferrel)  once again assemble the News Team and rise  to power as lead anchor of GNN: a 24 hour news system.

The film is hilarious, with the cast working as well as they did in the first, with just the right amount of physical humour to make you spit out your drink. Also there’s a shark!

Every character makes a welcome return, and the writing hasn’t changed much, this is a film that tells you to take the seatbelt off,and come for a comfy ride along the lives of a few good newspeople (so long as you’re not in a Winnabego, with bowling balls and scorpions….Watch the film).

What really makes this stand out  though is the social commentary aspect of the GNN plotline. As the plot unfolds, we learn that in order to take the top spot, Ron must come up with a new way to tell the news. His solution is simple: hyperbole. It is a clear attack on the likes of Fox News and the prevalence of sensationalism over honest newscasting and the point is put across eloquently,  driving the main storyline forward to quite a poignant conclusion about the ethics of corporation-owned news. 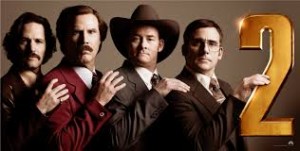 All of this aside, there is a problem. A problem that I am going to henceforth call  “The Minion Issue”. Allow me to explain:

Despicable Me (also starring Steve Carell-see? not even a tangent) was a touching film about an evil genius who unwittingly adopts three challenging girls. At first, he finds caring for them  almost impossible, but soon they melt his heart. There is also secondary plot regarding a new super villain and the capturing of the Moon. Oh, and there are minions; Gru’s (Steve Carrell) yellow henchmen. In short (pun intended) they are a funny addition to a solid, if somewhat Todorovian plot.

Despicable Me 2, however  almost entirely scrapped the plot and focused on the Minions. This completely diluted the storyline, and  potrayed the supporting (previously main) characters as 2D, merely filling in the gaps between those God-Damn-They-Are-So-Funny-Better-Show-Facebook Minion scenes. The front cover of the Blu-Ray and DVD is entirely Minions. The Minion Issue is this: Taking a single thing that was good, and making it almost the entire plot or content of a se/prequal . 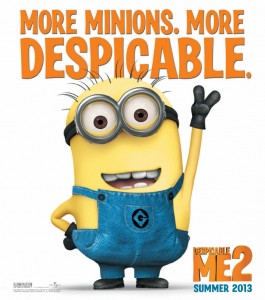 On a serious note, Fuck Minions.

The Minion Issue with AM2 is , among some other things, Brick (Steve Carrell). Now I love Mr Tamland as much as the next guy with a sense of humour but this installment took it too far. Almost every conversation of the News Team felt like a set up for a Brick joke. His romance storyline was interesting  but again felt trite, becoming another vehicle for Brick’s antics.

Another issue I have is with the final fight scene. I realise that stating something was random in an Anchorman film is like bashing Man Of Steel for plotholes, however the fight really did have no place in the third act. It felt like filler, and a chance for cameos galore, over too quickly to feel epic. The explosions were pretty cool though.

Think Mike’s wrong? Grab a conch shell, call your News Team and let’s fight it out in the comments below. Milk is always a bad choice.

Hailing from Kent, England, Mike is a writer, editor and podcaster who has just finished his degree at CCCU. He also is a drummer of 11+years, plays in several bands, and is available for session work. His other interests are Batman, music which doesn't suck and pizza. Follow Mike @The_Dark_Mike
More Goodness
Despicable MeMike OrvisPaul Rudd