previous
Top 5 References Proving Sterling Archer is a Geek!
random
next
Venom Spin-off is a go!
Film and TV
1 like

Arrow – An inmate by any other name…

I remember a while ago there was some stir caused in the Arrow fandom by the presence of a specific promotion for Episode Sixteen of the second season of Arrow – an episode called ‘Suicide Squad‘.

Here, let me get that for you.

Blonde pigtails…white make-up covered skin…either Felicity had a wild weekend party, or this could be…

What caused the stir, interestingly enough, wasn’t the presence of the team itself – which, as an Arrow fan I am completely stoked for – but the presence of a certain individual who kind of belongs in a different part of town. In fact, a different city. Gotham, to be exact.

With Arrow being no stranger to borrowing villains from other cities (Firefly, I’m looking at you here), it doesn’t come as a shock that they would introduce familiar characters. However, given the reaction, I don’t think people were quite expecting Harley Quinn, the proverbial Batgirl to Joker’s Batman, to make an appearance. Or…something along those lines. She hasn’t been ‘officially’ announced yet.

Actor Cassidey Alexa was rumored to be playing the pale-faced psychologist gone off the deep end and this deleted picture from her Twitter account served only to fuel these rumours.

Thankfully, it seems that the casting has been well received – with her Twitter account bursting with praise and hopes of fanboys and fangirls alike. The most recent confirmation came from Michael Rowe, who plays Deadshot in the series, when he posted the following cast picture on his Instagram account of the Suicide Squad revealing Cassidy Alexa as officially part of the Suicide Squad crew…as well as including #HarleyQuinn when listing the characters. 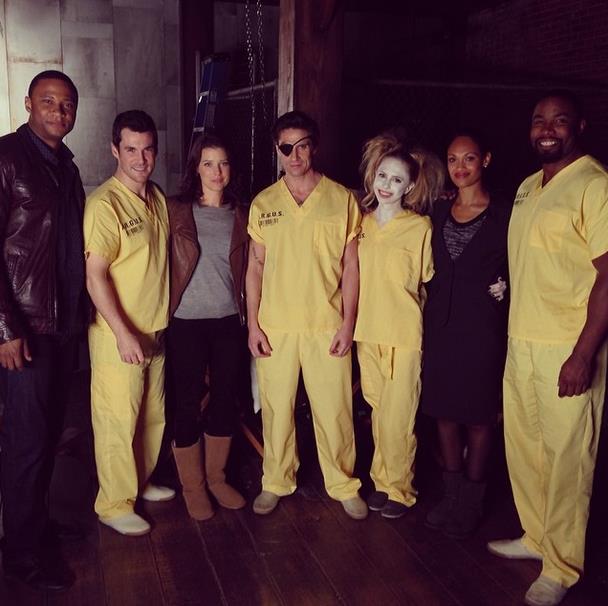 The gangs all here…

Footage has also found its way online, with two major indications that this is in fact our Harley: She mentions that she is a trained therapist, and…she is voiced by Tara Strong, who has provided the voice of Harleen Quinzel in the Arkham series as well as Injustice: Gods Among Us. Although she is credited as ‘Deranged Squad female’ in the credits, it’s kind of hard not to connect the dots.

My initial reaction was…intrigued, if not a bit skeptical.

Wait, hear me out before lighting those torches, and sharpening those pitchforks.

I love it. An Easter Egg for the fans to enjoy, and a good one at that. It doesn’t appear forced and sits in nicely with the continuity – in the DCnU, Harley Quinn was part of the Suicide Squad when the series got rebooted along with the rest of the DC Universe. However, even Arrow EP Marc Guggenheim said he didn’t expect the cameo in the preview, and stated (via Collider):

I want to manage expectations with respect to Harley Quinn.  She was always intended to be an Easter egg.  I don’t want people to go in with incorrect expectations and walk away from Episode 16 disappointed.  But there is an element to the Easter egg that was not spoiled by the promo, that I think people will find a lot of fun.

So, to have a character physically played by an unknown actor, and yet to have an iconic voice actor do the voice…it makes me think that she is really just that – an Easter Egg. Fans heard about it and got too hyped up.

Yet, despite this skepticism, I am intrigued – due to the reception of the character – could we see her return? The guys running the show were surprised at her popularity, even if her appearance was fleeting. Could this influence them to write more Suicide Squad episodes? In the footage we see that Shrapnel, Deadshot and Bronze Tiger are just three of several incarcerated villains. Harley Quinn is just one of the ones not allowed to go on this particular mission. It is entirely possible that we see the Suicide Squad make a return, with more characters in its roster.

Don’t forget that Captain Boomerang is canonically part of the team. We could even see them in The Flash series, if the character gets introduced.

I read. I write. I play.
More Goodness
ArrowDCharley Quinn