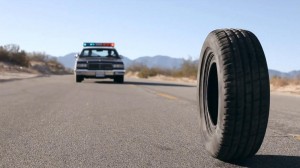 This is as good as it gets…

“Ladies, gentlemen, the film you are about to see today is an homage to the “no reason” – that most powerful element of style. “

I hadn’t heard anything about this movie, and the write up was oddly compelling. Two of us in the group are big fans of inanimate killer movies, and have planned entire evenings around the mini-genre before. Don’t make the mistake I did. Now I am a movie geek, and a total horror buff, but seriously. This is not a film made for viewing pleasure. This film is made for film studies students to wax lyrical about and write essays about how the director is a genius and it “subverts the conventions of the genre”. I plan to entirely spoiler the movie – do not read on if you intend to watch this film.

The film opens with a mysterious monologue from some guy, about how “no reason” can be the driving force behind a story, then pans to a crowd of poorly dressed tourist types, out in the desert with folding chairs and binoculars. I think there was some brief backstory for some of them, maybe just some conversations. They all proceed to start watching ‘the event’, and so do we.

Out in the desert, observed by this crowd, a tyre comes to life and starts learning how to roll around. This takes a very long time. What you see on screen is exactly what I’ve said – a tyre, pushed into shot, rolling around in the desert. Quite a lot of this happens, with some real white knuckle moments, like when it finds a rock too large to roll over. Eventually the tyre learns it has another option – exploding things with its brain! Starting small it explodes a can or a bottle or something, then very quickly expands to blowing up people’s heads. On screen this consists of a shot of a tyre shaking a bit, then cuts to someone screaming and falling down. We don’t really get to know any of these people and they don’t last very long.

Throughout this the interested crowd realise that their tour guide has left them and they have no food. Most of them choose the easy way out, eating poisoned turkey. I’m sure this is some metaphor about the role of the audience. Whatever it is they are trying to prove, I am happy to conform! 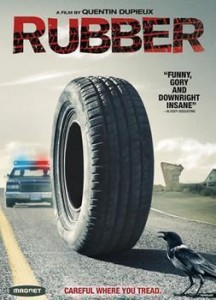 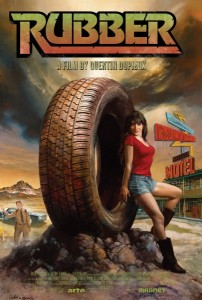 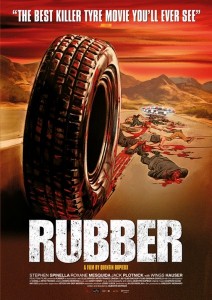 I suspect these posters took longer to put together than the movie itself – especially the one from Boris Vallejo! (centre)

My bad movie team and I had to take a break. Bear in mind at least two of us have watched Eraserhead more than once. We came back to the film and the same shit kept happening. I honestly don’t remember anything else happening. Tyre rolled around, a few peoples heads exploded, tourists got hungry or died. We did our best but our evening was pretty much done, and we decided we still had the time to attempt an actual movie, so we quit, only to find out we were only about 15 minutes from the end of the film! Still, we couldn’t take any more of it, so we just decided to let our brains do the work and make up a more entertaining ending for ourselves. I tried, but all I can imagine is that the same shit happened for another 15 minutes then it rolled credits to a room of disappointed viewers. If anyone has stuck it out to the end please spoiler away!

That’s two hours of my life I’ll never get back!

I'm Mel, currently living in Sheffield, but originally from the other side of the Pennines. I'm a lifelong gamer, RPing from a worryingly early age, and basically raised as a geek - I don't think I ever had another option! Any spare money I have gets spent on comics, photo gear or lucha masks, and any spare time I have, when not gaming with friends, is wasted on Sims, Minecraft and trashy movies.
More Goodness
breakingFilmhorror