Do you know what this world needs? Aside from more Dragonball Z Abridged episodes and a general lack of Donald Trump? Now, I’m pretty sure that the last thing you would have said would be ‘A Mary Poppins Sequel’. Because who in the hell wanted or needed a new Mary Poppins film?

Well, someone in Disney seems to want it/the ridiculous amount of money they will sadly somehow make out of this cold, soulless move, because we’re getting a new Mary Poppins. Titled Mary Poppins Returns as though she were Batman – which would admittedly be a very interesting take on the character – we should expect this sugarless medicine to appear on our screens on Christmas Day in 2018.

Starring Emily Blunt and Lin-Manuel Miranda, Mary Poppins Returns at least isn’t going to be set in the modern day. Set in London between the two World Wars, Poppins will reappear in the Banks’ lives when they are adults, having completely forgotten the weird wonder that she brought into their lives when they were children. Lin-Manuel will play Jack, another cockney chimney sweep who definitely will be completely different from Dick Van Dyke’s Bert in many ways.

With the number of creative people working at Disney and their sheer budget following the ridiculous successes of the last few Marvel films and The Jungle Book remake, you would have thought the House of Mouse could take a few creative risks and create some a new franchise. Instead, sadly, they are banking on nostalgia and people’s childhoods for money.

Which, in fairness, they sort of did with Star Wars: The Force Awakens… 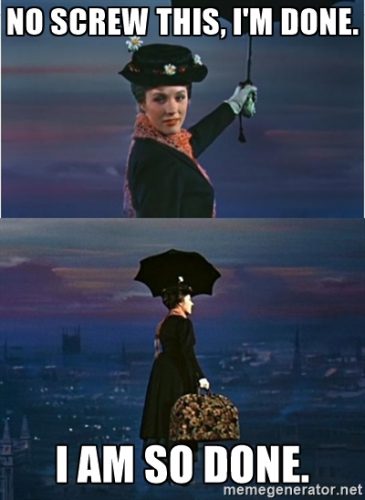 Sean is an editor, writer, and podcast host at Geek Pride, as well as a novelist. His self-published works can be found at all good eBook stores.
More Goodness
DisneyEmily BluntMary Poppins