by Jonjo Cosgrove on 03/10/2019
Details
GenreActionHorrorSuperhero

Inspiration from the action and horror genres help create some good beats.

This won't stay in your mind for too long.

A decent soundtrack without many stand out moments!

Who remembers 1998? Or even a time when the cinema wasn’t swamped with superhero movies? Yes, there was such a god-less era! Films based on comic books were rare, but not  unheard of. But it isn’t just the films themselves that stuck out for those who went to their nearest UCI, Odeon or…whatever cinema was around in the 90’s. Anyone remember Warner Village Cinema? Well, the music was also something that stuck with many of us.

Aside from Danny Elfman’s legendary Batman soundtrack and the unmistakable excellence that was John William’s Superman music, there wasn’t many superhero films that had a collection of songs that were as note-worthy as the movie itself. In steps the 1998 horror-comic adaptation of Blade. The film that showed Wesley Snipes could be cool, rude but not exactly a party dude! I watched this film a long time after it was released, and while the movie itself may not hold up to well, the soundtrack that was actually a good reflection of its time.

Mark Isham composed the songs to fit around the rest of the soundtrack, which consisted of hip-hop, techno and rock tunes which for the late 1990’s was indeed what you would get in the charts at that time. The music is never overpowering, in fact if you are watching Blade you may accidentally not notice the themes at all in certain areas.

The album begins rather quiet, down and non-intrusive. All of a sudden, the tempo does suddenly build and you can almost hear the beats that would later help define the Sam Raimi Spider-Man era. It’s not a copy of what was to come, but the influence to what was to come is definitely present. Also, why did I think I could hear Metal Gear Solid? I swear Kojima must have heard these tunes and thought “Yes, I want something like this!”.

Apart from one or two spikes, I realise listening to this album that there isn’t a lot of big orchestral pushes. The soundtrack works more for background to fill the void than actually stand out on its own. It is sad, because there are moments that truly define this album and I just wish there was a little more excitement in this first half.

Starting the next side of this album, the range of vocal approach and tight piano work is just excellent. Have we suddenly been given another composer? There are little moments that are reminiscent to classic horror movies and big budget action films, there are sudden rises which sound like the intro for the perfect Dracula movie and we also get beats that bring to mind Point Break and Timecop (funnily enough, both were actually given their soundtracks by Mr Mark Isham as well!).

I reach the conclusion; we are treated to a haunting mix of whaling voices trying to be heard over a beat which sounds like a Caribbean beat. This then suddenly cuts off to become this powerful heroic theme where we know Blade must now be about to kick the arse of the big bad. That tune to indicate this is the final confrontation and that all the stakes have built up to this (Stakes and vampires, didn’t intend to make the joke, but it happened). Then, amongst the sounds that sounded like the superhero standard we may now know, there are glimpses of industrial metal which help propel this short composition to its grand ending.

Overall, this soundtrack is not in my top ten of all time. The second half is just epic, exciting and uses a great mix of influence from many other films and albums that have come before it. But, the first half does seem to lack. There is a lot to enjoy, but this film just can’t provide a blockbuster sound throughout.

Blade the movie may have its issues and possibly can’t hold up as well as it used to two decades ago, the soundtrack is very much in the same camp. There are redeeming qualities in this album, but I feel that without the various other songs that are littered across the film itself, the soundtrack just isn’t that exciting. It’s good and that is as far as it can go. But, I reckon hearing it in vinyl in its upcoming release will possibly give it an extra mark. 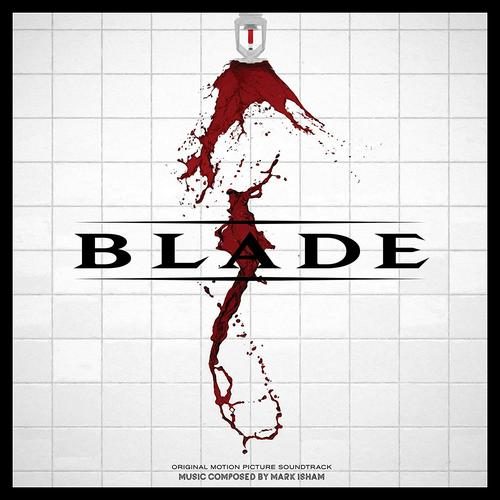 The cinema, a concert or in front of a TV is where you will normally find me! I will play Mario Kart listening to Iron Maiden, serve as the man in the middle of DC and Marvel, spend hours putting together Lego sets and will defend The Walking Dead till the day I die!
More Goodness
BladeMarvelWesley Snipes