previous
SDCC 2016: The CW Superhero Roundup
random
next
The Trainspotting Cast are Back in this Teaser for T2
Film and TV
0 likes

The emphasis on cycles means part of the series border on repetitive.

There’s an episode in BoJack Horseman season 3 entitled ‘The Best Thing That Ever Happened To Me.’ It is the start of a joke/horrendous cycle in which something terrible happens to BoJack, he realises that he loves Princess Caroline for a few weeks, and then kicks her to the curb in favour of someone else. BoJack Horseman’s third season is about these cycles, about patterns of behaviour that people get caught in and how they break out of them.

It’s also about silly animal people. Mr Peanutbutter comes from the Labrador Peninsula. It is shaped like a dog. 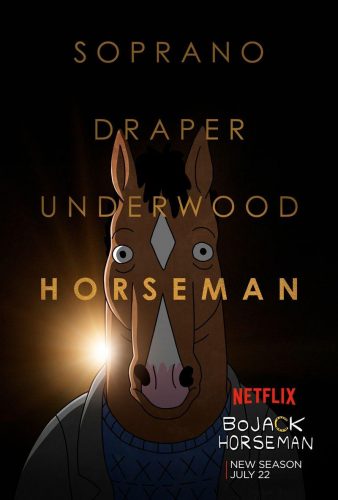 BoJack Horseman has long been a difficult series to define. If you are a rational human being and you love it, it can prove very hard to sell to other people. ‘It’s a cross between a silly comedy and a heart-wrenching, withered drama.’ The show has all of the hallmarks of a comedy like Airplane, with background jokes so dense you need to watch it a few times to get them all and sharp wit. It also ruminates heavily on depression, failure, relationships, and – particularly in this season – cycles.

Season 3 starts with BoJack on the Oscar trail, trying to drum up nominations for a film which he didn’t actually star in. In typical BoJack fashion, he struggles immensely with this, knowing that people who rave about the film aren’t actually giving him praise but the complex technical team who replicated him. Of course, BoJack gets stupidly drunk and spills the beans to a reporter.,,

I don’t want to follow the story throughout the season for fear of spoiling it, but BoJack Horseman takes on some tough themes during its third season, really stretching itself and displaying nuance in surprising ways. The abortion episode particularly stands out for this, with the ridiculous Sextina Aquafina displaying how over-the-top idiocy can help people through tough and horrible situations. Perhaps a shot at justifying its own tackling of difficult subjects, but it works. 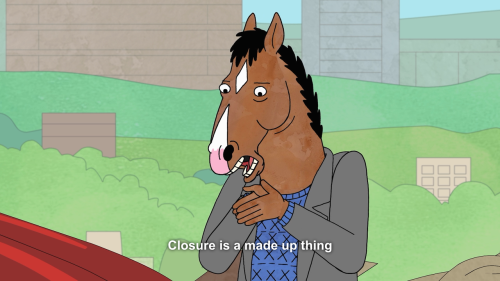 Mainly, though, it does cover cycles. BoJack is a destructive narcissist and he once again makes all the same mistakes. That would be one of the few criticisms I have for this season: much of the ground is recovered, with BoJack pushing people away or betraying them, and hurting himself in the process. Without wanting to spoil too much, this season differs in that there are real consequences for his actions, particularly in one gut-punch I will speak no further on.

This feels like a transformative season for the show, which is already confirmed to have a fourth season in the pipelines. We discover more about the characters, explaining some of their behaviours, and there seem to be some concrete next stages for the cast coming up. Politics, relationships… though not all of them break their destructive cycles. Even BoJack, potentially.

Something BoJack Horseman shouldn’t lose as it does it so well is callback humour. Season 3 is no exception: a well-placed ‘What are you doing here?’ pierces a sombre moment; Erica continues to make her offscreen appearances; and even Captain Peanutbutter has no luck when ordering signs… There’s even another bender episode, this time with blackouts that lend to some great jokes and wrenching moments.

BoJack Horseman will need to go to new places if it’s to continue its critical acclaim. And this season did show signs of the writers stretching their wings. There is an almost dialogue-free episode with a beautiful soundtrack, and narrative-breaking twists throughout. They also expand into other areas of the BoJack world, such as the aforementioned Labrador Peninsula, or the realm of the underwater manimals. With many of the same themes covered again, for the last acceptable time, the writers’ need to keep the show fresh is stronger than ever.

Changes are hinted at, with a few motifs toward fatherhood and a scene in the final episode, as well as Mr Peanutbutter’s bizarre offer, and hopefully the show will show real ambition in continuing to tell a very different story in a unique way.

But that is, as I said, a quibble. There are incredibly well-written jokes aplenty, beautiful pieces of drama, and revelations of just how certain characters have become who they are. One scene in particular, where we learn that BoJack’s selfishness may have been the final straw for Sarah Lynn’s innocence, still remains with me. BoJack Horseman’s third season is so gorgeously considered and thought through that anyone missing it is missing one of the best pieces of television this year.

Yes, that does include Game of Thrones.

Sean is an editor, writer, and podcast host at Geek Pride, as well as a novelist. His self-published works can be found at all good eBook stores.
More Goodness
Aaron Paulanimationbojack horseman